Characters from the various settlements across Fallout 4: Far Harbor. For other factions, look at their appropriate characters.

A collection of ornery fishermen, homesteaders and lumberjacks, the Harbormen are all that's left of the residents of The Island since the Fog pushed them out of their homes. Most of them are each so caught up in their own personal problems that nobody's capable of focusing on taking back the island or helping each other out. They have a vicious rivalry with the Children of Atom, who worship the fog that's killing the Harbormen. 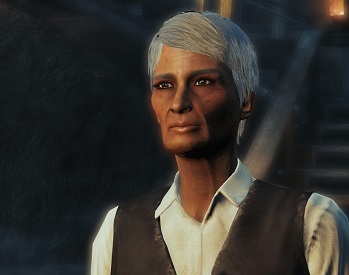 The de facto authority of Far Harbor, a strong-willed woman who, despite the nature of her home, desperately (with moderate success) tries to keep the residents of her home from attacking the Children of Atom and Acadian Synths, as she believes that attacking them will do more harm than good. 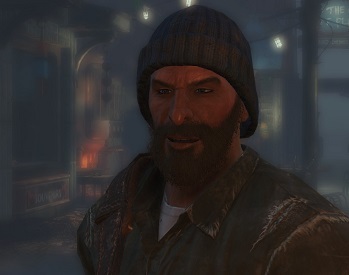 One of two people you first meet at Far Harbor, and its resident "friendly" neighborhood arms dealer. He's... unpleasant, to say the least. 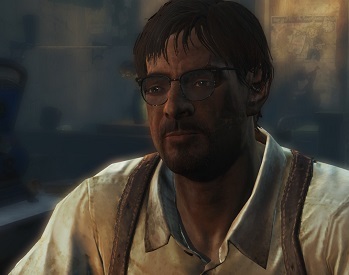 A relatively shady merchant and a Synth working for Acadia who runs the Bait Shop. 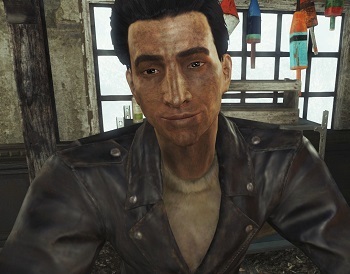 The owner of the Last Plank, Far Harbor's bar. 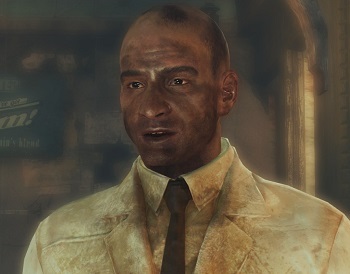 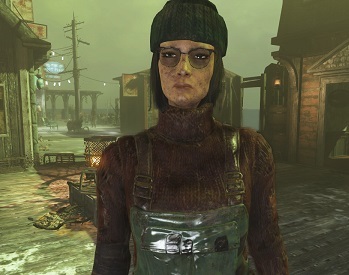 The original owner of the docks on which Far Harbor is situated. She maintains the Hull, the wall which protects the town form the irradiated creatures within the fog. 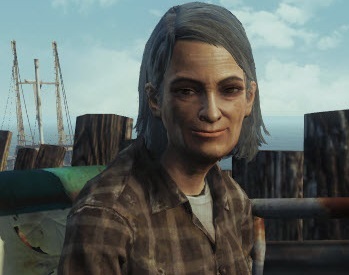 The last living member of the prestigious Dalton family who sends the Sole Survivor on a quest to get justice for her family by bringing down all of the things that the island used to kill her kin. It's never really made clear if she is just going insane in her old age or if there really is some force on the island that wants to eradicate the Daltons.

A Mirelurk hunter who was hunting with his husband, but was ambushed in the fog by a Mirelurk Hunter, and got turned around. He was badly poisoned and is on Death's door at the beginning of the DLC unless the Sole Survivor heals him. 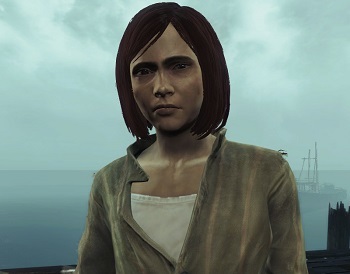 A poor girl who lives on the docks, taking care of her traumatized family member.

A mountain observatory in the middle of what was once a National Park, Acadia is now a colony for runaway Synths lead by what may be the very first runaway Synth. Caught in the middle between the Nucleus and Far Harbor, they need the help of an outsider to tip the balance and (hopefully) regain peace. 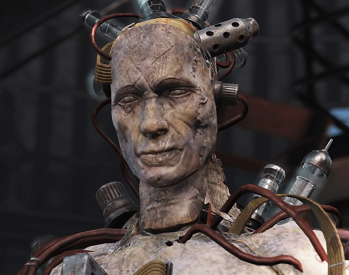 A mysterious, modified Synth that co-founded the refuge at Acadia with Faraday and Chase. 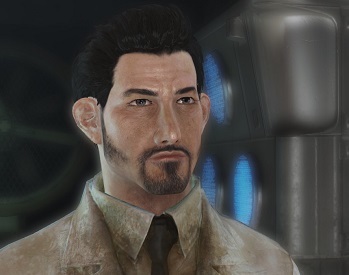 An escaped Gen-3 Synth who came to the Island and eventually became one of the co-founders of Acadia, along with DiMA and Chase. 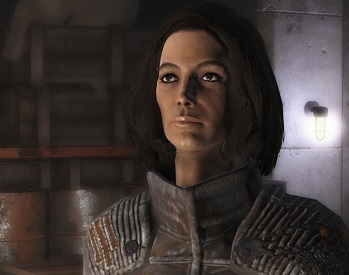 A renegade Institute Courser who came to the island and eventually became one of the co-founders of Acadia, along with DiMA and Faraday. 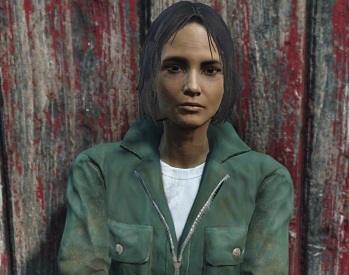 A girl who ran away from her home to Far Harbor. Kasumi believes she's a Synth who replaced the original Kasumi, and thus joined the locals at Acadia. 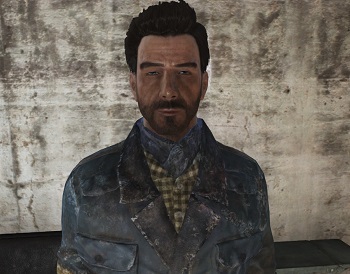 One of the Synths at Acadia, Cole is a merchant. He serves an important role depending on the choices the Sole Survivor makes. 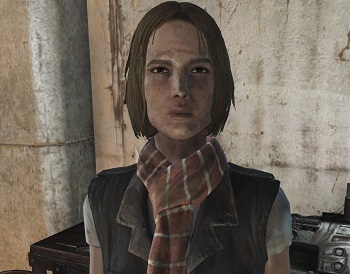 A friendly Synth who is very eager to see the outside world. 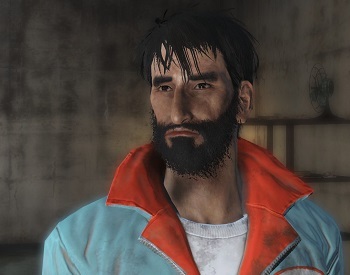 Acadia's resident trader, Cog is Jule's friend and believes Synths should forget about their past lives before Acadia, as it no longer matters. 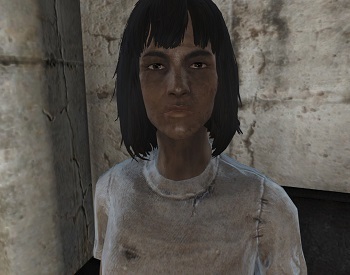 A newer resident to Acadia, Jule is the result of a botched mind wiping operation. 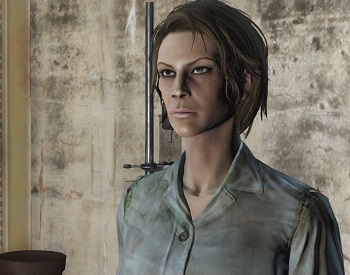 A Synth scientist who also works as Acadia's medic. She seems to be particularly fond of a certain type of flower that grows on The Island, which is also named aster.

A nuclear submarine base built into the mountain that was given to the Children of Atom by DiMA. Though they were once merely harmless eccentrics, and are friendly to newcomers like the Sole Survivor, they've been stirred up by their new leader, High Confessor Tektus. 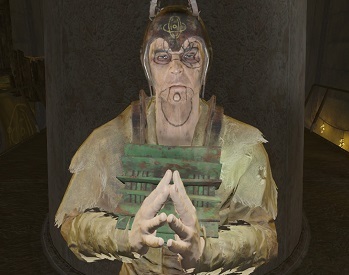 The leader of the Children of Atom on The Island.

High Confessor Martin
Tektus' predecessor as High Confessor, he was the leader of this sect of the Children of Atom when they came to Far Harbor, but he vanished prior to the events of the game. 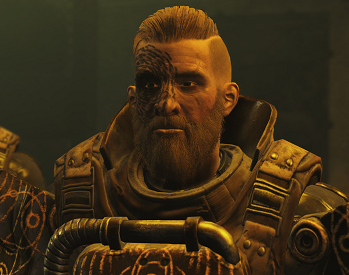 The leader of the Zealots and Tektus' chief enforcer. Further dialogue with him reveals he's a former soldier of the Enclave. Yes, that Enclave. 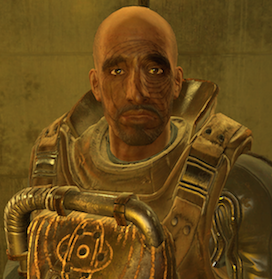 A Child of Atom Zealot who has grown worried over a fellow member that has started fasting and exposing himself to radiation in hopes of receiving a vision from Atom himself. Hoping to save his friend he tasks the Sole Survivor with convincing Devin to stop before he ends up killing himself. 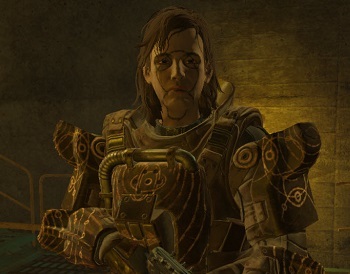 A young woman who was caught in a powerful radstorm that nearly killed her, but was rescued and nursed back to health by Grand Zealot Richter. Now she serves Atom as a guardian of the Nucleus who is tasked with keeping the order and dealing with heretics. 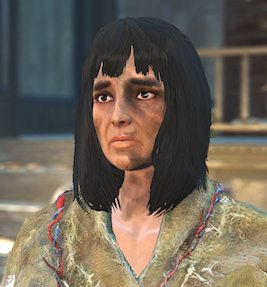 A much-beloved member of the Children Of Atom who was cast out into the island after committing blasphemy against the church when she found an old textbook that revealed the true nature of the atom to her. 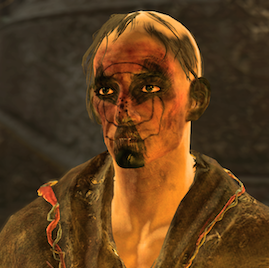 A close friend of Zealot Ware who is undergoing a dangerous fast while exposing himself to high amounts of radiation to prove his devotion to Atom and the church. Unfortunately, like Ware he is one of the few Children Of Atom members not born with a special immunity to Radiation and as a result has suffered some extremely adverse effects on his health and well being, leaving it up to the Sole Survivor to snap him out of his fevered loyalty to his god so he can begin the road to recovery.

A gun merchant who has a shop set up on the upper floors of the Nucleus.

An elderly woman who used to reside in Far Harbor until she was cast out. She seems to have suffered some great injury or affliction in the past that has left her in a weakened state, though she still manages to perform her duties as Atom's doctor.

Captain Arnold Wabash
A pre-war US Navy captain and skipper of the ballistic missile submarine USS Democracy who met his end before the bombs fell. He was the one who initially installed the Virtual Reality system that DiMa encoded his memories into. He is also responsible for the irradiated state of the Nucleus. When the order was given to deploy his submarine and launch at China, he refused and intentionally sabotaged the reactor so the sub would be taken out of service for a long time. Wabash then attempted to desert with his mistress Fran.himself.

Though the Vault Experiment for 118 was originally to see what happened if a bunch of rich people were forced to co-habitate with a bunch of poors next door, funding problems and the imminent nuclear war changed things (the "poor" side of the vault was never finished). One of the residents, Bert Riggs, was a lead designer on the team that developed Robobrains and convinced his fellows Vault Dwellers to stick their brains in robot bodies (minus the usual brain-washing that Robobrains got) so they could have indefinitely long lifespans and wait out the war. Nobody ever got the all-clear signal, so the end result is a vault of eccentric robots acting like upper-crust billionaires. Then, one day, one of them is mysteriously murdered and the Sole Survivor is summoned as a detective to help them out.

A Mr. Handy who first greets you upon finding Vault 118 and asks for your help in solving a murder mystery that is plaguing its residents.

A Ms Nanny who runs the store in Vault 118. If the player takes too long to discover the Vault on their own she will appear in Far Harbor and escort them there herself.

A rich entrepreneur who owned the Cliff's Edge Hotel before the bombs fell and funded Vault 118. He is found as a murder victim at the beginning of the "Brain Dead" quest.

A famous actress from before the Great War who seemed to have a bit of a rivalry with Vera Keyes due to the latter getting a part in the movie "Love Sets Sail!" instead of her.

A famous Hollywood actor who starred in the pre-war film "The Fightin' Furies: Last Stand At Fort McGee" which played at the Eden Meadows Cinemas.

A painter who most famous and popular pieces are a series of cat paintings that he sold under an alias. Despite making enough money to retire for life and buy a spot in Vault 118, he continues to paint in the hopes of leaving behind something when he dies.

A lead developer on the Robobrain project of General Atomics International. It was his idea to put the brains of the residents into the robot shells to serve as a form of immortality for the members of Vault 118.

The wife of Bert Riggs who was a wealthy financial adviser before the Great War.

Other Residents of The Island 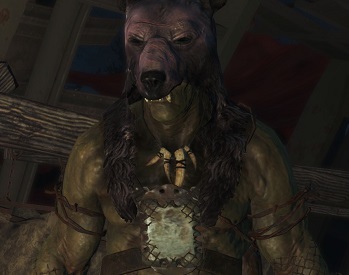 Another friendly Super Mutant in the world of Fallout, Erickson abandoned his brothers after they tried to kill him for his newfound sense of morality and intelligence. He lives on his own, is a good friend of Longfellow, and raises a few dogs to sell.

Grun
The leader of the Super Mutants on the island, stationed in the Vim factory. When Erickson left the group, he did so by locking Grun in the loading bay, assured the others would be too distracted trying to free their leader to stop him.
Uncle Ken
Mitch's uncle and the last living member of the staff of the National Park Visitor Center. After lending him a hand against some Trappers, the player can choose to let him remain here or convince him to move to Far Harbor with his nephew.