This is a folder for the major factions and characters within the Fallout 4 Commonwealth.

In General
The Commonwealth Minutemen 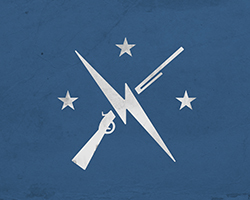 An organization of volunteer soldiers who used to serve as the protectors of the Commonwealth but have since run into a bit of bad luck. The Sole Survivor and Preston Garvey can restore them to their former prominence.

The East Coast Brotherhood of Steel

In General
The Harbormen of Far Harbor

The original residents of Mount Desert Island. The Harbormen mainly reside in the north of the Island in the titular community. While they used to be spread all over the Island, the Fog has driven them back to the Northern docks, with Fog Condensers provided by Acadia keeping the Fog at bay. Unfortunately, a recent change of leadership in the Children of Atom has sparked tensions between both sides, as the Children see the Fog as a blessing, while the residents of Far Harbor only see it as something that's killed countless members of their community and should be eliminated.

The Synths of Acadia

A community of runaway Synths located in the observatory atop the island founded by DiMA. In the past, they gave Far Harbor the Fog Condensers as a sign of trust. Unfortunately, the Children of Atom see the condensers as an affront to Atom, and Acadia's providing of them to Far Harbor threatens the community's neutrality as tension mount between the Children and the Harbormen.

Advertisement:
The Church of the Children of Atom

Returning from Fallout 3, the Church of the Children of Atom have changed quite a bit in the intervening decade. Originally, they were only a cult of loony but harmless folks who worshiped an atom bomb in Megaton. Since then, they've become considerably more militant, swelling in numbers and going off on a vicious crusade across New England to "spread Atom's word". The Children are split into three main groups - the Crater of Atom faction (found in the Glowing Sea, they are peaceful if a bit rude to the Sole Survivor), the main Commonwealth faction (who are religious extremists that attack virtually anyone outside of their cult on sight), and the Mount Desert Island faction (one of the main factions in the Far Harbor DLC).

The events of Far Harbor revolve around a brewing conflict between the Children of Atom, Acadia and Far Harbor. Their fanaticism found the Fog, which they believe makes the Island Atom's land, and wish to spread it everywhere. This is obviously bad news to those who aren't immune to the Fog's radiation and the murderous creatures it spawns, sparking hostility with Far Harbor. The Children of Atom also see the Fog Condensers as an affront to Atom, souring their previously positive relations with Acadia (whose leader, DiMA, had previously helped them find a safe place to dwell on the Island after they were kicked out of Far Harbor). A recent change in leadership has led the Children to become even more militant, which combined with the death of a missionary at the hands of Allen Lee of Far Harbor, has raised tensions to an all time high.

An army of three different Raider gangs who had pushed out any and all Trader resistance out of Nuka-World and turned it into their own personal playground, under the leadership of Overboss Colter. But seeing as you just killed him, now you're their Overboss.

An extremely vicious gang of Raiders holed up inside Fizztop Mountain. They are led by Nisha, and their symbol is five tally marks composed of knives. Most of them are women, and they're all primarily interested in violence and bloodshed.

A gang of "colorful" Raiders present found in the Bradberton Ampitheater. They are led by Mason, and their symbol is a snarling dog's head. They're easily the most "tribal" out of the Nuka-World Raiders, and base their hierarchy around the animal kingdom while using attack animals in combat.

A gang of pseudo-aristocratic Raiders present found in Nuka-Town USA's Parlor. They are led by Margaret "Mags" Black, her brother William, and their friend Lizzie Wyath. Their symbol is a bleeding heart inside of a crosshair. Primarily, they're concerned with making money over displays of strength or brutality, and their aesthetic is a lot of fancy candles, lights and vases around territory they own.

"Raiders" is a catch-all term for the countless gangs of murderous cutthroats scattered across the Wasteland. There are a multitude of Commonwealth Raider gangs and tribes, each centered around various "Raider Lords."

A ruthless army of mercenaries found operating in the Commonwealth, who have been warring with the Minutemen (and pretty much everyone else) for a long time now. Despite their claims about being skilled mercenaries, they're little more than slightly more-organized Raiders with very militaristic pretensions, even attacking many of the Sole Survivor's settlements after they're organized. They also have a "no-prisoners" mindset, will do any job for the right price, and are actively attempting to conquer the entire Commonwealth on behalf of some mysterious other party. Possible companion MacCready used to be a member of The Gunners.

The Triggermen are a group of Mafia themed gangs who mostly occupy the urban areas of Boston. The Survivor encounters them in Vault 114 when rescuing Detective Nick Valentine, whom they have kidnapped. They are lead by mob bosses such as Skinny Malone and Marowski.

A small but deadly gang of ex-Gunners who are based around Saugus Ironworks. They are obsessed with metal and fire.

The "local flavor" of Super Mutants found in the Commonwealth, the Island, and Nuka-World. No one knows for sure where they come from, but they're seen as bad news and regularly attack virtually everything in sight. They are organized into a series of marauding warbands found across the Commonwealth and a separate detachment on the Island, intent on expanding forth from their fortifications and seizing the entire region for their own.

A group of robots who have commandeered the USS Constitution and are looking to set sail with it.

The Pillars of the Community

A religious cult based in the Charles View Amphitheater.

A band of ghouls inhabiting a shipwrecked vessel of foreign origin who are heavily implied to be foreign sailors stranded by the bombs - specifically Norwegian from their speech.

A Vault that, unlike many others, is not only still operational, but is also inhabited by the descendants of those lucky souls who escaped the fires of the Great War. But this supposed control Vault, where Curie can also be found, is not without its secrets.

Located roughly between Medford/Malden and Lexington, Covenant's a remarkably pristine and well-guarded settlement that seems... off on a closer look.

A small greaser gang located near Quincy who specialize in fancy paint jobs for Power Armor.

The Rust Devils
Introduced in the Automatron DLC, they're a deadly gang of Raiders with a penchant for robots. Coming from outside the Commonwealth, they serve as the antagonists for the second third of the DLC, having captured Jezebel, one of the Mechanist's Robobrains. Their main headquarters is the Fort Hagen Satellite Array and hangar, both of which they have converted into a massive fortress. However, the Sole Survivor and Ada clear them out in their quest to destroy the Mechanist. They're then reduced to minor antagonists found skirmishing with the other factions across the Commonwealth (mostly spawning close to places where robots are scripted to appear, like some of the Pre-War military checkpoints).
The Trappers

Far Harbor's version of Raiders. They have a coastal/fishing theme, and are largely cannibals. They're said to be residents of the Island rendered insane by the Fog.

Built below the Cliff's Edge Hotel, Vault 118 was intended to encompass two different wings under one Overseer - one to house members of the highest class of society (Hollywood actors, business tycoons, scientists and artists), and the other to house the lower classes. Because of budget cuts, however, the majority of the Vault was made up of robotic staff and only the wealthier half of the Vault was ever finished. Thinking of ways to cheat death, the wealthy inhabitants had their brains placed into Robobrain bodies and have spent their time doodling around for the intervening centuries. The Sole Survivor comes to visit them in order to solve a murder mystery based here.

A religious sect that first discovered in Fallout 2, and are now encountered in Nuka-World. They are searching the park for a decommissioned UFO ride they believe is a spaceship that can take them to their promised land.