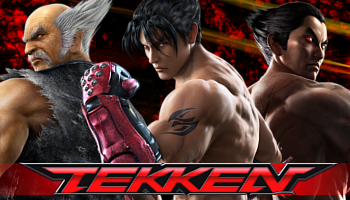 The Big, Screwed-Up Family. note From left: Heihachi Mishima, Jin Kazama, and Kazuya Mishima.
Welcome to the King of Iron Fist Tournament.
Get ready for the next battle!
Advertisement:

Tekken (鉄拳, lit. "Iron Fist") is one of Bandai Namco Entertainment's most popular franchises and the most successful 3D fighting game series of all time, such that it is a Trope Codifier for that subgenre.

Tekken is a very demanding game to play, as it makes judicious use of extremely precise hitboxes for all of its characters — if someone punches for example, you can just duck under it entirely. Punches and kicks are uniquely mapped to the four face buttons, with each one corresponding to a limb. If you press a button that uses the right arms, then the character will almost certainly strike with that arm, for example. Characters also have massive movelists — for example, main character Kazuya has over 60 moves by Tekken 7, and that's not even getting into characters like Yoshimitsu or Hwoarang, who have stances with their own dedicated movelists. This complexity has earned it many fans around the globe and extreme success in arcades (and later in console ports), and the series has a reputation for being one of the most challenging, technical yet highly rewarding fighting games a person can play.

While fighting games are not traditionally known for rich storylines, Tekken holds the Guinness World Record for the longest-running sequential video game storyline, period.note That is, without any significant sequel gaps or continuity reboots. It begins with the Mishima Zaibatsu, a conglomerate of the Mishima family, run by Heihachi Mishima, sponsoring a tournament called King of Iron Fist. The winner is promised a huge prize... if they can beat Heihachi, that is. As it turns out, the tournament winner is in fact his disgruntled son Kazuya Mishima. Having been thrown into a ravine when he was only five years old by Heihachi himself, Kazuya made a Deal with the Devil, survived, and trained himself so he could exact revenge. Heihachi, too late to realize Kazuya's devilish power, was soundly beaten and was thrown by Kazuya into the same ravine where he was thrown by Heihachi.

Eventually, Heihachi comes back and reclaims his place after Kazuya, seemingly the hero of the first story, turns out to be even worse of a person than he is, so after his victory he kills Kazuya by throwing him into a volcano. The third game takes place after a Time Skip and deals with Kazuya's son, Jin Kazama. The fourth deals with the return of Kazuya, and later games continue to cover the struggle inside the Mishima family, with the Devil Gene complicating matters, and even involving an Eldritch Abomination. The seventh game, featuring the appearance of Heihachi's wife and Kazuya's mother, Kazumi Mishima in flashback sequences, resolves the blood feud between the father and son, but does not end the Tekken series as a whole, with the story's ending setting up a new narrative.

Nintendo also got a Spiritual Successor of sorts to the series in the form of Pokkén Tournament, a Spin-Off of the Pokémon franchise that plays similarly to a Tekken game with several twists, since Tekken project director Katsuhiro Harada himself is involved in its development.

And the best part? It's cannon!

And the best part? It's cannon!