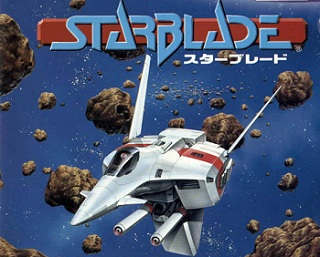 Starbladenote sometimes stylized as StarBlade (not to be confused with the Atari St/Amiga adventure game) is an early polygonal Rail Shooter developed and published by Namco in 1991. It is part of a loose series along Galaxian3, Attack of the Zolgear and the space flight game Star Ixiom, and part of the "United Galaxy Space Force" saga, which also includes such diverse games as Galaga, Burning Force, and even Dig Dug.

A mechanized alien task force spearheaded by the Death Star-like structure Red Eye has entered the Federation's space and is fast-approaching the Federation's home planet. In response, the Federation scramble several fighters unit to attack Red Eye and destroy its power reactor, Octopus. The player is a gunner aboard one such fighter, the FX-01 "GeoSword".

The game is a fairly simple Rail Shooter. The player controls a crosshair overlaid on the screen and shoots at enemies. There are no alternate weapons, GeoSword's movement is completely automated, and survival is limited to shooting enemies before they shoot you.

Advertisement:
Ports
Contemporary ports were released for the Sega CD, the 3DO and the PlayStation (as Starblade α). The Sega CD version used coloured wireframe models due to the add-on's limitations, while the PlayStation and 3DO versions more accurately replicated the original arcade graphics and included a mode with textured graphics. However, the background and larger objects were made part of a single continuous FMV instead of being rendered in real-time.

The game was later featured as the loading screen minigame of Tekken 5's home port, and a full port of it can be unlocked. It was also released on the Virtual Console, though only in Japan.

A sequel titled Starblade: Operation Blue Planet was in development and made it to the location test phase in 2001, before being scrapped. The game sported a stylized, Rez-like take of the original's untextured graphic and made us of the ORBS system, a cabinet set-up which had the player enclosed into a sphere.

as part of the USFG website and a scaled-down version of the ORBS technology was used for 2006's Mobile Suit Gundam: Bonds of the Battlefield, Mach Storm, and Star Wars: Battle Pod, the latter two which was released in 2014.

This game contains the following tropes.