The various groups who reside in Throne. 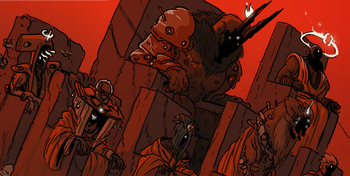 When the demiurges slaughtered each other in their civil war over creation, seven of them emerged victorious and over the ensuing eons have gone entirely mad.

Tropes applying to all of the Seven:

Queen Nadia Om, the Blood Flower, Imperiatrix of the Gates of Fire, Bearer of the Word Glory, Goddess of the Seven Part World (Mother Om/Mottom) 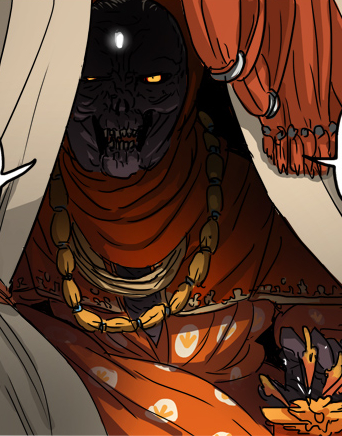 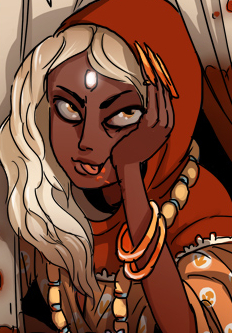 Click here to see Mottom as a young woman. 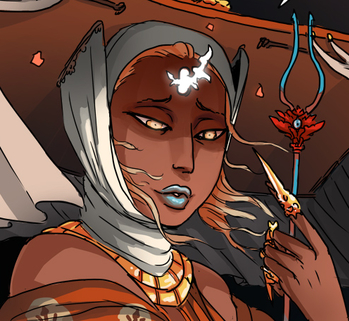 "Wrong question, my dear. "Why" is a question of the weak. The proper question is "why not"."

One of the Seven, she appears in the void with the appearance of a withered crone in immense, decadent silks, constantly eating, though wasting far more; but she displays a much more pleasant face to her followers. Her halo is gold, and unlike the others it stands upright behind her head, as if part of her costume. She bears the word Glory.

Her holdings include the Earth Allison hails from, though thankfully for that world, she had yet to claim it when the story opens.

Solomon David, God-Emperor of the Celestial Empire and Grand Master of Ki Rata, Bearer of the Word Diamond and God of the Seven Part World 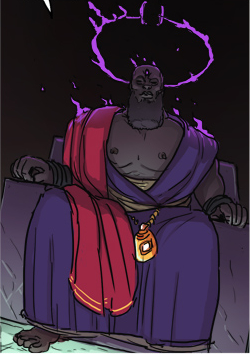 "I am my own justification. So say I. This is the law of kings. Either make it your own — or know your place."

One of the Seven, with the appearance of a massive bald black man with a square beard. His halo is huge and purple; the light it casts down onto him gives his skin a purplish cast. He is the most self-righteous of the Seven, still believing that everything he does is right.

According to Word of God

: "Solomon David is regarded as just, even-handed, and incredibly brutal by most of his subjects. As god-emperor of the powerful Celestial Empire, his dictatorship has uplifted countless societies and crushed countless more into dust. Most people live their daily lives with a high degree of safety, industry, and prosperity under his rule, if not freedom."

Gog-Agog, Queen of Worms: The Great Devourer, Scourge of Worlds, Bearer of the Word Beast and God of the Seven-Part World 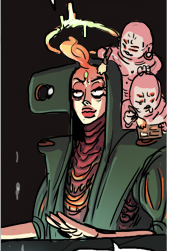 One of the Seven, and far more obviously insane than the others. Her halo constantly drips some sort of green ooze, reflecting her personality wildly varying. According to word of god

, she rules and controls entertainment in Throne and is considered a major celebrity there.

Jadis, The Lady of Infinite Repose, Bearer of the Shape of the Universe, the Queen of Shapes 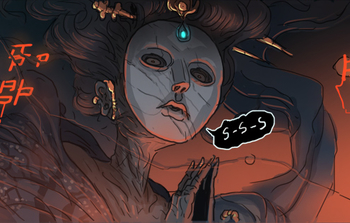 Click here to see Jadis as a young woman.

One of the Seven, she exists inside a block of glass, and — while once beautiful — is now a decaying corpse. She never moves save to whisper prophecies, which are interpreted by her attendants.

Mammon, the Grand Dragon, Scaled God of the Deep, Master of the Infinite Vault, Lord of Yre-Ynamon, Bearer of the Word Tower, God of the Seven-Part World 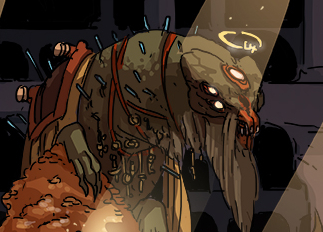 The sole non-humanoid Demiurge amongst the Seven. Bearer of the word Tower and God of the Seven-Part World, his bank spanning 111,111 universes has wealth which surpasses that of even gods.

Incubus, Lord of the Golden Army, Sword King of the Middle Army, Bearer of the Word Flame and God of the Seven Part World 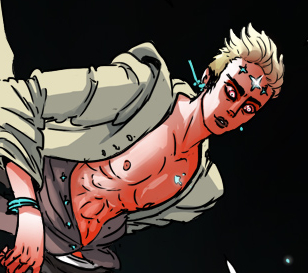 Click here to see Incubus in the waking world. 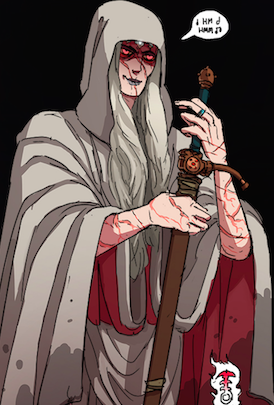 "That's the thing, kid. We're princes of the world. We take what we will. We break. We conquer. Imagine, if you will, actually trying to rule. No, here's the moral of the story. He hasn't won yet."

One of the Seven. Superficially the nicest and most approachable of the Demiurges, though only superficially. He is the bearer of the word Flame, and his worlds are "brutal anarchy, with what little of value there picked apart by the bloody warlords he hand raised from the remnants of the most powerful army in the universe." 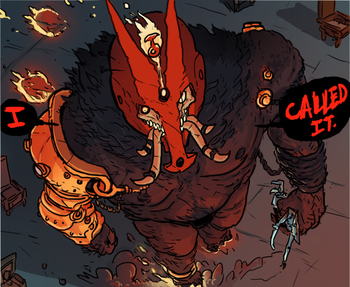 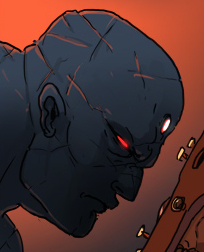 According to the notes on his character sketch

"Pankrator Jagganoth is his own fortress of blood and horn. He is the greatest warrior creation has ever known, a brutal tyrant-king, unconquerable and unassailable, the sign of his passing the crack of bones being turned to jelly and blood boiled to vapor. Men do not know true terror until they have faced the ultimate monstrosity."

) states that Jagganoth is as strong as the rest of the Seven combined. 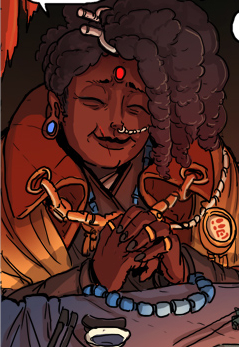 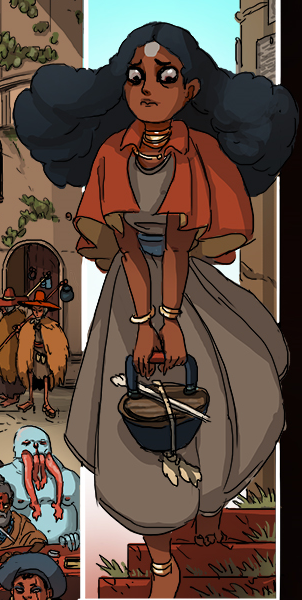 "What do you think about death?"

A mysterious Mendicant Knight who Allison first spots eating some noodles. She refers to herself as "Auntie Maya", but also carried the surname of Mantra which means "Murder the Gods and Topple Their Thrones". Apprentice of Meti.

According to Word of God on her character sketch

, she is an antagonist and "a habitually drunk, overweight, Mendicant (begging) Knight. An insanely powerful swordswoman with a burning hunger for revenge." They also note that she wields the Maybe Sword.

and a legendary general, though she is now a fat, drunk and foulmouthed recluse. 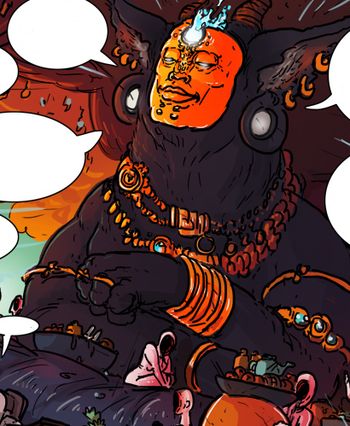 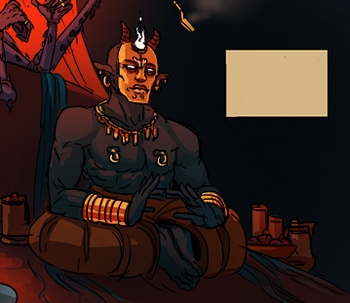 "Silly mouse found a cat and thought she was safe. She forgot about dogs... and worse."

A gigantic, sphinx-like Gold Devil, ruler of Hell 71 and master of the Gilded Cage Guild. 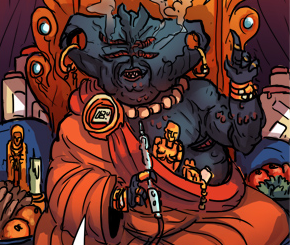 "Anyway, will you take bribes?"

A goblin, head of the Golden Pearl Pleasure Guild, and employer of 23 Liminal Blossom. 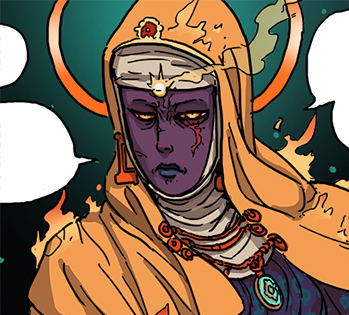 "Tis' only a little creature. A wretch who hath mistaken strength for power."

The head of the Cult of the Grand Dragon, and Mammon's representative in all business and political deals. 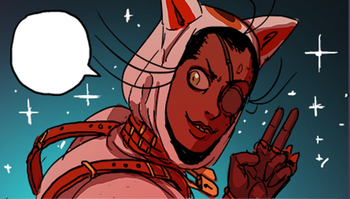 "I dunno what kinda door ya needed picked - but ya hired the best! Lucky Felicia!"

An expert lockpicker who joins Oscar's heist crew for a share in profits. She's there to open the Door.

A group of 108 mercenaries and sellswords who are chasing after Allison and company to get a bounty from Praman Nand. 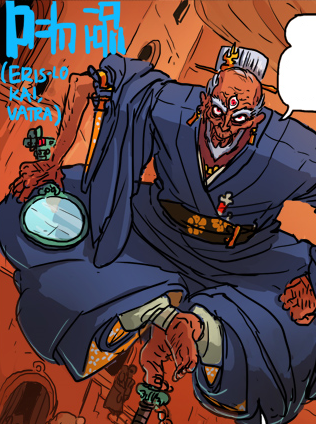 "The Key is mine. Any fool who claims otherwise, speak quickly- that I may deprive you of your head."

One of the Pursuers, an elderly swordsman with a third eye in his forehead.

Behold the most memorable minor character in the entire comic.

A Geas Knight working for the Haberdashers' Guild and Coalition of Wax Drippers who joins the Pursuers. 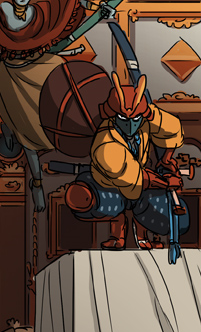 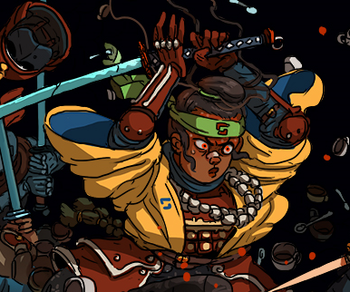 One of the Pursuers, a would-be Belligerent Knight. 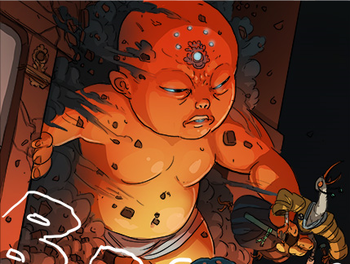 Another one of the Pursuers, notable for looking like a giant golden baby.

Kierinsaval of the Golden Feather 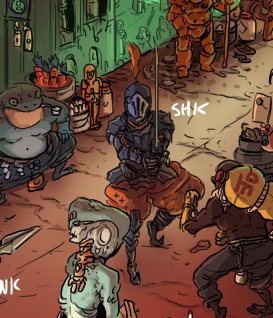 A Peregrine Knight who is a member of the Pursuers.

Krismayana of the Hearth Stokers' Guild 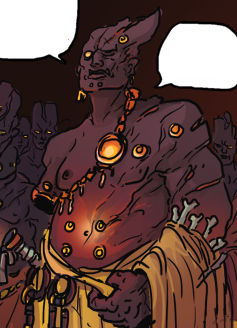 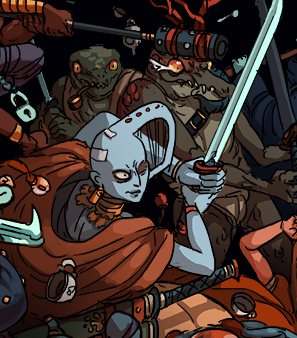 Another Pursuer with an odd-looking head. 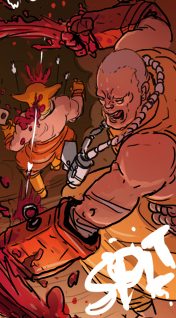 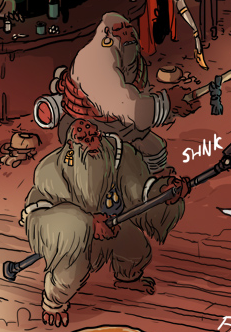 A pair of ape-like Servant beings, two of the Pursuers.

A spear-wielding fish-person, one of the Pursuers. 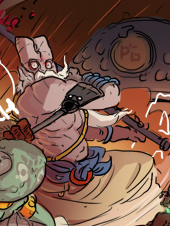 A Pursuer with a long white beard and a longstaff, who seems to be formed from stone. 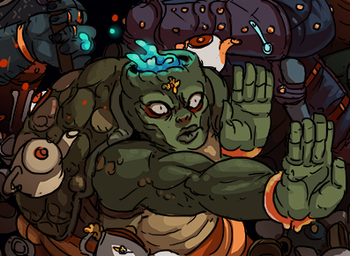 A kappa-like Pursuer, who fights with their bare hands.