Magic Feather
aka: The Magic Was Inside You All Along 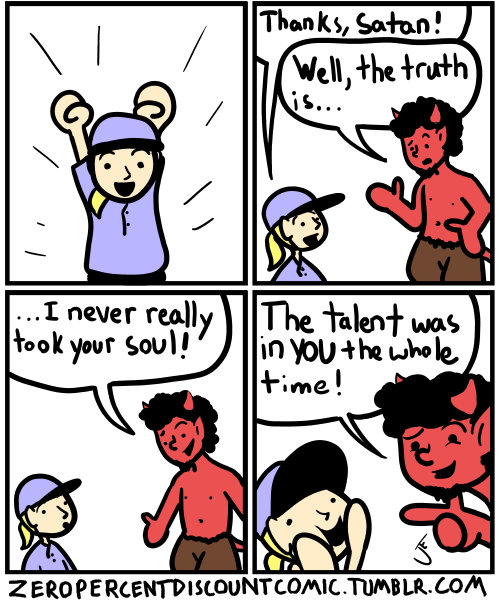 Satan, you Magnificent Bastard!
Mr. Ping: The secret ingredient is... nothing! You heard me. Nothing! There is no secret ingredient.
Po: Wait, wait... it's just plain old noodle soup? You don't add some kind of special sauce or something?
Mr. Ping: Don't have to. To make something special you just have to believe it's special.
— Kung Fu Panda

Alice is given a supposed magic item that will give her special/exceptional abilities. She does amazingly well, but then she loses the item. She goes back to her mentors, only to learn that it was just a useless placebo, and "the magic was inside you all along!" Sometimes the audience knows, or at least suspects, that Alice's abilities were her own, but other times The Reveal is just as much a surprise to them as to her.

In comic books, a retooled Super Hero Origin sometimes shifts a character's gimmicky power from artifact-dependent to innate, with the revelation that the famous prop or incantation was simply a focus.

Supertrope to Placebotinum Effect, and of course this is the Placebo Effect. It's also a neat way to subvert the Amulet of Concentrated Awesome. May or may not be a character's Charm Point. Somewhat of a Dead Horse Trope in newer works (a common subversion is that the character throws away her 'feather,' only to discover that she needed it after all).

The key to this trope is in The Reveal, so examples where the feather is never shown to be bogus do not count. If the character (or the audience) believes the feather does nothing, but this is never put to the test, see Maybe Magic, Maybe Mundane.

Sister trope of All That Glitters, Motivational Lie, and The Presents Were Never from Santa. Compare It's the Journey That Counts. Not to be confused with Mario's flying cape item.

Alternative Title(s): The Magic Was Inside You All Along