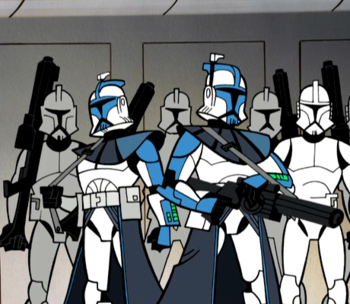 "ARC troopers, you were selected for this task because you are the best; the elite. You all know what to do."
"These aren't outdated SWAT-bots either. They are the shadow-bots Delta and Gamma — my personal vanguard."
— Dr. Robotnik, Sonic the Hedgehog Issue #74
Advertisement:

When the enemies are too easily taken down by the heroes and there is a need to increase the challenge, the easiest way to is to upgrade the Mooks into Elite Mooks. They may come with better weapons, more training, additional skills, or various powers the normal Mooks do not possess. The look of the Elite Mooks may be noted with various appearance changes from a simple Palette Swap, adding Spikes of Villainy, a fancier uniform and other cosmetic alterations that make them stand out from the crowd of regular Mooks. The Big Bad's personal security detail may be a group of Elite Mooks.

Any variety of Mooks can be upgraded to become an Elite Mook, which can yield a Boss in Mook Clothing or Super Powered Mooks. Mooks can be transformed into Cyborgs, Zombies or Elite Zombies if they were already zombies, made into Super Soldiers, or upgraded in other various ways.

In video games, Elite Mooks are very likely to be Demonic Spiders.

Not to be confused with the generally solitary Giant Mook, the Heavily Armored Mook or the Surprisingly Elite Cannon Fodder. Compare Elite Army, which is what the Elite Mooks may make up. Also compare Mook Commander, which has a main purpose of buffing other mooks but usually fulfills this role as well. Compare the Praetorian Guard as well, which are variants that personally protect the king or other head of government, although those are not necessarily evil. Contrast the King Mook, which is a boss version of a typical Mook, and the Mook Lieutenant, which is a higher ranking mook, who doesn't need to be an Elite Mook to become one.