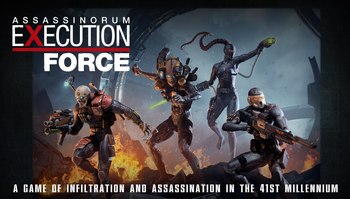 Assassinorum: Execution Force is a limited-edition cooperative board game released by Games Workshop in 2015, set in that company's popular Warhammer 40,000 universe.

The game revolves around a quartet of Imperial Assassins tasked with killing Lord Severin Drask, a Chaos Space Marine Sorcerer of the Crimson Slaughter, before he completes a dark ritual to tear open a massive Warp rift in the heart of the Segmentum Solar. Gameplay consists of moving the Assassins around a board representing a desecrated Astropathic sanctum, avoiding or eliminating Drask's minions — fanatical cultists and powerful Chaos Space Marines, controlled by the game itself — and searching randomly-generated rooms for both the sanctum's teleportarium and its teleportation control room. Once the Assassins have located both, they must teleport to the otherworldly Temple of Shades for the final confrontation with Lord Drask. Each turn, the players must draw at least one card from the Event Deck, which introduces complications such as patrolling enemies, alarms, and harmful psychic phenomena (along with occasional help in the form of the guards being crazy). The more enemies alerted to the Assassins' presence there are on the board, the more Event cards are drawn each turn; this encourages the Assassins to sneak past whatever minions they can, and dispatch any witnesses with ruthless efficiency.

Two pieces of related fiction were released concurrently with the game. The first, also entitled Assassinorum: Execution Force, is a novelization of the game's events written by Joe Parrino. The second, Assassinorum: The Emperor's Judgement is an audio drama prequel to the game depicting Callidus Assassin Klara Rhasc's encounter with a crazed Eversor Assassin on the planet Tevrat.

As an added bonus, the miniatures used in the game for the Assassins, cultists, and Chaos Space Marines can also be used in games of regular 40K.

See also Space Hulk, another board game set in the Warhammer 40,000 universe.