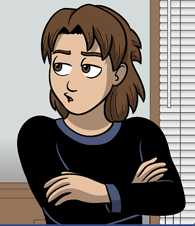 One of the first characters introduced in the comic, Elliot started off as an everyman and foil to Tedd's devious antics. Since then he developed into a well-meaning, if somewhat inhibited, sufferer of chronic hero syndrome who would do anything for his friends and loved ones. He attends Moperville North with Tedd, Susan, and Sarah. He's Tedd's best friend and Ellen's brother/father. 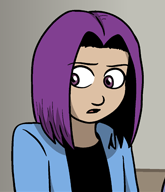 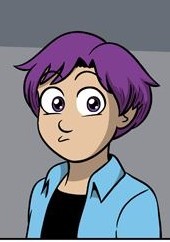 "Those gaming peripherals were for SCIENCE!"

One of the first characters introduced in the comic, Tedd is a self-avowed pervert and mad scientist. Despite being one of the least magically capable characters in the main cast, his extensive research on the subject makes him the resident expert on the finer workings of magic. Originally written as a sex maniac, his relationship with Grace has caused him to mellow out somewhat. He attends Moperville North with Elliot, Susan, and Sarah. 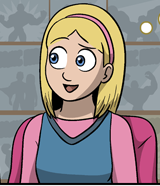 "I react to paranormal stuff in one of two ways: curiosity or sass. You hurt my eyes.

Sarah was the first female character in the comic and spent most of her time dealing with Elliot and Tedd's schemes to get her to appear in a bikini. Once the story started to incorporate more fantastic elements, she was made unique by being the most "normal" one of the bunch, having none of the gifts in magic or science the other main characters enjoy. She attends Moperville North with Susan, Tedd, and Elliot.

"You sound awfully annoyed for a guy with a furry fetish and a half-cat girlfriend."

Grace is a part-human, part-alien, part-squirrel shapeshifter who lives with Tedd and his father. Entire story arcs have been dedicated to her Dark and Troubled Past. Despite her history (and possibly being the most powerful character in the main cast), she maintains a positive, bubbly attitude and a strong belief in pacifism. She attends Moperville South with Ellen, Nanase, and Justin. 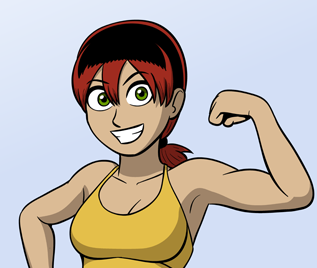 "It's hard to look bad-ass when you're using fairy powers."

Nanase is Tedd's cousin. Martial artist, magic user, all-around badass. Coming from an extremely strict and traditional household, she tends to over-think the potential problems until she makes a mountain out of a mole hill. Still, it's hard to find anyone less hard-working or dedicated than she is. She attends Moperville South with Ellen, Grace, and Justin. 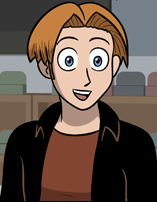 "Man, I suck at negotiating."

Justin is an amiable, level-headed comic shop clerk and Nanase's best friend. Since Elliot is also the one who introduced him to Nanase and the rest of the main cast by extension, Justin feels a huge debt of gratitude and an unrequited crush towards him. He also suffers from a seemingly irresistible compulsion to mess with long hair, though he is bothered by the stereotype. He attends Moperville South with Grace, Nanase, and Ellen. 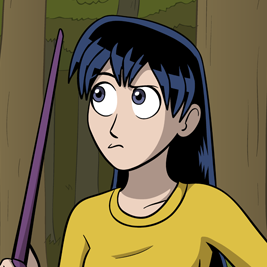 Isn't that what I said?"

The group's resident cynic, Susan (as she prefers to be called) was introduced in the comic as Sarah's man-hating best friend who would often give Elliot and Tedd grief. Interacting with the rest of the cast (and exploring her own history) has improved her opinion of the male gender to a strong degree, but she still maintains a high level of snark. She lives with her mother in a three-story house, works in a video store, and is the founder of Moperville North's Feminist Club.

"That crazed look could have meant any number of things!"

Elliot's more outgoing Opposite-Sex Clone created through magic. She originally thought she only had a few days to exist and decided to be a villain about it, but the revelation that she was here to stay caused her to lighten up. She inherited Elliot's magical aptitude, although most of her spells revolved around "spreading her curse" by turning her targets into sexy women. She attends Moperville South with Grace, Justin, and Nanase.

The Queen Bee of Moperville South. She is often seen with Lucy and Rhoda, the latter of whom she is quite protective. She and Susan share an uncanny resemblance in both appearance and personality, the full ramifications of the relationship between the two only becoming clear much later in the comic. 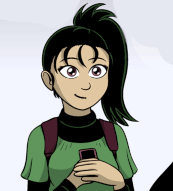 "I am not a bisexual asian soccer player gamer girl. I am a person who is a citizen of the United States with ancestors from Asia, who dances ballet, plays soccer and video games, whose sex is female and can find men and women attractive. I am Ashley, and I am what I am."

Ashley was introduced in the Identity story arc as a fan of Elliot's review show and Elliot himself. She has a fondness for magic, transformation in particular. She enjoys writing transformation based stories rooted in ironic punishments for those she believes deserves it. She has a dislike of labels, but if no other option is available she'd choose bisexual.