In General
Uryuoms, a Shapeshifting race of aliens. Some have been naturalised as Earthlings, though there is a Masquerade regarding their existence.

American-born Uryuom couple. They're not aliens, they are citizens!

Mr. Verres' Uryuom secretary. Claims not to be an alien and probably isn't in the strictly legal sense of the term.

Immortals are a class of supernatural beings who exist only on the spiritual plane and who are normally limited to advising and guiding mortals to act in the real world.

While Immortals live forever, they need to "die" to reset their memories and personality every 200 years or so to prevent their growing intelligence and power from butting up against increasing boredom and decreasing sanity. 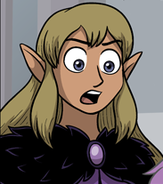 Pandora: You have asked many times what my name is. I have had many, but I will tell you the full name I have chosen for myself. PANDORA. CHAOS. RAVEN. Refer to me as one or as all, I will live up to the name.

An Immortal that can change her form at will. Virtually nothing is known about her except that she occasionally forces Magus to do her more dirty work. She is mostly an observer, but occasionally tries to influence events, particularly when she feels she has been slighted. She is actually the mother of Adrian Raven, the child of her and her mortal husband, and was trying to break The Masquerade so that her son can use his magic freely. Or was until she found out that magic did not approve of this.

The French Immortals, Helena and Demetrius

A pair of elf-like creatures who awakened Susan and Nanase's magical powers in Paris and now watch over Elliot.

An immortal involved in the events of "So A Date at the Mall". His real name is Voltaire, but fans called him "Cheshire" until his name was revealed.

In General
Aberrations are a dangerous type of monster that feeds on the life force of others. They are by choice, the worst of the worst, and most people who can't deal with them are advised to run and not fight.
Sirleck

A body-snatching aberration who used to inhabit the body of an old man. Has allied himself with Magus.

One of six aberrations hired by Sirleck to assassinate Adrian Raven, he distinguishes himself from the others due to his scarf.

One of six aberrations hired by Sirleck to assassinate Adrian Raven, he distinguishes himself from the others due to his appearance being that of a face on a large torso that devours.

One of six aberrations hired by Sirleck to assassinate Adrian Raven, he distinguishes himself from the others by looking like an Australian with a desire to bring kangaroos to the United States.

The Demonic Duck, Master of Distraction

Some sort of magical summon that takes the form of a red duck with horns and a cartoonish pointy demon tail. He's called forth whenever someone needs the attention taken off of them for a second, usually so they can make a quick getaway. It is possible to be distracted by the duck even if you're the one who summoned him.

A wizard tricked into transporting to environs of our universe

and largely unable to interact with it, that occasionally does "favors" for Chaos for the sake of ending his limbo. Has the ability to amplify the emotions of others. Like Chaos, very little is known about him, but what is known is that he wishes to return to life, and believes that Ellen is the key to making this possible. He claims to be Ellen's "Father", which implies that he orchestrated her creation in the first place.

A female Human/Skunk seyunolu sorceress working for Lord Tedd. While doing private research for her little court intrigue (in Lord Tedd's best interests, as she sees it) in an Alternate Universe where the main cast lives, she accidentally met them and saved Grace using her magical shield

. She "fixed" (and later contacted) Ellen as an expert in magical artifacts in general and the Dewitchery Diamond in particular after carelessly running into it while enchanted, thus accidentally creating Kaoli.

A bizarre looking creature that is introduced in the "There Be Whales" story-line. Feeds on ambient magic.

During the story arc 'So A Date at the Mall', the background plot is Ellen and company investigating a mysterious cloaked figure seen flitting about Moperville accosting passersby and questioning them. Naturally, she turns up at the mall. Since investigating her nature is a mystery, she's a bit of a Walking Spoiler.

First appearing in the Sister 3 arc when Pandora visits him for knowledge on magic, while he seems to be an immortal at first, he explicitly identifies himself as Heka, the Egyptian deity of Magic and Medicine, and the guardian of an unnamed library, and outright distinguishes himself from "Immortals", calling them by their original name, "Fairies". He's also a fairly pleasant host for visitors who don't cross him.

The Will of Magic

The sentient force that controls magic, its motives and nature are unknown at the current time.

A talking wand created to train wizard agents. Though it initially did not work at all, various events caused it to not only start working but, unexpectedly, to become sentient. He was created by Arthur, and is now in the care of Ashley.