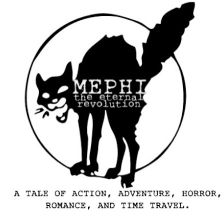 "People assume that time is a strict progression of cause to effect, but actually—from a non-linear, non-subjective viewpoint—it's more like a big ball of wibbly-wobbly...timey-wimey...stuff."
— The Doctor
"Had you told the me from a year ago that one day I’d be throwing open the doors to a bar filled with bikers and shouting, 'Who wants to go kill the CIA?' I’d have… probably looked at the ground to avoid eye contact and mumbled an unnecessary apology. But I’d have thought you were crazy."
— Lisa Wells
Advertisement:

Lisa Wells has just been fired from her job at the library. She's come home to find someone has set her up with a Gmail account and a blog, with several posts already backdated by someone named "Antevorta." "Antevorta" has written telling her to check the black chest in her attic. She doesn't have a chest in her attic...except now she does. An old chest that contains the story of "Elizabeth Wells," an ancestor of Lisa's that lived in the Wild West. Lisa reads the story, until she comes to the end where Elizabeth encounters the Archangel.

And then things take a turn for the weird when a psycho named Grendel attacks Lisa and she is saved by a mysterious woman named I-330.

is a blog that is a combination of The Slender Man Mythos, The Fear Mythos, and the Cthulhu Mythos. It also contains numerous other references, mainly to Doctor Who and We.