100% Completion
aka: One Hundred Percent Completion 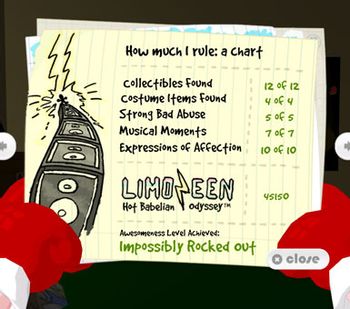 Strong Bad knows he's awesome. And has a chart to prove it.
"You know, some people feel like they haven't 'beaten' the game until they found every single available token. But I think that's just unnecessary padding."
— Ultimate Deadpool, Spider-Man: Shattered Dimensions
Advertisement:

A way of extending gameplay by setting completed tasks (such as collecting a certain number of items and doing optional sidequests) as a percentage, sometimes given explicitly. This feeds into the obsessive nature of the player.

Gamer opinion regarding this mechanic is roughly divided between those who feel that it should be easy for all players to obtain this and those who believe it must be difficult enough for only a few players to reach it during the game's lifetime. A common middle-ground is that anyone should be able to beat the final boss, but only the dedicated can achieve 100%. It is always Serious Business, however. This can get tedious, especially if the game has several Empty Room Psychs or Missing Secrets.

One usually doesn't need 100% to beat the game, but often will be rewarded with things like proper endings, extended story sequences, or "the making of" videos. Any powerful gameplay reward you might receive, such as infinite lives or an ultra powerful weapon, is inherently going to be Awesome, but Impractical, as you've already overcome all of the game's challenges (unless you can take it with you into New Game Plus). Other times, you receive nothing but the satisfaction of putting so much time into completing everything in the game. Or some spiffy new outfits. Or a very weird picture congratulating you. Or just some message telling you to get a life.

Occasionally, this is humorously extended way past 100%. For games that do this, see Over 100% Completion. See also 100% Heroism Rating. Often related to Gotta Catch Them All or Gotta Rescue Them All. For the items a game requires you to collect to achieve this, see Pickup Hierarchy.

Completionist gamers can come in several varieties, and have different ideas of what they consider 100%. As a result, some of the conditions they set can fall under Self-Imposed Challenge at times, with more hardcore players having more extreme conditions. This can include:

The trope became more popular with the rise of Achievements and Trophies during the The Seventh Generation of Console Video Games, allowing the player to not only get one hundred percent completion, but show everyone online that they did.

Have fun finding the Last Lousy Point. Or dealing with That One Achievement. Or, in more humiliating cases, Achievement Mockery and/or Completion Mockery.

Contrast Do Well, But Not Perfect and Minimalist Run. See also True Final Boss. Triple AAA games have required unlocking parts of the map via Crow's Nest Cartography to achieve 100%.