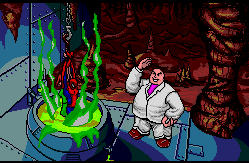 "What a lovely couple you make. A shame I didn't bring my camera. But I'll always remember you just like this."
"Power—Beyond that of a god! The walls of reality crumble before me! Yes, a universe to remake in my image! I will devour every dimension until all...is...MYSTERIO!"
—Quentin "Mysterio" Beck, after reassembling the Tablet of Order and Chaos, Spider-Man: Shattered Dimensions
Advertisement:

Given the source material, it comes as no surprise that video games based on Marvel Comics feature heinous villains.

Entries in each folder are by release date.