Macro Cosmos is a conglomerate organization that, among other things, provides almost all of the energy used in the Galar region. It manages the Gym Challenge and Pokémon League as well, with its Chairman, Rose, also being the Chairman of the Galar Pokémon League. They'll often assist trainers who are doing the challenge as well as provide them methods of using the Dynamax phenomenon.

WARNING: Major spoilers for Pokémon Sword and Shield follow. Read at your own risk.

open/close all folders
Tropes that apply to Macro Cosmos as a whole:

The chairman of the Galar Pokémon League and the president of Macro Cosmos, the corporation that supplies the near entirety of the region's electricity. He was the first person to endorse Leon as a Champion. He's also made the Galar Pokémon League famous by implementing Gym Battles featuring the Dynamax phenomenon. He is also Peony’s older brother and Peonia’s uncle. 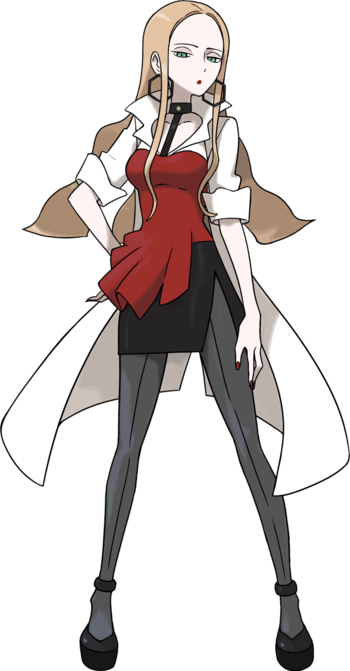 The secretary to Chairman Rose, known for her calm and collected personality. She also serves as the vice president of Rose's company and largely handles the company's day-to-day affairs. She's popular enough that some League Staff members have formed a fan club dedicated to her.