Anime / Kirby: Right Back at Ya!
aka: Kirby 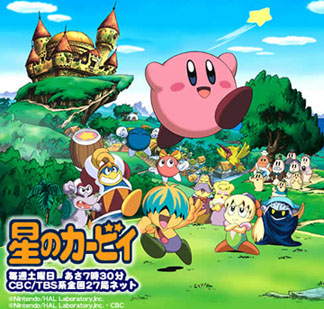 Kirby: Right Back at Ya! (Hoshi no Kaabii in Japanese, meaning Kirby of the Stars) is an anime adaptation of Nintendo's Kirby series. It was notably a joint production by Nintendo and the original series developer HAL Laboratory (Warpstar, Inc.), with direct involvement from game series creator Masahiro Sakurai. 4Kids Entertainment handled the dub.

In the first episode, Kirby crashes into Pop Star and lands in the country of Dream Land. King Dedede does not like the newcomer and does everything he can to eliminate Kirby. His methods come in the form of ordering monsters from the mysterious NightMare Enterprises (Holy Nightmare Corporation in Japanese) to fit whatever crazy schemes he comes up with. Along the way, Kirby befriends Tiff (Fumu in Japanese), the Cabinet Minister's daughter, and her brother, Tuff (Bun in Japanese) who help him to get settled in their village.

Kirby and his friends spend the episodes foiling Dedede's plans, battling the monsters he orders, undoing whatever damage he caused to Cappy Town (Pupu Village in Japanese), and the series follows their day-to-day antics whenever they're not doing any of the above. The series is episodic in nature, although it has several sequential episodes.

In 2011, Nintendo released the Kirby TV Channel in Europe, a free downloadable Wii channel allowing Wii owners to watch a constantly rotating set of episodes from the entire anime. In 2012, a 3D version of a special episode was released on the Nintendo 3DS. And in 2022, during the Kirby 30th Anniversary Music Festival, it was announced the series was getting an official HD Blu-Ray release in Japan. It will be released in Winter 2022.

Show Within a Show Dedede: Comin' at Ya! now has a Just for Fun page.