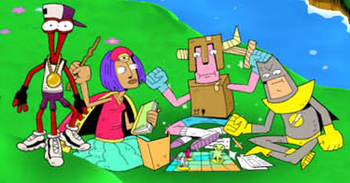 The role playing and strategy games that one sees on computers and video game consoles are one permutation of a much older legacy. The originals were played with a book of rules, pencils, paper, dice, models and imagination — a form of low-tech virtual reality. D6 dice are

Older Than Dirt, while D20s are apparently

Older Than Feudalism, though no one knows what they were used to play. These are still popular today, in many forms, the most widely known of which are tabletop RPGs and tabletop Wargames.

The default format for a tabletop RPG is for one player to be selected as the Game Master while the others each create Player Characters who will collectively act as the heroes of the game's plot. Individual sessions or "episodes" of the game are commonly called "adventures", and the ongoing game story itself is usually called a "campaign," a holdover from these games' own heritage from tabletop wargames.

These tabletop RPGs have historically been the subject of much controversy — usually due to misinformation or simply misunderstanding. Common myths included that roleplaying games lead to devil worship, that players (and not their fictional personae) carry out magical spells, and that players actually become their characters. Inexplicably, the stigma remains even after World of Warcraft and its ilk have made it seem almost normal for the guy at the water cooler to insist on telling you about his elf.

Another permutation of tabletop RPGs are live-action role-playing or LARP. LARPs are similar to tabletop RPGs in how they play, but instead of sitting around the table, players actually act out the story physically. Since these situations don't lend themselves very well to long stat sheets or rolling dice, most LARPs use greatly simplified game mechanics, ranging from the "rock-paper-scissors" system used under White Wolf's first-edition Mind's Eye Theatre rules to semi-contact boffer-weapon systems clearly influenced by the Society for Creative Anachronism and other recreationist groups. These games vary greatly in size, from intimate affairs similar to traditional RPGs, to massive events such as those run by the International Fantasy Gaming Society

Tabletop RPGs have their origins in the Older Than Radio Turn-Based Strategy tabletop Wargames, tracing all the way back to Chess (invented in ancient India) and Go (invented in ancient China). According to Dave Arneson (a co-creator of D&D), the modern concept of an RPG — players being represented in the game by actual characters with unlimited potential to act, as opposed to countries, pawns, or other abstract entities with well-constrained abilities — came about in the mid-1960s with David Wesley's "Braunstein"

game, a Napoleonic wars-era scenario where players took roles as city officials, soldiers, citizens, and students in the fictional German university town of Braunstein. Arneson adapted the concept to his own scenarios which eventually became known as the Blackmoor

campaign; this, in turn, eventually merged with Gary Gygax's Chainmail

wargame and Greyhawk campaign to become one of the first RPGs, Dungeons & Dragons.

Works licensed from Tabletop RPGs can be found below this list. For Fan Works, see FanWorks.Tabletop Games.