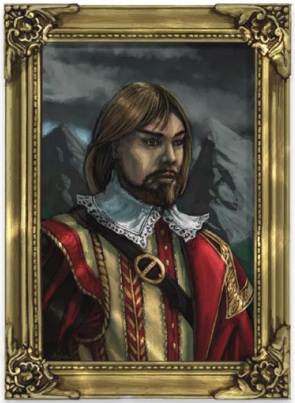 This painting is the first time you see Vanthus's face. The second time is when he locks you in a dungeon full of zombie pirates.
"The first savage tide has already touched the mortal world. Unleashed from the cruel heart of a shadow pearl, the tide swept over an ancient civilization, transforming the citizens into feral, cannibalistic fiends. The hateful architects of the savage tide watched, taking pride in the ruin they had wrought. Now, after a thousand years, the savage tide is about to return. Yet this time, the doom will not be limited to one hapless city. This time, all of civilization waits unknowing on the shore, blissfully ignorant of what the tide is about to bring in..."
Advertisement:

Warning! Unmarked spoilers follow! If you are playing in Savage Tide, you have been warned!

Savage Tide is an Adventure Path released for Dungeons & Dragons 3rd Edition during Paizo Publishing's run of Dungeon Magazine. The adventure begins when the adventurers are hired by a noblewoman of the port city of Sasserine, Lavinia Vanderboren, to track down her missing brother, Vanthus. Over the course of twelve adventures that follow, the Player Characters go from adventures in Sasserine to exploring the infamous Isle of Dread to braving the terrors of the Abyss itself in order to stop a plot by one of D&D's greatest villains to cast the entire world into savagery.

Savage Tide nominally takes place in the Greyhawk setting, though far to the south of the Free City of Greyhawk. It is the third in the Dungeon adventure path series, after Shackled City and Age Of Worms; the three adventure paths are in the same continuity, and Savage Tide assumes that the previous two campaigns have occurred.