You Didn't Ask
aka: You Never Asked 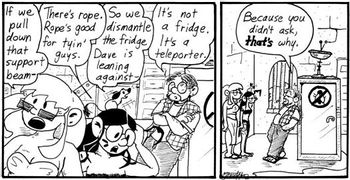 Dave's a jerk.note He should have pointed out the "no flies" warning sticker instead of saying that.
Sarge: You mean you could have turned the bomb off any time!? Why didn't you tell us? And don't say I didn't—
Gary: You didn't ask.
Sarge: (growls in irritation)
— Red vs. Blue
Advertisement:

A character on the show has been less than forthcoming about information that would have certainly helped the protagonist figure things out faster. Often, there's a good reason — a Big Secret or an Awful Truth, for example. In reality, the writers just needed a way to protract the story or build the suspense.

There are two ways this trope is generally employed:

A Trickster Mentor, vague prophet, or similar enigmatic figure may deliberately withhold information until asked, either because they can't reveal it otherwise or they need the other characters to keep consulting with them. On rare occasions, they do this because they know the information wouldn't be believed or make sense until a specific time.

This idea is often used when computers or Artificial Intelligence are involved. Because computers are extremely literal, it often happens that the computer or AI knows the answer to solve the problem, but since they weren't asked (or weren't asked correctly), they won't use this knowledge on their own.

A stock response to You Never Did That for Me. Compare Didn't See That Coming and Locked Out of the Loop. Often, They Didn't Ask about something that could have prevented the whole mess.

You Can Talk? may also figure in the conversation.

No one asked for a stinger so you're not getting one...wait a minute.

After Diesel has trouble with some trucks, Duck collects the other trucks. Duck explains Diesel never asked him because he was boasting about how revolutionary he was.

I Have a Boat

After Diesel has trouble with some trucks, Duck collects the other trucks. Duck explains Diesel never asked him because he was boasting about how revolutionary he was.

I Have a Boat