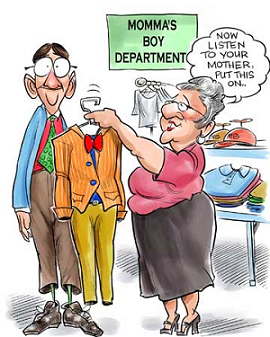 The smile says, "Yes, mommy." The eyes say, "HELP ME."
Cosmo: I am not a mama's boy!
Mama Cosma: Yes you are!
Cosmo: Yes, mama.
— The Fairly OddParents, "Apartnership!"
Advertisement:

If a guy is excessively devoted to his mother and he's not obviously a manly man, then he will be seen as a sensitive guy even if he doesn't act like one. His mother might try to completely dominate his life, to the point of telling him who to marry (and if he disobeys then she'll try to ruin his relationship or at least ruin her life too), turning him into a Momma's Boy: hopeless with women, timid, weak, and lacking the spirit to stand up to his mother. His father will be absent or just as browbeaten. On the other hand, if he does stand up to her then he's not a Momma's Boy, even though she's still My Beloved Smother.

Young examples are shown sympathetically; older ones are usually Acceptable Targets because no one can be a badass if he always obeys his mother's instructions (unless she's encouraging him to be a badass, which would make her more of an Action Mom). Note the Double Standard in this trope, as a girl with a controlling father is almost never Played for Laughs.

A young boy has a better chance of escaping mommy's patronage than an adult — who will, if anything, end up with a domineering wife instead. Sometimes an Oedipus Complex is involved. Rescue is unlikely: there aren't many Action Girls running around looking for poor oppressed boys. So there's the real danger that Momma's boy will grow old alone, until smother dies, when it's too late to change their ways and Set Right What Once Went Wrong.

To every Momma's Boy there is a Boy's Momma, of course.

Although the trope is usually played as inherently negative, it can also be portrayed in a more positive light, becoming essentially a gender-inversion of Daddy's Girl in which mother and son are simply very close and utterly adore each other, often to the exclusion of the father (if he's even around to begin with); and while the well-meaning mother might naturally welcome the idea of her son getting hooked, the usual doting and spoiling with which she treats her son might be a bit overwhelming for potential Love Interests... if she didn't accidentally scare them off with her overprotectiveness first. If the mother becomes infirm in her old age, expect the son to become the caretaker of the relationship. This form is still likely to be Played for Laughs, but in a more endearing way.

The perception of this trope varies by culture. For instance, in Anglophone countries where individuality is highly valued, the trope is more likely to be negative, but in Asian and Latin American cultures where living with parents until (and even after) marriage is normal, that kind of devotion to one's parents is more likely to be seen positively.

Compare Even Bad Men Love Their Mamas and I Want My Mommy!. See also All Take and No Give. The Distaff Counterpart, Daddy's Girl, is less often portrayed as inherently a bad thing.