Gaia has Loads and Loads of Characters. Here they are - or at least some of them. 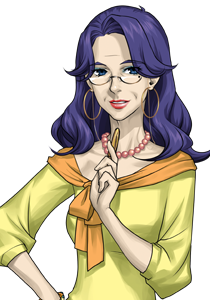 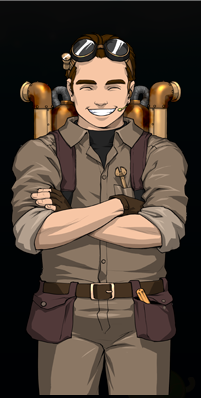 The assistant to your Aquarium. Currently living with Mirai. 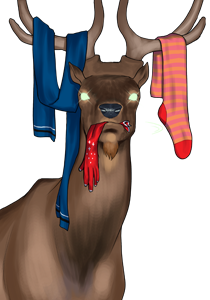 Apparently runs "Junk In The Trunk," and by "apparently," we mean "he's a perfectly normal deer standing behind the counter of a shop." And by "perfectly normal," we mean completely mundane. 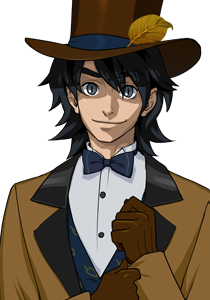 Captain of the Barton Regulars. Also runs the Guild Registry. 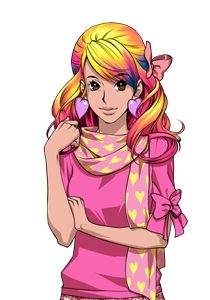 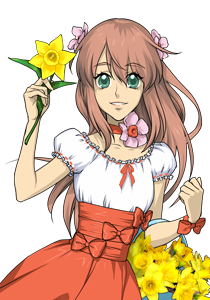 Owner of Barton Flowershoppe, now revamped into the Buttercup Café. 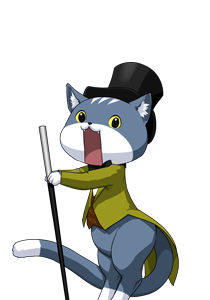 Ian's talking cat. He apparently comes from a "long line of talking cats" and help Ian run the store.

One of the legal bots living in Aekea. Works in The Faktori, a store for house items.

Another bot living in the town. Used to sell floor furnishing in the Factori until it replaced Josie in the Gaian Housing Commission. 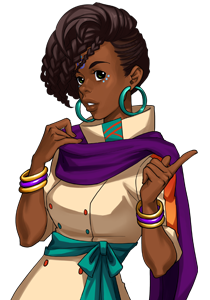 Previous owner of the Housing Commission. Now runs her own store with Global Imports, specializing in exotic and period clothing. 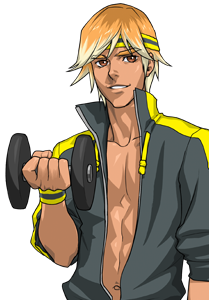 The third of the known Aekean bots. A specialist in wall furnishing in The Faktori. 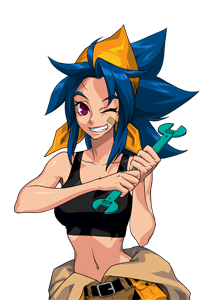 Helps Natasha run Skin Tyte. Has the hots for Lance. 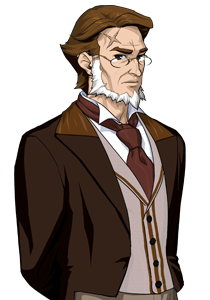 Runs H&R Wesley, a shop specializing in formal wear. Also a brilliant scientist who used to work for (and occasionally works with) Johnny K. Gambino. 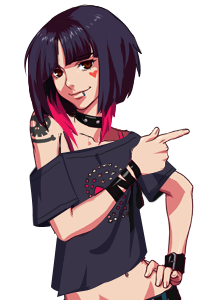 Owner of Crosstitch, a shop for items designed by Gaians. 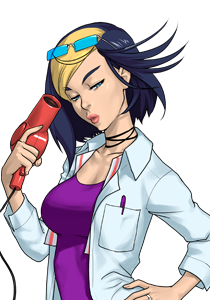 The baby daughter of Edmund and Vanessa

Manages Prize & Joy, where tickets won in the Gold Mountain casino can be redeemed for prizes.

Works at Gold Mountain as the second dealer you face in Blackjack.

Works at Gold Mountain as the first dealer you face in Blackjack. 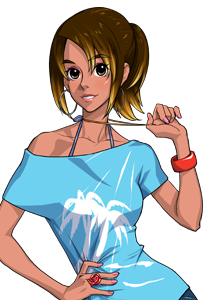 Owner of Gambino Outfitters, a shop specializing in beach and summer wear. Has swapped spit with Gino (and possibly his father, due to a Fusion Dance plotline). Also has dated Liam with the full knowledge of Gino and Ian having an interest in her. 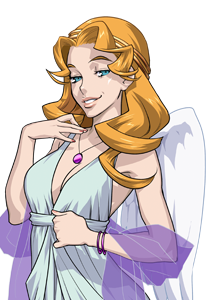 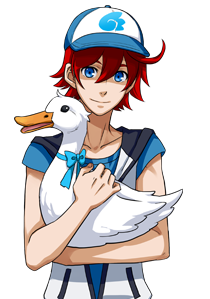 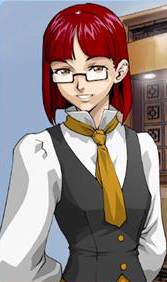 Works at the Bank of Gambino as a teller.

Worked for G-Corp before, during, and after the Zombie Apocalypse (both of them). Was apparently close friends with Labtech 123.

Ex-leader of Gaia's vampires. Father of Ian and Louie Von Helson, along with the twins. Presumed dead. 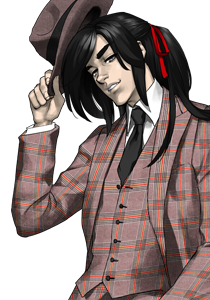 Son of Vladimir Von Helson, and younger brother of Ian Von Helson. Current leader of Gaia's vampires. May or may not be a Vegetarian Vampire. He is also the shopkeeper of H&R Wesley since Edmund's disappearance.

The pumpkin-headed Anthropomorphic Personification of Halloween.

The kindly old elf himself!

A demi-god of old transformed into a clam. Until Demonbusters, he was found in your aquarium. Took over Gino's body during the Demonbusters event; turned into a mortal human by Jack after the event.

A demi-goddess of old. Was stuck in a box for 1000 years, where she went mad. Tried to take over the world during the Demonbusters event; made into a mortal human by Jack after the event.

A god found on Dref Dur that also happens to be a son of Gaia (as in Mother Gaia) and the god that the Overseer and Sentinel seek to try and see if they can gain their powers back through him.

Another one of Gaia's sons. He is summoned by Luca to help the Kuro Clan. He is the one who has Don Kuro send assassins to kill Johnny K. and Gino Gambino.

Former runner of the Cash Shop

Dr. Singh's muchly-abused assistant. Used to be a cute kid. Was infected with pure evil once. Then he came down with megapuberty and got a Plot-Relevant Age-Up. 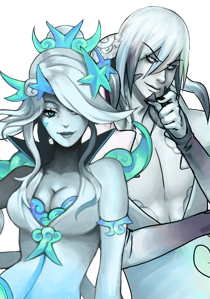 A collection of starpeople, consisting of Saiph (first appearing in the finale for the Fallen Wish EI,) his younger sister Hatsya (from the Lonely Star RIG,) and their older brother and sister Rigel and Mintaka (who currently run the Cash Shop). 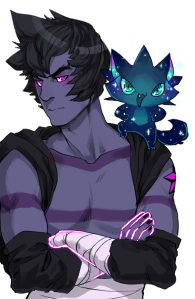 The current shopkeeper of La Victoire

Promotional Characters
Here because Gaia is in it for Money, Dear Boy.

A cute little sharkboy found in the special Venus Garden world. During the Demonbusters storyline, however, he took over for the Overseer in the aquariums while the latter was battling on the frontline. Is currently still there while the Overseer's fate is left uncertain.

The newest Gaia shopkeeper as of 2014. Runs Loyal's Bazaar. 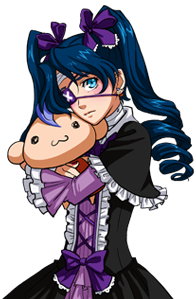 Runs Mecha Neko, a shop with anime-inspired clothing and gear.

G Corp Labtechs (Halloween 2k4)
A number of quirky personalities that were the focus of the plot during October 2004. Considered by many to be the most promising characters in the history of Gaia's storyline; sadly, they appear to have been Killed Off for Real.

Tried to escape after finding out some of G Corp's darker secrets, but was laid off by 247 as a security measure.

Blackmailed Gambino for a better pension.

Not the brightest crayon in the box.

Portrayed as relatively intelligent compared to some of his coworkers. Secretly married to 912.

Hardworking; eventually surpasses 247 in this trait. Tries to maintain a masculine image. Has a thing for 138.

A kleptomaniac, possibly without knowing it. Has a crush on 137.

Initially a workaholic whose first priority was loyalty to G Corp, but started breaking down when his memories began to return.

Gambling addict who became a human test subject (well, more so than the others) after losing a lot of Johnny K.'s money.

Not too much stands out about him. He is often asleep on the job.

Harbors countless conspiracy theories about G Corp; many of them are proven right as the plot unfolds.

The ghost of a mad king

The ghost of a wrestler

The guy from the Lusty Scoundrel collectible as a ghost.

A once beloved cryptid until his existence was confirmed by scientists.

The ghost of a dogwalker with a pack of ghostly dogs. 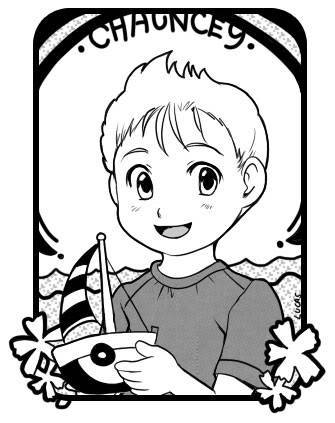 His Forum signature
In game appearance :

The ghost of a boy who appears to be about 5-7 years old. Died when his parents left him in the car on a hot day.

A beekeeper who died when trying to depose the queen bee and take over the hive.

A stunt performer who died in an accident.

A ghost of... something that spent his life running around mazes.

Michael's wife and groundskeeper at the cemetery. She died due to one of Omnidrink's products.

The ghost of a hippie.

The pimply teen who used to work at Gaia Theaters before it was removed from the site.

The ghost of one of Gambino's labtechs and a coworker of the ones from 2004. Doesn't realize he's dead - in fact, he doesn't even believe in ghosts.

A dentist who loves causing other people pain.

Formerly a scientist at Omnidrink, he quit in disgust when he realized how cruel his father was. Now works as the gravedigger.

An insufferable hipster who carries a guitar "ironically," as she doesn't even play.

The ghost of "an ace gunfighter with impeccable aim."

The ghost of a supermodel who, "now that she's off the catwalk, is unleashing her contempt of humanity on everyone."

A ghost who wanders around in chains dragging a ball. Is really fond of breaking mirrors for some reason. He used to work at a carnival in life.

The ghost of a stack of pancakes.

The ghost of a supervillain.

"Once a benevolent forest guardian, but now she serves as a twisted instrument to the ghostly cause." 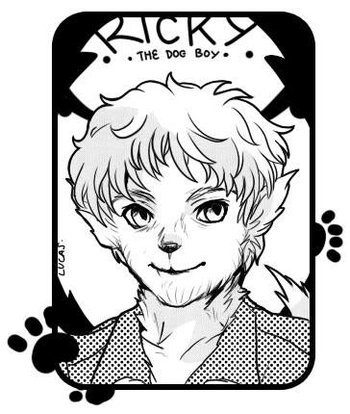 His Forum signature
In game appearance :

As his description mentions, he was a circus performer who liked face-grooming and catching frisbees with his mouth.

A pair of sadistic children who want to make people play all the games they hated. According to their description, they suffered some kind of mistreatment.

A ghost that delights in insulting other people. Wears a pimp hat, bling, and grill.

Founder of Omnidrink; pretty much defines Corrupt Corporate Executive, and is responsible for the ghosts appearing. 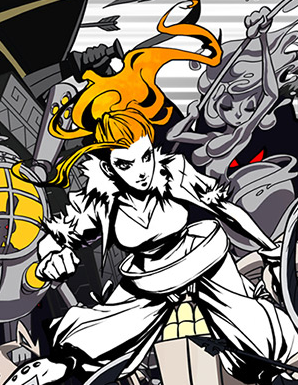 In the zOMG opening
Daughter of the pirate queen Marina, generally considered the mascot character for the game. 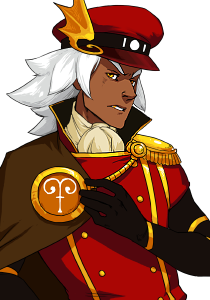 Owner of Gaia's only airship. Debuted on April Fools' Day of '09 in zOMG!, but has since barged into the main storyline.

A mysterious yet friendly nerd who initially provided your first rings.

A lumberjack you meet in Bass'Ken

The lighthousekeeper at Gold Beach

A Miko that resides in the Zen Gardens

Owner of the ingame Music Box

A barefoot NPC that you meet in Barton Town

Former owner of Back Alley Bargains. He lost his shop sometime before around 2017 because he couldn't make payments on it.

A chubby boy with a crush on farmhand Rubella

A farm who grows garlic on the side to keep away vampires and Purvis' father. 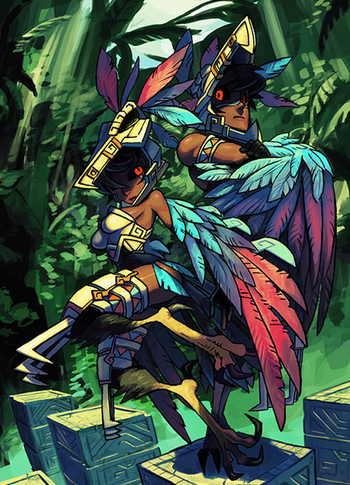 Their zOMG! wallpaper
A pair of fraternal twins found in Otami

An odd girl with pigtails who thinks she's a robot

An NPC found near the Music Box in Barton

Other enemies you can fight in zOMG! that aren't the Animated

Confused aliens that have landed on Earth to escape the Hive Aliens. Also known as "P3s"

Aliens that invaded the P3's planet

A shark-type creature that spawns during random events

Animals (besides grunnies) that were infected with the G-Virus

Runs the bait shop by Bass'ken Lake. Was involved with Agatha at some point.

Owner of Dernier*Cri, who gave up being a wizard for fashion. Is also the presumed owner of the Dark Reflection, as he appeared as the "Mysterious Man" in the RIG's Game Over scenario.

First introduced in the Midsummer Swirl RIG, Kanoko is an exchange student who just has no luck with keeping a job. Is currently employed as the shopkeeper of Rococo, but we'll see how long that lasts.

Also introduced in the Midsummer Swirl, as an "avid proponent of summertime evil". However, that "evil" really only extends to being a snarky little critter. Is speculated to either be owned by (or even created by) Brennivin.

A talkative little grunny who spoke with Radio Jack. He also owns a sextent and can guide an airship.

A sports announcer introduced during the Rejected Olympics of '09. Choked on a potato and died before Halloween; brought back to life during Halloween by Jack, and re-killed afterward when Jack crammed a potato down his throat. Currently roaming around as an angry ghost.

Green rabbits that used to be regular lab rabbits until they were infected with the G-Virus.