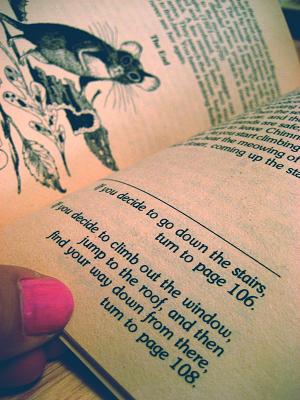 The choices are yours, and yours alone!
Advertisement:

Gamebooksnote  here referring to books that are games, not to be confused with books of rules for games. In tabletop RPG circles, to set them apart the latter may be called rulebooks, sourcebooks, splatbooks (or just splats), Player/Dungeon Master's Guides/Manuals/Handbooks, and so on. are Interactive Fiction and a paper Adventure Game. The player advances the action by reading a short passage describing a scene and choosing one of several actions. To take that action, the player reads a numbered section in the book. The Choose Your Own Adventure series is a famous and highly successful example of the gamebook genre with 250 million copies in print. The peak of the gamebook craze came in the 1980s, but the form is far from dead.

Example: You enter the marble-clad forum to discover a GHOUL feasting on a corpse. Do you want to:

Nearly all of these books feature Second-Person Narration, which is justified in a meta sort of way: you're the one reading the book and making the decisions about what to do next, so you should take the role of the protagonist. Occasionally there is a limited role for chance and player attributes in fighting and feats of skill. Mapping and note taking is often needed in more complex works. There are typically more ways of failing and/or dying than succeeding. Death can be cruel, creative, and messy.

Success often depends on a combination of luck, possession of difficult to obtain items and sometimes manipulation of the entry number to reach an entry unavailable any other way. Lock and Key Puzzles abound. Sometimes these puzzles are so obscure and unintuitive they are Solve the Soup Cans puzzles.

The directed graph of entries for a book can contain alternate paths to the same destination, loops, and occasionally island entries unreachable from any legitimate point in the book. Sometimes these unreachable entries are used to humorously scold the reader for cheating. On rare occasions, these islands have included the best ending/only ending in which the PC survives, rendering the whole thing Unwinnable. Most people end up playing with several fingers in the pages in order to go back and try again.

Gamebooks are a rich vein of fantasy, science-fiction and RPG tropes. Illustrations are a key element in setting the mood of a gamebook world.

Several people have written scripts for Internet gamebooks allowing the players to add new pages. The results are... interesting.

For those interested in creating their own choose your own adventure stories, several programs on the net allow for an easy access and coherent flowchart tool. A notable example is Twine,

a completely freeware program that can be either downloaded or used through a browser.

The Visual Novel medium is very similar to gamebooks (except in the case of the Kinetic Novels, which are linear like usual novels), and some may consider them a modern equivalent.

Examples in other media