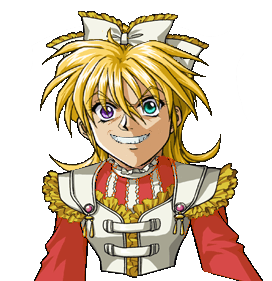 The Psychodere at the center of it all.
Advertisement:

Super Robot Wars Quest is a currently finished Quest Thread written on 4chan's /m/ board by Sciencegar Sciencebolt. The threads are archived under the Team Phantom Tiger Blog

note Protip: Use your browser's find function and search for "Sciencegar Sciencebolt" to skip over the trolls and most of the commentary, with cleaned up version of the first half here

and are commonly discussed on the Rizon#musouquest IRC channel. For those of you looking to catch up without slogging through the suggestions and trolling, cleaned-up archives are under construction on its own message board

Super Robot Wars Quest (colloquially, SRWQ) follows the story of the Shadow Mirror version of Katina Tarask as she attempts to survive the series of events that occur after a failed attempt by the Shadow Mirrors to invade the Original Generation universe.

The story is currently split into two "discs". Disc One opens with the psychotically Tsundere frilly-dressed Katina Tarask taking part in the attack upon the Tesla-Leicht institute as part of the Shadow Mirror, as seen in Super Robot Wars: Original Generation 2, when events diverge and the Original Generation cast instead invades the Shadow Mirror Universe. Events escalate as the Shadow Mirror forces are scattered and under attack from both the corrupted EFA and the Irregulars from the Original Generation universe. Katina's group picks up the Super Robot Raioh, which becomes Katina's main mech, and its transformable support mech, the DGG-XAM-04, controlled by an A.I. known as the Dynamic Unlimited Military Intelligence, or Dumi, for short. Eventually, it is revealed that Dumi is in fact the Shadow Mirror Verse's version of Duminass, sent to search for the Compatible Kaiser. Together with Katina's help, he plans a way for him to disobey his master Dark Brain's orders: to create a new universe out of shards of universes Dark Brain has already destroyed, with the Kaiser at the middle.

The currently running Disc 2 opens with Katina waking up in an unfamiliar location, and follows Katina's attempt to refind her allies that have been scattered across the Patchwork, while at the same time attempting to prevent any more pointless wars by uniting the disparate factions from the shards.

Series Prominently Featured in Disc 2, via either direct importation of elements or Grail War participants:

This Quest provides examples of:

"S-stupid EFA pilot! It's not like I hate you or anything...I JUST LOVE THE SOUND YOUR FLESH MAKES AS IT'S RENT IN BETWEEN THE SCRAP LEFT IN YOUR UNIT!"