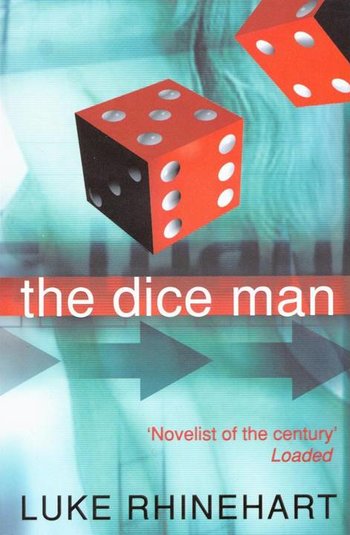 "Anybody can be anybody"- Luke Rhinehart"
Advertisement:

The Dice Man is a novel published in 1971 by George Cockcroft under the pen name Luke Rhinehart and tells the story of a psychiatrist who begins making life decisions based on the casting of dice. Cult black comedy favorite.

Luke Rhinehart, respected psychiatrist and family man, is in a slump. Bored to insanity by his humdrum life, he conducts a psychological experiment to destroy the self, by letting the role of a die determine his next actions. From here, after surrendering his will, he takes all the risks he's denied himself. The path of the dice however, leads him to become a cult leader, adulterer, underground activist, millionaire, asylum inmate, murderer and fugitive.

Not to be confused with the British travel documentary inspired by the work which shares its name, the Dice Man Comic Book / Game Book hybrid or with comedian Andrew "Dice" Clay.