List of The World God Only Knows capture targets. In order to save girls from Demonic Possession of sorts, the protagonist Keima Katsuragi is forced to make girls fall in love with him, thus up their hearts and banishing the devils in their souls, after which their conscious and accessible memories of him are removed. Keima generally refers to these girls as either his conquests or capture targets.

Advertisement:
open/close all folders
Capture Targets as a group
Females whom Keima has to get close to in order to get the "Runaway Spirit"note "Loose Soul"/Weiss out of them.
Advertisement: 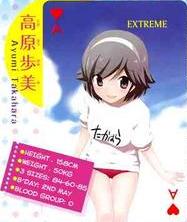 An athletic girl in Keima's homeroom and a member of the school's track-and-field club. Even after her Runaway Spirit was captured and she lost her memories of Keima, she still kept lingering feelings for him, which confused her immensely. She still shows up from time to time as a friend to Keima and Elsea, and plays guitar in Chihiro's band.

Her younger self appears alongside Chihiro in the third memory fragment of the Heart of Jupiter arc as one of Maijima East's elementary students. 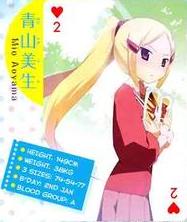 A haughty girl whose father was the head of a major company. Unbeknownst to her classmates, her father had actually passed away recently, and Mio is actually poor now, but she's too proud to admit it. She makes brief appearances later on during Yui's capture, and at the Mai-High Festival selling bread.

Along side Yui, her younger self appears in the second memory fragment of the Heart of Jupiter arc as one of Urara Shiratori's friends. 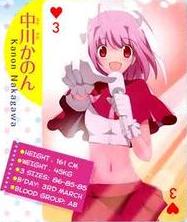 Keima's classmate and a popular idol singer. She is a very dependent girl who desperately wants people to acknowledge her, so naturally she becomes immensely interested in Keima when she discovers he has no idea who she is. The Runaway Spirit that possessed her turned her invisible whenever she felt neglected. Later, she meets with Keima and Elsie again when studying for tests and Chihiro begins to view her as a rival for her band the 2B Pencils. 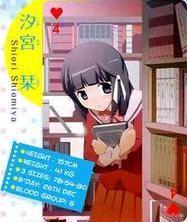 A very shy girl who loves to read books, and the secretary of the school's Book Committee. She spends most of her time practically living in the school library, where she has developed an emotional attachment to the books. Her arc focuses around her difficulty in speaking to others. 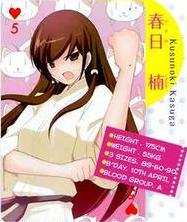 The captain of the school's girls' karate club, who has repressed her feminine side in order to take up her father's dojo. She claims to hate weak things, but deep down she has a soft spot for them, which she tries her best to hide. As her personality continues to polarize, the Runaway Spirit possessing her causes her feminine side to manifest itself as a separate person and challenge her for control of her body. She appears again during her elder sister Hinoki's capture. 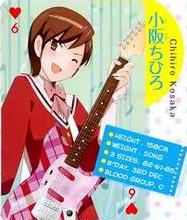 Another student in Keima's homeroom and close friend of Ayumi. She's completely average in almost every way imaginable, a fact that she's woefully aware of. Wanting excitement in her life, she has a habit of confessing to popular guys in her school, although she sets her sights too high and is always rejected. She later goes on to start her own band, the 2-B Pencils, for which she does guitar and vocals.

Her younger self appears alongside Ayumi in the third memory fragment of the Heart of Jupiter arc as one of Maijima East's elementary students. 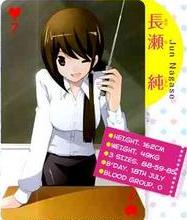 A university student training to become a teacher, who comes to Keima's school to teach for two weeks. She's very passionate about everything she does, and is also a big fan of pro wrestler Jumbo Tsuruma. Believing Keima to be a troubled student, she spends much effort trying to reach out to him. 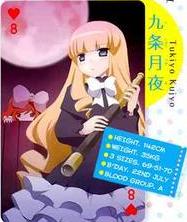 The only member of the school astronomy club, who spends her time watching the moon with her doll Luna. She cares only for "beautiful" things, and considers things like emotion to be ugly. Like Keima, she holds disdain towards reality, and prefers to live in her own fantasy world (on the moon). Based on her feelings, her Runaway Spirit shrinks her to the size of a doll. 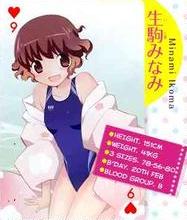 A middle-schooler and member of the school swim team, although only as the third substitute. She is indecisive about her life, and contemplates quitting the swim team until she meets Keima, whom she erroneously believes to be an older member of the swim team. Her story arc is told primarily through her own point of view rather than Keima's, depicting her growth in confidence as she idolizes Keima as her sempai. 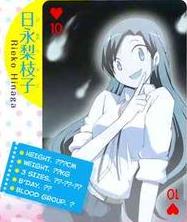 A ghostly girl manifested by a Runaway Spirit. Rieko herself is an elderly woman, but the spirit appears as a manifestation of her longing for past memories. 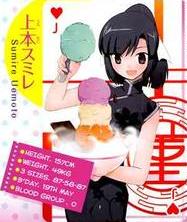 The daughter of a ramen restaurant owner who's eager to take up the family business, but her father disapproves of her desire. Wishing to prove herself to her father, she gets Keima to assist her in creating the perfect ramen recipe. 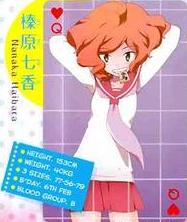 A shogi enthusiast who once lost to her classmate Tenri when she was possessed by Diana. She took the loss very hard, and has devoted herself to beating her in a rematch. 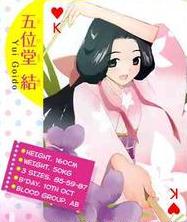 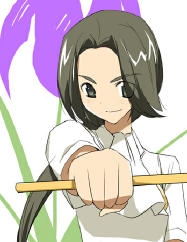 A rich heiress living a suffocating life under pressure from her parents to be the perfect daughter. Her desire to escape her life is finally granted when her Runaway Spirit lets her switch bodies with another person. She later joins as the drummer of Chihiro's band, the 2-B Pencils.

Along side Mio, her younger self appears in the second memory fragment of the Heart of Jupiter arc as one of Urara Shiratori's friends. 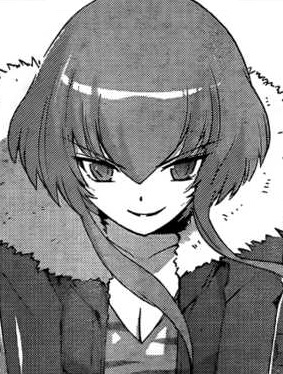 The elder sister of Kusunoki Kasuga. An eccentric fashion designer, actress, and artist who always carries around a megaphone. Came back to Maijima City after 5 years. 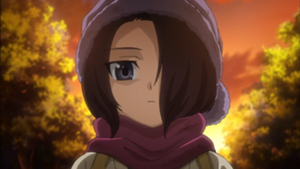 Member/Head of the Biology Club. Older than Keima, but smaller. Has a frail appearance. Wants to create a "Perfect Human" (using a robot). In truth, she was acting as bait to draw out an enemy target, but the one who responded was Keima. Though he concludes that it was a failed capture, he actually has more success than he assumed: He caught her interest enough for her to actually remember his name. Elsie failed to meet her throughout the entire capture operation. 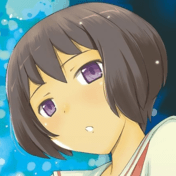 A mysterious girl that Keima needs to conquer during the first memory fragment of the Heart of Jupiter arc.

A young girl Keima meets in the second memory fragment of the Heart of Jupiter arc. She is descended from one of the founders of the present Maijima High School. 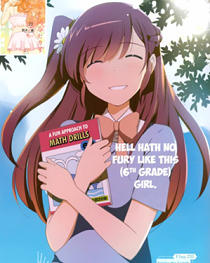 A 6th grade student of Maijima East Elementary School who Keima meets during the third memory fragment of the Heart of Jupiter arc. Of the school's female ranking system, she is ranked number one overall.

Amami Tooru is a girl that rescues Keima from a building while wearing an angel cosplay. Her behavior is rather irrational so far as Keima is concerned, making it difficult to get a real grasp on her personality.

A quiet, ordinary girl from Keima's class, she interacts little with others.

A miko from from Toyoboshi Shrine on Mt. Uryu.

A girl who has no interests.