Apart from its already large normal cast, there are a number of supporting characters in The World God Only Knows, most of them being family, friends, teachers or other students. 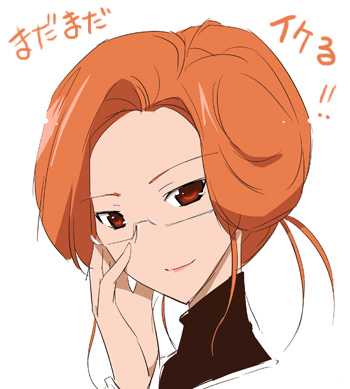 Keima's mother, an ordinary Japanese housewife... who used to run with biker gangs. She runs a little cafe from the Katsuragi home, "Cafe Grandpa". She loves Keima, but worries about his future. She adores Elsie, whom she thinks is her husband's illegitimate daughter, and treats her like her own.

Keima's father, a man who is almost never home due to travel for work.

Keima's grandfather and Keiichi's father. He once lived in Maijima City but gave his house to Keima's family when their house was destroyed in an earthquake 10 years prior to the story. He and his wife now live in Yamaguchi Village.

Keima's homeroom teacher and the senpai of Jun Nagase. She frequently abuses Keima, but (like the rest of his teachers) has mostly given up on scolding him.

A classmate of Keima who is a member of the track-and-field club with Ayumi then later in Chihiro's band, the 2-B Pencils.

Keima's classmate who appears from time to time.

An English teacher in Majima Academy, and the homeroom teacher to class 3-D.

Head of the library committee.

A group of delinquent students.

Haqua's partner, a middle-aged Gokult saleslady. Not the fastest of workers, especially now she's getting on, but not to be underestimated either.

Ryou is Nora's partner, and apart from standing around being pretty doesn't seem to actually be good at anything. Due to his incompetence, Nora tends to end up doing most of the work, leading to unpredictable results.

An idol group that was composed of Lime, Yuri, and Kanon. They broke up sometime before Kanon began her solo career.

Mio's father, a president of a company before his death.

The matriarch of the Goido household.

One of the Shiratori's stewards, she watches over Urara.

Urara's grandfather and the president of the Shiratori company.

Urara's mother and Shoutarou's daughter-in-law who was possessed by a devil.

A three girl group made of 4th graders armed with water guns. They consist of Mami, Emi, and Yumi.

A comedy duo made of Maiko and Mariko.