Even with a small cast, every character is almost unique enough on their own to have a respective mention of associated tropes. 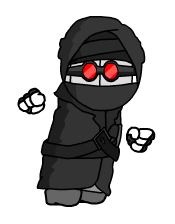 The "Protagonist" of the series. Hank is partially responsible for kicking the plot of the series. Existing for seemingly no reason but to kill everything in his path, Hank is an absolute monster in combat, skilled in any weapon he can pick up.

He first started out as a guy who started brawl over a boombox. Then went to kill someone named The Sheriff for unknown reasons. Apparently dying in his first attempt, he was revived and he tried again. During his second attempt, the Sheriff activated a device called "Improbability Drive" causing the destruction of reality and random events to happen.

Apparently succeeding in killing the Sheriff, Hank then chose to hunt down the newly zombified Tricky, but was unable to succeed due to the timely intervention of Jebus. Using a suicide bomb, Hank manages to kill himself and Jebus. Hank has somehow been able to survive the past events and continued his mission, but Jebus has also survived the encounter.

In the heat of a fight between Hank and Jebus, Tricky suddenly appears and establishes himself as another more deadly nemesis for Hank. After the clown becomes empowered by unknown means, he uses his new form to torment and chase Hank vowing to make him suffer.

Seemingly growing tired of fighting, dying and being resurrected repeatedly, Hank is given a merciful rest by Jebus. But he is revived once more by two new protagonists, this time specifically to fight The Auditor. And thus, he decides to fight once more... 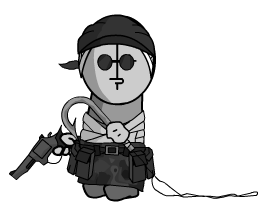 A deuteragonist of the series alongside his partner Deimos, who made his official debut in Aggregation (although their chronological debut was in Depredation). He and Deimos seem to be allied with Hank as they back him up and later show up with a much more important role in Aggregation onwards. After Deimos is untimely killed in Aggregation, Sanford takes on a more active role as Hank’s partner in arms against the Auditor. 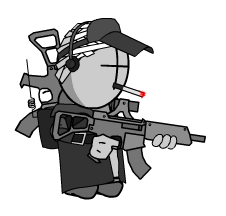 The other Deuteragonist who fights alongside Sanford, and both seem to be on the same side as Hank. Deimos backs Sanford up and they seem to have a dynamic going – Sanford is more serious and experienced in combat whilst Deimos can be seen doing something silly at least once per episode that they feature in. He is also the only protagonist smoker which might have foreshadowed his untimely death after he revived Hank in Aggregation, due to the Running Gag of smokers being offed in the series.

He later on becomes the Protagonist of the "Dedmos" spin-off series created by Krinkels. 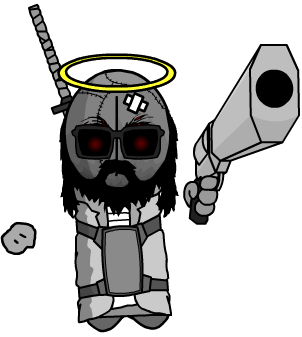 The self-proclaimed "Savior" of Nevada. Almost as Badass as Hank and with plenty of seemingly-divine power to make up the difference. Super Strength, Flight, telekinetic bullet shields, zombification powers, disintegration Eye Beams and even the ability to come Back from the Dead are just a few of the reasons you should start praying when you see this guy.

J started out as just another combatant in the boombox brawl, and though he put up more of a fight than anyone else he was eventually taken down by Hank. After that he took up the role of the Sheriff's strongest bodyguard, and earned his keep for a not insignificant amount of time. Following the Sheriff's death J struck out on a vendetta against Hank, only to get sidetracked by several other, more pressing threats throughout Nevada...

Eventually J was able to put a bullet through Hank's head for what he believed to be the final time, and refocused his efforts on the bigger threat: the Auditor. Taking up mantle of the protagonist, he wages a one-transhuman war against the AAHW... and promptly gets himself Killed Off for Real by helping to destroy the Auditor's Improbability Drive. 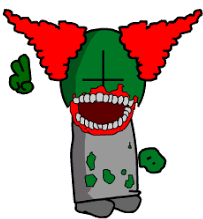 A deadly clown with a bloodthirsty streak a mile wide. Originally one of the Sheriff's men, Tricky was effortlessly cut down by Hank, but given new life by the "higher powers" to continue the fight. Since then he's become one of Hank's most dangerous adversaries, sporting nearly Reality Warper-level thanks to his Portable Improbability Drive and an unquenchable lust for violence and suffering. 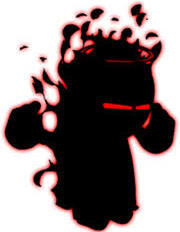 The one who manages the Improbability Drives, keeping the world in a state of madness by essentially hacking reality. He is something like a Living Shadow, able to morph around space and obstacles or phase through almost every form of attack. He can also summon any type of weapon for him to use; whether it be swords or guns.

After Jesus' death, the Auditor takes his halo for himself, granting him even more abilities as well as enhancing his personal powers, giving him the ability to enhance mooks into superhuman threats capable of being an actual threat to the protagonists, as well as cast flaming darkness capable of disintegrating things and people much like Jesus. He can also consume people's bodies - whether it be living or dead - to increase his size and power.

It is Hank's, Sanford's, and Deimos' goal to take him down, and end the Madness. At first this seemed to be achieved at the end of Abrogation, thanks to Tricky being absorbed and causing his body to explode. However, in Expurgation, he manipulates Hank and Sanford into destroying Tricky so that he can regain control, apparently killing Hank and Sanford in the process. So, for the time being, The Bad Guy Wins.

An organisation of armed agents under the command of the Sheriff and as revealed later, the Auditor, who are more often than not cannon-fodder for the series’ protagonists to tear through indiscriminately. They come in a few varieties:

Tropes associated with the AAHW:
Grunts

Ordinary, unadorned mooks with little combat skill outside of handling melee and some light weapons. They were most common from episodes 1 to 4 after which Agents become more popular.
Agents

Also known as 1337 agents, these make up a substantial part of the AAHW and are sometimes referred to as a sector of their own (also called the 1337 crew). They first appeared in Episode 4 (Apotheosis) and are meant to be more trained than grunts.

Mask-wearing soldiers with more weapons expertise and weirdly yellow blood which may or may not be a result of the enhanced genetic testing behind their creations. They are far more equipped and skilled than the other classes, and act as superior units. They first appeared in Consternation although the first chronological-to-canon appearance was the one at the end of 5.5 who shoots Sanford.
ATP Soldats

First introduced in 7.5, these are another yellow-blooded class of elite AAHW who are supposedly more aggressive than the Engineers and just as armed up. They are recognizable for their single eyepieces.
MAG Agents

Huge, genetically modified experiments who have been magnified to about thrice the size of a normal character. They use their bulk and brute strength against the protagonists, as well as enormous weapons crafted for their size. There are many different kinds of MAG agents and it seems the AAHW has means to produce them en masse. The first MAG agent (known as Torture) was seen opposing Hank in Consternation. 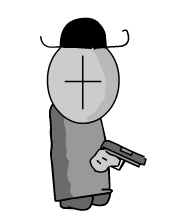 The sheriff of Nevada who was Hank’s target for assassination in the second and third episodes (respectively, Redeemer and Avenger). He is a cowardly, pretty much useless figure of authority whose only real power was by the title and the mysterious Improbability Drive he activated in Avenger, which inadvertently started off the whole breakdown of reality throughout the series. He gets Killed Off for Real by Hank, and even Krinkels said good riddance.

However, he does make a reappearance in Project Nexus, and returns in the sequel with a much more intimidating design and proactive demeanor.

Tropes associated with The Sheriff:
The Hot Dog Vendor

A twice-seen character in the canon episodes who is just a simple civilian selling hotdogs around Nevada, wearing a sauce-stained apron. So far, he is one of very few characters that has been seen in multiple episodes and not died.

Tropes associated with the Hotdog Vendor:
The Higher Powers

Mysterious, as-of-yet unseen beings (if they are not the 'Employers' who appear in Project Nexus 2) which seem to have a hand in the series by resurrecting key characters and possibly directing the actions of the Anti-AAHW. They are associated with the white lightning bolts that are seen reviving others, and have been alluded to a few times by Krinkels himself.

First seen in Dedmos Rebuilt, 2BDamned is an enigmatic individual that's responsible for reviving Deimos from hell, as well as likely being the one that upgraded him. He's probably a member of the Anti-AAHW, although the exact details are hazy.