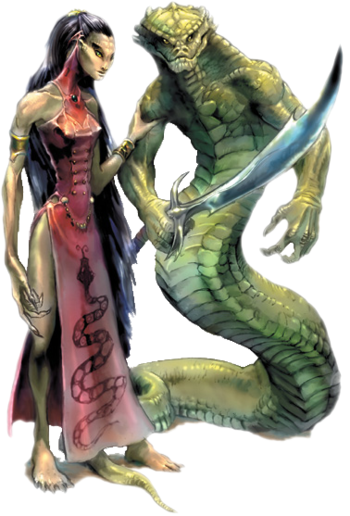 Why did it have to be snake people?
Tang Shen's once beautiful long black hair had been replaced with a writhing nest of dark indigo snakes. Her face retained a semblance of her original self, only now it was pale white, smooth, and covered in scales. From her partially opened mouth, he could see a forked tongue and long fangs. Where her nose had been was a pair of small slits, and the minimal makeup she'd been wearing had seemed to have seeped into her scales for the only color on her pale white face.
The rest of her was just as unnerving. The dark blue gi she had been wearing was in tatters over her body, creating a stark contrast to the milky white scales that covered her. Where her legs used to be was a long serpent-like tail with a sharp arrow-like tip at the end. Her hands were still human-shaped, but now sported long knife-like fingernails that were curled in the shape of fangs.
— Same Difference, "A Mother's Love"
Advertisement:

Snake People, Nagas, Lamias, Valusians, or (courtesy of Steven Universe) "Sneople" are a type of liminal being usually depicted with a human head, arms and torso with the added twist of a snake's tail as a lower body, similar in many respects to a mermaid, centaur, and some genies. Beings like this can also involve more exotic bodily configurations such as wings or changing the ratio of snake to human. Also, for some reason, most examples are female.note The reason is breasts.

Snake People may have some proficiency for aquatic movement as well, either being superior swimmers than other species or actually being able to breathe underwater, in which case they would be a subtrope of Unscaled Merfolk, with the best of both worlds. They may or may not talk in Sssssnake Talk. Similarly, they are often evil because Snakes Are Sinister, but like many other Cute Monster Girls, Dark Is Not Evil may come into play. Or they were already villains who just turned into snakes.

Traditionally, Lamia was a Libyan queen who ate children, but John Keats might have turned her into a snake woman even though she wasn't originally, possibly combining her with Lilith, who was associated with the serpent in the Garden of Eden.

In Hinduism and Hindu Mythology, Nagas (more properly nagin or nagini if a female) are a very diverse group of snake-related entities, ranging from nature spirits to gods. Perhaps influencing the number of Snake People who are Multi-Armed and Dangerous. Though the Naga of Hindu myth themselves usually only have two arms or none; the prevalence of four-armed (or more) Naga is a result of conflating them with the major Hindu gods who usually have extra arms. Sometimes they have multiple heads.

Compare with Lizard Folk (another species likely to be behind a Reptilian Conspiracy), and with Gorgeous Gorgon when the Snake Person is hot. Because Snakes Are Sexy, this happens quite often even though snake people are, like mermaids, frequently subject to the Mermaid Problem.

Medusa is occasionally depicted this way.