Warning: This page will contain spoilers for the Marvel Cinematic Universe. Read at your own risk. 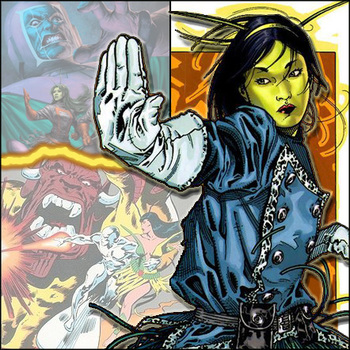 To describe Mantis as having one of the weirdest, most complicated histories in all of superhero comics would be an understatement. Originally introduced as the title character of the Celestial Madonna storyline in Avengers, Mantis is a Vietnamese martial artist raised by Kree monks to become the savior of a plant-like alien race called the Cotati. After becoming an Avenger and joining them on some of their adventures, she eventually departs the team to realize her destiny as the so-called "Celestial Madonna."

And then she winds up in The DCU as a character named "Willow," following co-creator Steve Englehart's move to the Distinguished Competition in 1977. While she's never explicitly identified as Mantis in those particular comics, it's very much implied to be the case. She then appears as "Lorelei" in the Eclipse Comics Scorpio Rose, before finally returning to the Marvel Universe under Englehart's pen in 1987, now with green skin and an upgraded power set that includes invulnerability, empathy, chlorokinesis, self-healing, and precognition.

She'd remain a background player in the cosmic side of the Marvel Universe for quite a while until the Annihilation event series, which then segued into a regular role in the reboot of Guardians of the Galaxy in 2008. Because of her new empathic abilities, she mostly served as a support player for the team, helping mediate all the different personalities onboard their roster, but she did spend on time on the field with the rest of them throughout the run.

Perhaps because of her convoluted nature in the comics, a streamlined version of Mantis appears in the Marvel Cinematic Universe, portrayed there by Pom Klementieff. Debuting in 2017's Guardians of the Galaxy Vol. 2, this iteration is an alien woman of unknown origin with empathic powers who serves as the ward (and servant) of Ego. Though initially loyal to him, she soon defects to the Guardians of the Galaxy, and aids them in defeating Ego before he can colonize the entire universe. She appears again in 2018's Avengers: Infinity War, now having been a full member of the team for a number of years when the story begins, and plays an instrumental role in helping prevent Thanos from completing the Infinity Gauntlet.