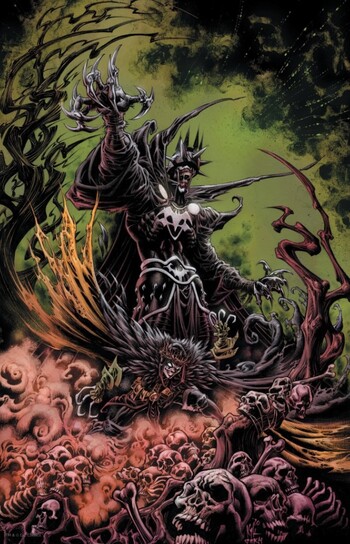 "I will be the bullet. The multiverse will be the dark alley. And its worlds will fall like pearls before me."
"I will take you to a hell without exit or end. And there I will murder your souls! And make you crawl and beg! And die! Die! Die for Darkseid!"
—Darkseid, Final Crisis, spoken through the mouths of one billion slaves
Advertisement:

A list of Complete Monsters in the DC Universe and associated continuities.

Other comics under DC or related imprints (like Wild Storm or Vertigo) can be found mostly here; or at the appropriate franchise's subpage (Arrowverse; Star Trek; etc.).

Post-Crisis (May Also Include Pre-Crisis)