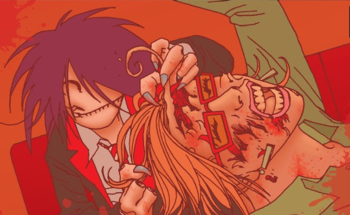 "Now, unless I've lost my touch, I'll be able to shear you in one single piece. So much neater than strips of bloody flesh."
"I was to accept a sodden piece of clay as my master. Be christened by him. Tamed by him. Come when he called me. There. A classroom now full of eight-year-olds devouring their teacher. And there. An operating theater where patients are carefully, lovingly dissected. Let them see for themselves how tame I am."
—The Beast, "Staring at the Wall" arc
Advertisement:

Besides The First, entries in each group are by approximate order of appearance.