WARNING: Unmarked spoilers! Read at your own risk!

"I'm the one who decides my fate, even if I have to will that fate into existence. Make sure to never forget that."
Voiced by: Ryota Ohsaka (Japanese) and Kaiji Tang (English)

The protagonist of the game, Fang is a 20-year old man who cares about nothing except eating and sleeping. He first gets roped into the story after pulling out a Fury and bonding with its fairy, Eryn, out of a desire to wish for some food to eat. After learning that Eryn had lost her memories, he sets out on a journey to collect the furies, not out of a desire to save the world, but simply to help his new friend retrieve what she had lost. 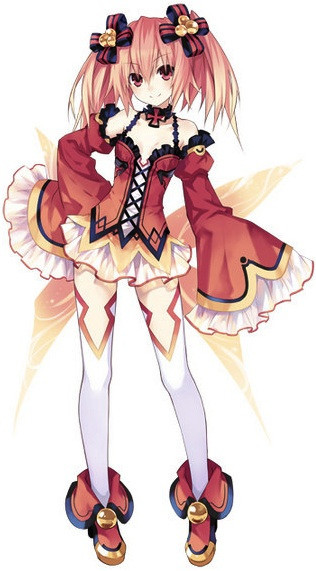 "How many times do I have to tell you!? I'm your partner. We're in this together. Now c'mon, fight!"'
Voiced by: Rumi Ookubo (Japanese) and Erica Mendez (English)

The 17-year old fairy residing in the Fury Fang lifted, and thus became bonded to him as his partner. She is considered an irregularity among the fairies because she is an amnesiac, and none of the other fairies they encounter recognize her. Thus one of the main goals of the game is recovering her lost memories and reviving the goddess with the information those memories provide the party. Though she and Fang argue a lot, they are actually very similar in terms of personality and get along well when they are not making snide comments at each other. 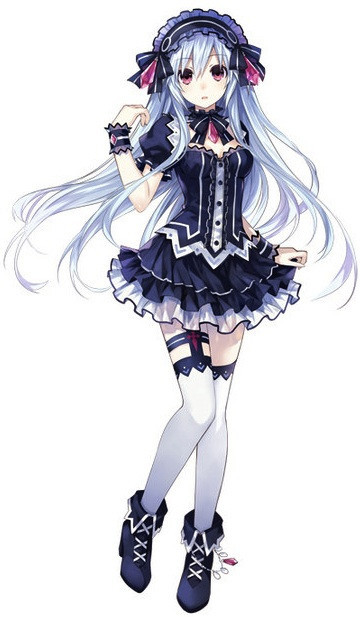 "Oh my. Not one word of gratitude after I just served you some delicious tea? How rude."'
Voiced by: Kaori Ishihara (Japanese) and Natalie Hoover (English)

An 18-year old fencer Fang and Eryn encounter on their first attempt at retrieving a Fury, and the other main heroine. Her first impression wasn't very good, since not many people are likely to appreciate being fed paralytic tea, but as the story progresses their relationship improves. The very image of a rich and proper girl, however her masochistic tendencies in response to Fang's verbal abuse makes tends to shatter that ideal image. She claims to be on a journey to revive the Goddess for the sake of world peace.

"Since I gave you some information, let me tag along. I'd like to thoroughly study how you guys work in the field."
Voiced by: Nao Tōyama (Japanese) and Erika Harlacher (English)

A 24-year old fairy researcher who joins the party out of interest in the unusual circumstances surrounding Eryn. A complete and utter slob who forgets to even put on clothes most of the time, to the utter despair of her fairy partner. Regardless she is still a diligent worker and strives to have a better understanding of the bonds between human and fairy. Is apparently oblivious to the fact that her looks attract a lot of attention.

Bahus
"You should be grateful. Not everyone gets to enjoy my delicious desserts."
Voiced by: Masaki Terasoma (Japanese) and Ray Chase (English)

Harley's put-upon, 41-year old fairy companion. He's a friendly and genial man who cooks and cleans for Harley because she's too lazy to do anything herself.

A low-ranking 20-year old Dorfa operative who works for Zenke. He joins the party after Fang defeats him; the two have a strange synergy and agree on a lot of things.

Advertisement:
Marissa
"I apologize for any inconvenience my Galdy-kins causes you."
Voiced by: Kayano Ide (Japanese) and Erika Harlacher (English)

Galdo's 22-year old fairy. They've been together since he was ten, so she basically raised him. She often dotes over him like a mother would to a spoiled child.

Pippin (Pipin)
"A human's character is more important than their appearance. You should all learn to be more discerning of others."
Voiced by: Asami Shimoda (Japanese) and Cristina Vee (English)

A very strange Fencer who is often mistaken for a fairy, due to apparently being an animated plushie. He absolutely refuses to explain any aspect of his appearance. He's a veteran Fencer who often gives advice to the younger party members and tells stories about his "youth". He fights with his fists.

Soji
"Pippin's story is about to become rather long. Shall I brew you all a cup of tea?"
Voice by: Yuki Ono (Japanese) and Derek Stephen Prince (English)

Pippin's 20-year old fairy, he looks completely human and is often mistaken for the Fencer of the relationship. He doesn't seem to see anything strange about Pippin. 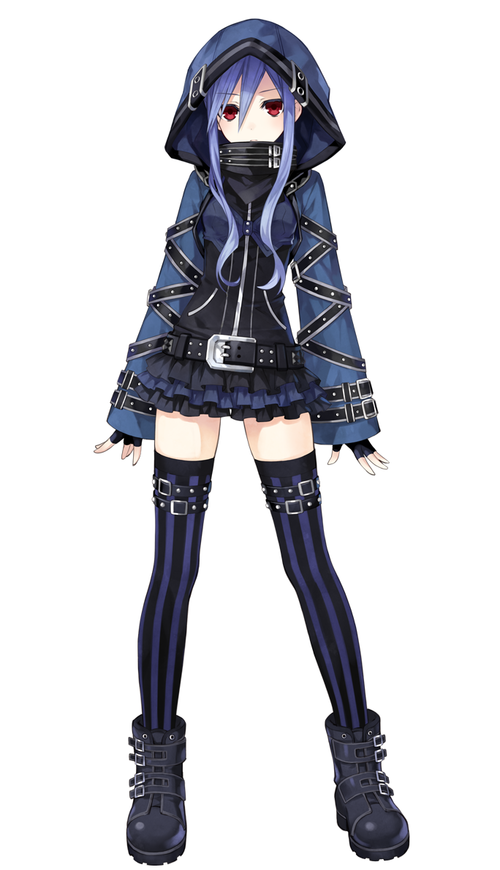 A silent 16-year old Fencer who ambushes Fang and the party when they travel to Bui Valley. She has a cold and mechanical attitude and only communicates using various forms of the word "kill". Her fairy partner, Karin, interprets her words for her. She has no ambition or greater purpose than fighting Fencers.

She has a little more screen time in Advent Dark Force, where she and her fairy also appear at the Katticus Ice Caves and at Dorfa's party.

Ethel's 16-year old fairy partner and interpreter. In stark contrast to her Fencer, she is quite friendly, but she still follows her and obeys her whims.

"My dream is peace. A peace that will blanket this entire world like pure, white snow."
Voiced by: Takuya Eguchi (Japanese), Alan Lee (English)

A refined, handsome 21-year old gentleman who believes strongly in justice and wants to use his wish to bring peace to the world. Seemingly perfect in many aspects. He charms Eryn and Tiara almost instantaneously, much to Fang's (and later Galdo's) annoyance. 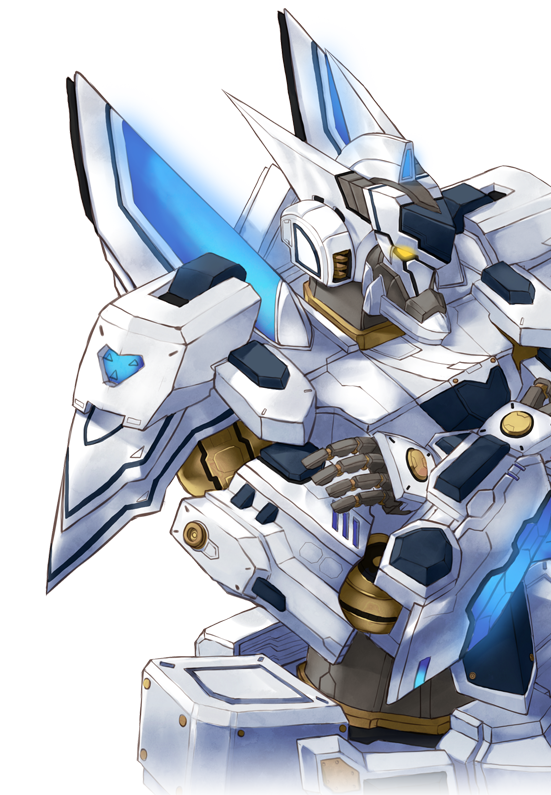 Ryushin is Sherman's Fairy partner. He's a robot-type Fairy with a serious and straight-laced personality. Somewhat thickheaded and unable to adapt to the situation. He is completely devoted to Sherman, and believes there is no better Fencer in the world than him. 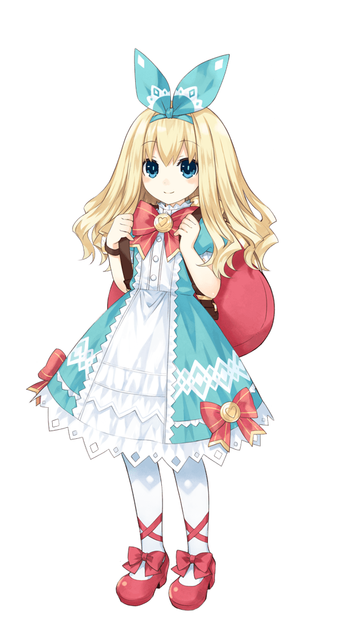 An 12-year old information broker who charges exorbitant prices, but is so useful that everyone pays anyway.

"We'll continue to expand the company until it's known throughout the entire world."
Voiced by Nobuhiro Fukai (Japanese), Ray Chase (English)

The 52-year old leader of Dorfa. He plans to resurrect the Vile God to conquer the world and bring peace. 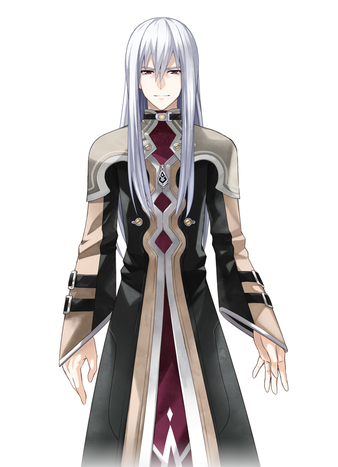 "Naturally, I plan to separate his head from his shoulders the moment we meet."
Voiced by: Kohei Murakami (Japanese) and Robbie Daymond (English)

One of Dorfa's top executives, being ranked as a Financial Director, but not one of the Four Heavenly Czars. In the original timeline, he plans to use Dorfa to help complete his own personal goals, and is quite sadistic and ruthless despite his calm demeanor. He believes that power is the best way to communicate one's intent. Age 35. 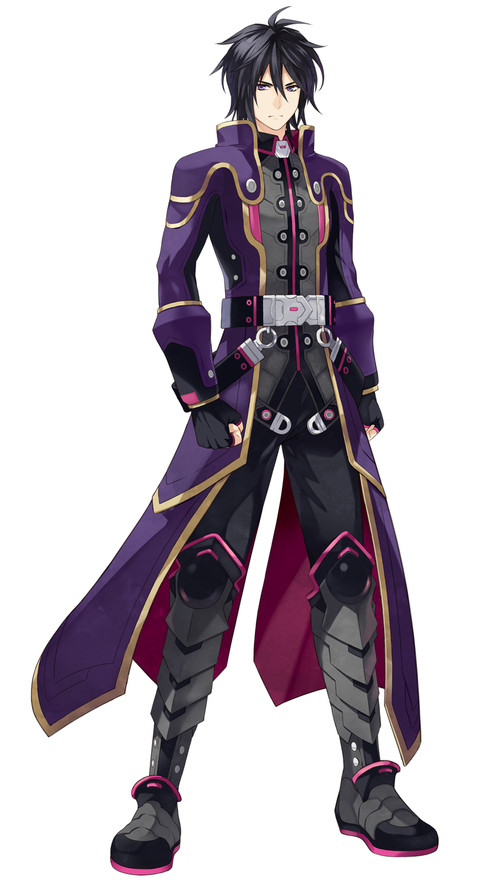 One of Dorfa's Four Heavenly Czars, Apollonius, age 24, is considered one of the strongest Fencers in the world, and has the skills to back that title. He lives his life adhering to the warriors' code, and would rather die in battle than be treated mercifully in anyway. Extremely stoic and blunt, but has a code of honor that makes him clash with the more detestable parts of Dorfa like Zenke.

"...Any betrayal against Dorfa is unforgivable."
Voiced by: Rui Tanabe (Japanese) and Dorothy Elias-Fahn (English)

One of Dorfa's Four Heavenly Czars, and the one most dedicated to Dorfa's cause. She spends her spare time at an orphanage, playing her harp for the children. Age 24. 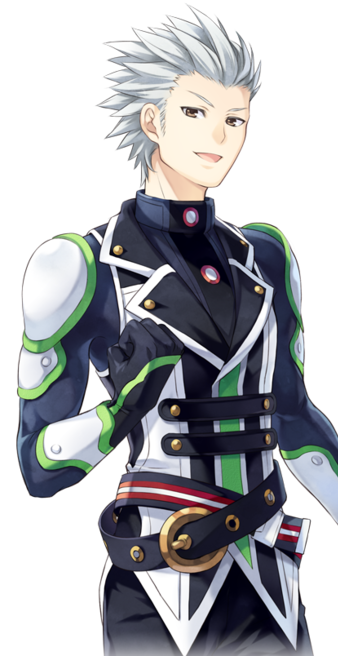 A low-ranking Dorfa employee who was fired, but re-hired as Marianna's personal guard. As such, he is extremely dedicated to her. Age 19.

"You're so cute! I could just eat you up! Would you like that? Do you want me to eat your GUTS?"
Voiced by: Yoshitsugu Matsuoka (Japanese) and Sean Chiplock (English)

One of Dorfa's Four Heavenly Czars. He's a bloodthirsty psychopath even by their standards, and often lusts for killing and blood. He often kills his own soldiers at the slightest provocation, and enjoys forcing people to kill their loved ones for his amusement. Age 22.

"We especially can't risk damaging Dorfa's reputation! Our stock would fall drastically, we'd lose all public trust, and once that happens, we can kiss our year-end bonuses good-bye! If that happens, how am I supposed to pay my mortgage, my daughter's tuition, or my bar tab?"
Voiced by: Youji Ueda (Japanese) and Kyle Hebert (English)

One of Dorfa's Four Heavenly Czars, despite the fact that he has no interest in their goals and virtually no applicable skills. He spends most of his time bullied by everyone else, only staying so that he can provide for his wife and three kids. Age 44. 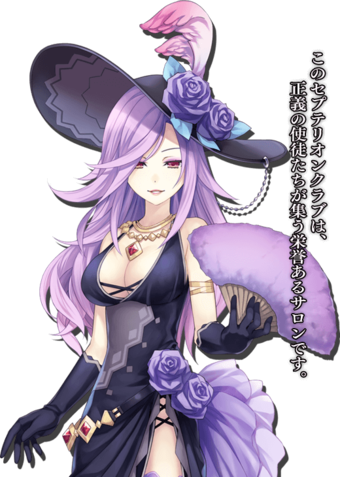 The manager of the Septerion Club. She's selling her wine for ridiculously high prices, with the final goal of reviving the Evil Goddess. 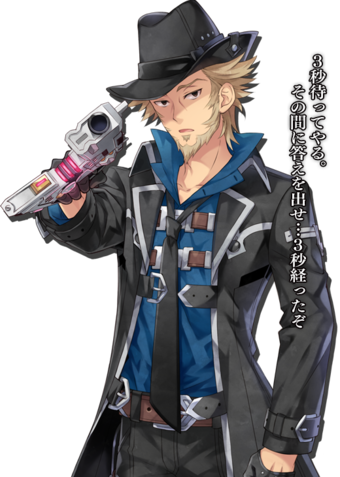 A 29-year old assassin working for the Septerion Club. He constantly talks about wanting to die, hoping to reincarnate as an insect. 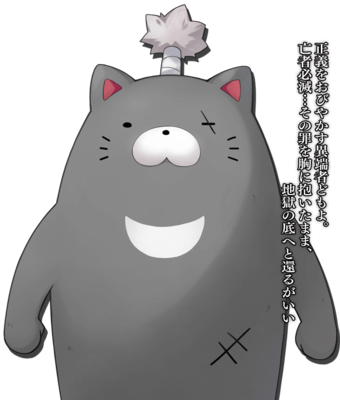 Pippin's father, who's working for the Septerion Club. He's strongly devoted to the way of the warrior, and believes in absolute justice. 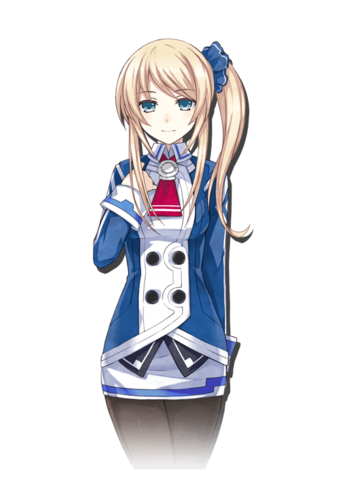 A young girl working for the Septerion Club. According to Sherman, she looks very similar to his deceased sister.