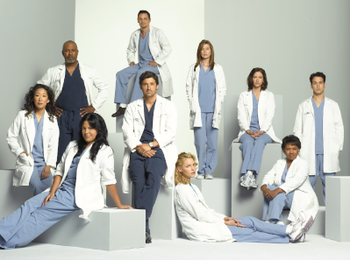 Welcome to Seattle Grace-Mercy West.
"To be a good surgeon you have to think like a surgeon. Emotions are messy."
— Meredith Grey
Advertisement:

Grey's Anatomy is a Long-Running Medical Drama. Its creator and showrunner was Shonda Rhimes, and it is this work which put Rhimes on the map.

Beginning its life in 2005 as a Mid Season Replacement, Grey's quickly became known for being sort of, well, quirky, especially given its genre: in addition to McNicknaming and using the word "seriously" more than we use the word "egregious", the show focused more on the romantic and sex lives of its characters rather than on the medical cases. Case in point: the first scene of the pilot episode is Narrator Meredith Grey waking up after a one-night-stand with a hot guy named Derek and rushing off to her first day as an intern at Seattle Grace Hospital... only to discover that said one-night-stand, Dr. Shepherd, works there too.

The show follows the lives, both personal and professional, of a group of surgeons at Grey Sloan Memorial Hospital (formerly Seattle Grace, and then Seattle Grace-Mercy West following a merger in Season 6). Most episodes are narrated by Meredith, a world-weary intern struggling to deal with her mother's Alzheimer's syndrome. Though initially focused on Meredith, the other four interns and their immediate superiors, the show has introduced numerous characters since its onset, resulting in a large ensemble cast. Additionally, the show has matured somewhat in later years; the wackiness and sexcapades have been largely toned down, resulting in a more serious character study. Some found this deplorable, but the show continues to pull high ratings.

, the famous textbook on human anatomy the title is based on.

It forms part of an Expanded Universe, with sister show Private Practice forming part of the universe, canonically, with the mini-series Grey's Anatomy: B-Team contributing to further focus on interns during the mid-season break, and another spin-off about the Seattle Fire Department, Station 19, beginning in 2018. Possibly part of canon, though not referenced in the show, is the videogame (Grey's Anatomy: The Video Game) featuring its own integrated episodic story arc.

One of the Long-Runners, the show's future was put in doubt when leading lady Ellen Pompeo — who has made no bones of the fact that she stayed in the role for the stability of a steady paycheck — officially left in November 2022, partway through Season 19. Rhimes has always claimed that the show would end when Pompeo decided she'd had enough... But Rhimes has since left to work for Creator/Netflix, leaving someone else as showrunner. The question of where Grey's Anatomy will go without the eponymous Meredith Grey is, as yet, undetermined.

Spoilers unmarked up to Season 14