One-Hit Kill
aka: One Hit KO 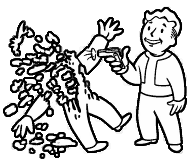 Over already?
Any time people gather with the goal of hitting each other until one of them keels over, the ultimate trump card would be a weapon, spell, technique, trick, or what-have-you that makes people fall over immediately, without all that annoying strategizing and healing and stuff. The One-Hit Kill is that trump card.
Advertisement:

Usually, the One-Hit Kill comes at a price. Sometimes it's a Dangerous Forbidden Technique which to use requires Casting From Hit Points or life span, other times it's just really hard to pull off, or leaves you wide open for a counterattack. One-Hit Kills are a common spell in RPGs. In video RPGs, it's frequently a Useless Useful Spell because of low hit rates, inability to affect bosses, or a prohibitive cost required to cast it, if not all three combined. Tabletop RPGs, by contrast, have a history of letting those pesky spellcasters make these spells insufficiently useless, turning many fights into a mere Quick Draw contest. In martial arts, it frequently takes the form of the Touch of Death. If it only works at the start of a fight, it's a Back Stab. If it only works at the end of a fight, it's a Finishing Move. If every enemy attack is a one-hit kill, the protagonist is a One-Hit-Point Wonder. If every attack by both you and the enemy is a one-hit kill, you get Rocket-Tag Gameplay.

With bladed weapons, cinematic representation of this trope often becomes a Single-Stroke Battle. When a character opens a fight with their most powerful attack in hope of a one-hit kill, the trope overlaps with Begin with a Finisher.

See also Chunky Salsa Rule. Often a Death-or-Glory Attack. Compare Coup de Grâce. Note that if the battle is laughably brief because the attacker is much more powerful, as opposed to simply using an instant-death weapon, it's a Curb-Stomp Battle. Compare/Contrast HP to 1, where the attack is merciful enough to spare a single Hit Point. A Mook that can deliver this is an Instakill Mook.

Example of:
Cutscene Power to the Max