This page is for listing the tropes related to post-release DLC characters who are found in Dragon Age II.

The Big Bad of the Legacy DLC; a mysterious darkspawn sealed away many years ago by the Grey Wardens. As Malcolm Hawke was the last mage to reinforce those seals, Corypheus now seeks the blood of Malcolm's children in order to escape.

For more info, see this page. Beware, massive spoilers ahead. 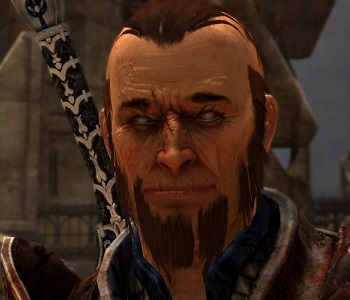 Voiced by: Brian George
"Always a punishment for playing with things you don't understand..."

The former Warden-Commander of the Vimmark Mountains, Larius left the Grey Warden order when the time for his Calling came, though he still hasn't died yet. He is found within Corypheus's prison, claiming that Corypheus must not be released into the world and begging for Hawke's help in killing him. 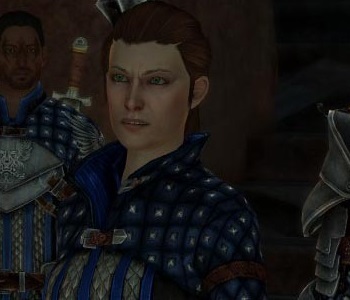 Voiced by: Natasha Little
"This prison will be broken. The Blights will end."

A Grey Warden mage, Janeka is seen leading a group of Grey Wardens into the Vimmark Mountains to seek a way to free Corypheus. She believes that she can bind Corypheus to her will and use him to end future Blights once and for all. This has caused her to come to blows with Larius. 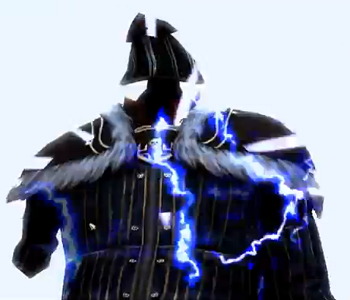 "Does anyone else hear drumming?"
—Anders

A secret boss encountered in the Vimmark Chasm if Hawke returns to an obelisk after obtaining the Warm Orb.

Mark of the Assassin 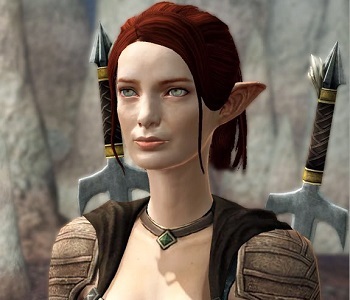 Voiced by and modeled after: Felicia Day
"You go elbow-deep in wyvern shit and I'M the weird one?"

An elven thief who teams up with Hawke in Mark of the Assassin to steal a gem called the Heart of the Many from Duke Prosper. 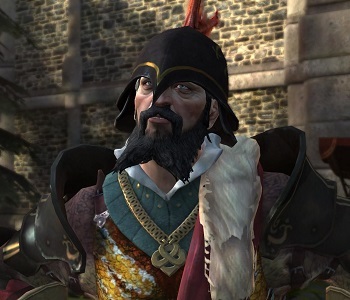 Voiced by: Philippe Smolikowski
An Orlesian noble who lives on an estate outside of Kirkwall. He owns the Heart of the Many, the gem that Tallis is after.
Cahir 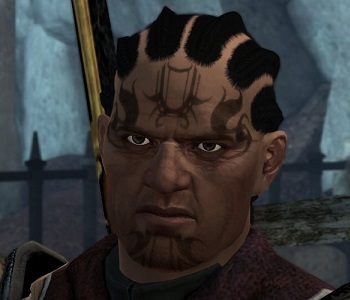 "The Duke is a fool, his enemies a posturing, guileless lot; but you are worth testing."

Prosper's Chasind bodyguard. How he came to work for an Orlesian noble is unclear, but he clearly doesn't care for it. 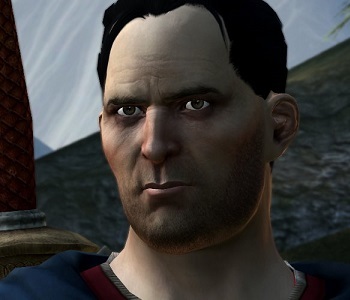 Voiced by: Nicholas Boulton
"I paid good coin to be the one who wins this contest! It was MY turn!"

An Orlesian noble participating in Duke Prosper's hunt, Arlange shows up after Hawke becomes the first to kill a wyvern, claiming that he paid good money to be the winner of the competition. He then attempts to kill Hawke so that he can claim credit for first kill, which doesn't end well for him.