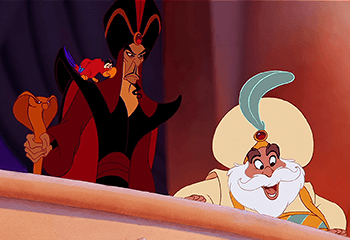 Take a wild guess which one he is.
"Grand Viziers were always scheming megalomaniacs. It was probably in the job description: 'Are you a devious, plotting, unreliable madman? Ah, good, then you can be my most trusted advisor.'"
— Terry Pratchett, Interesting Times
Advertisement:

Sometimes it's the monarch/Head of State who's the Evil Overlord. And sometimes there's this trope, where instead of the Head of State being the person who has malicious intent, it's his adviser, assistant, second-in-command, or Head of Government (that is if the Head of State and Head of Government are separate positions, e.g. having both a President and a Prime Minister respectively). Most of the time he's actively scheming to discredit or usurp the throne, and may even be an agent sent for this purpose by an outside power. In other cases, he's perfectly content to be The Man Behind the Man and keeps the ruler around primarily as the figurehead for the ignorant masses and as the fall guy if something goes wrong. He can also tend to have more actual power and real influence than the Head of State, especially in cases where the government is a parliamentary system or a constitutional monarchy.

Sometimes called the Evil (Grand) Vizier instead, in which case he will spend a lot of time tapping his fingertips together and calling everyone "effendi". The "Evil High Priest" is a closely related phenomenon, with some Sinister Minister and Corrupt Church thrown in. In stories set in Presidential democratic societies, an Evil Vice President may play the same role, although it is a lot less common. note In the American political system in particular, there is a fairly legitimate reason why the vice president is an illogical position to be filled by someone evil: by default, the vice president (generally) has very little actual power, unless the president is incapacitated or has delegated significant amounts of formal authority to the vice president. However, if the Vice President is planning to have the President be assassinated or the President is an easily controlled fool, this trope would easily apply. However, the opposite applies in the French political system; while the Prime Minister of France doesn't assume presidential authority if the President's dead or incapacitated (that would be the President of the Senate's job), he does a lot more say over the day-to-day operation of the government than the American Vice President. And South Korea's presidential system is the best of both worlds - for an Evil Chancellor, that is: the South Korean Prime Minister both has day-to-day authority over the Government like his French counterpart, while also being the President's designated constitutional successor. "Evil Regent" is another variant; see Regent for Life.

While Chancellors, Vice Presidents, and the like may not always be examples of this trope merely by having the job, the title "Grand Vizier" might as well just include "Evil" as part of it, in the eyes of English-speaking audiences, especially if the Vizier's name is some version of "Jafar". If you see a non-evil Grand Vizier, the author is probably playing with the trope... or you're talking about Real Life (the historical Ja'far ibn Yahya, while a Vizier, was not particularly Evil, and in general "vizier" is just the Persian-influenced Muslim world's word for "[government] minister"). The word "Chancellor" itself has also got a bad taste in English countries, due to one of the most famous real-life codifiers of the Evil Chancellor character (even though he largely isn't an example of this trope).note Under the Weimar Constitution, the Chancellor was the effective leader of the government, the President being the largely ceremonial (though not nigh-entirely so like that of today's Germany) head of state, and in any case the Chancellor didn't really "advise" the President in a meaningful sense. More to the point, though, Hitler took the head of state position himself after just over a year and a half as Chancellor, meaning that to the extent that he was as Chancellor advisor to anyone, it was to himself as Führer.

Malicious Slander is a particular favorite of the Evil Chancellor.

As cliched as this trope may seem, it is often justified in that if anybody's going to usurp the reigning ruler through manipulation and intrigue, it's going to be the guy who actually has the authority to replace him. Part of the basis of this trope may also come from the context in which stories are written; in a monarchy, it can be dangerous to tell stories about an evil king, so pushing all the blame onto an evil adviser is an easy way out. This extends into political commentary as well — it is safer to vilify an adviser for hated policies than the leader themselves.

If only the King thinks the evil chancellor is his most trusted and loyal subject, he's a Horrible Judge of Character and a Clueless Boss. When only the protagonists see through the evil of this character, it's a Devil in Plain Sight. If he doesn't want to steal the throne himself, then his goal is almost certainly to turn the ruler he allegedly serves into a Puppet King.

This trope is the Evil Counterpart of The Good Chancellor. See also: The Evil Prince, who is usually also after the throne and rather less willing to remain in the shadows. In fantasy settings, will often overlap with an Evil Sorcerer; if his "official" job is to be the ruler's personal magic-user, then he's also the Court Mage. In settings with a strong Islamic and/or Asian influence, expect overlap with Eunuchs Are Evil. Aspiring backstabbers may refer to the Evil Chancellor List. If the ruler the Evil Chancellor "serves" is also evil, that's The Starscream.

In terms of the ranks of Authority Tropes, the tropes that are equal are The Good Chancellor, Lady Macbeth (when it's the Queen/First Lady who's doing the scheming), Standard Royal Court and Decadent Court. The next steps up are The Evil Prince, Prince Charming, Prince Charmless, Warrior Prince, Princely Young Man, The Wise Prince, and all Princess Tropes. The next step down is The Brigadier. Also see Treacherous Advisor.

Compare Dragon with an Agenda.