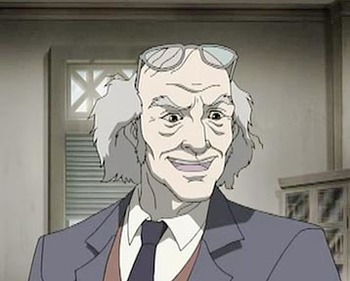 A defense attorney who was hired to defend R. Kelly from charges of sexual contact with a minor (urinating on a teen girl). 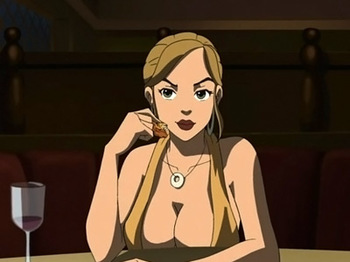 A prostitute whom Robert dated in "Guess Hoe's Coming To Dinner". She works for A Pimp Named Slickback.

An imaginary villain who haunts Tom DuBois' dreams. He's a prison inmate who is constantly trying to rape him.

A drug dealer who attempted to murder Gangstalicious. After failing the first time, he and two of his goons chase Gangstalicious and Riley across town to finish him off.

An iconic leader of the Civil Rights Movement. In "Return of the King", a hypothetical scenario depicts him surviving the assassination attempt in 1968, becoming comatose until he wakes up in 2000.

A painter who gives Riley some art lessons after he's caught spraying graffiti. Ironically, he helps Riley improve his graffiti skills by teaching him how to paint cool murals on houses.

An old friend of Robert, whom he knew from way back when they served in the US Army Air Forces in World War II. Apparently not a good friend, as they split due to Moe's abrasive personality, and eventually a dispute over a woman they both sought after. After Moe's death, Robert (begrudgingly) attends his funeral in Chicago.

Huey's former (best) friend from Chicago. When the Freemans return to Chicago for Moe's funeral, Huey finds out the hard way that Cairo isn't really interested in a reunion, due to Cairo's lingering resentment against Huey for leaving. Things only get uglier from there on.

Shabazz is a Black Panther who was wrongly convicted of, and sentenced to death for, the murder of a cop named Gary Faulkner in 1970. His new pen pal Huey plans to break him out of prison before his execution.

A famous R&B singer whom Sarah and Jazmine are big fans of. Tom becomes concerned when it seems that Sarah (who is increasingly frustrated with her husband) is now developing romantic feelings for Usher.

The spirit of a rapper, who appears to Huey to give him advice on dealing with the ghost of Stinkmeaner. 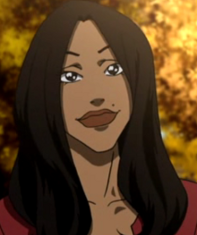 Luna is the antagonist of "Attack of the Killer Kung-Fu Wolf Bitch". She was briefly Robert's girlfriend, but turned out to be a deadly martial artist who was emotionally unstable. She doesn't take his rejection well... 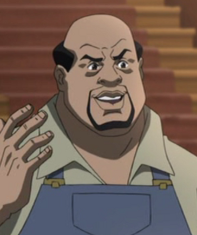 Voiced by: Cedric the Entertainer

A relative of Robert Freeman. Jericho and his branch of the family fled from New Orleans after Hurricane Katrina, only to move into Robert's house and shamelessly mooch off of him.

A hapless teacher at Huey's and Riley's school, who is woefully unequipped to interact with his new rush of black students. He is Huey's and Jazmine's teacher in the comics, but Riley's teacher (for one episode) in the show; in both cases, he blunders through dealing with his students in ways that increasingly annoy them.

A far-right media personality who appears in "The S-Word" as Rollo Goodlove's adversary in numerous debates. It turns out that she's a completely different person in private and is collaberating with Rollo to gain publicity for the both of them.

Catcher Freeman is the protagonist of "The Story of Catcher Freeman". According to folklore, Catcher was a freed slave who lived in the 1860s; but the exact details of his story are disputed by Robert, Ruckus, and Huey.

Thelma is Catcher's lover and later wife. She was a field slave who worked for Massa Colonel, but she eventually assisted in a slave revolt against him.

A house slave who served as Massa Colonel's right-hand man. He has a one-sided crush on Thelma, but tries to warn the Colonel about the slave rebellion.

A Confederate Army officer and plantation owner who was killed during a slave insurrection.

The evil CEO of the BET network, who plans to destroy black people.

The President of Entertainment for BET. He produces a reality show starring Uncle Ruckus.

Barack Obama is the 44th President of the United States. His election is the focus of "It's A Black President, Huey Freeman", and he also cameos in "The Fried Chicken Flu" and "It's Goin' Down" (voice only).

A wealthy businessman from Wushung, China. He tries to settle Ed Wuncler I's massive debt to him by gambling with the outcome of a kickball game between Woodcrest and Wushung; if Wushung wins, then Long-dou will seize all of Wuncler's real estate in Woodcrest.

Mr. Long-dou's granddaughter, who has been trained as an expert kickball player. Ming was Huey's rival and opponent in a kickball game.

A white nationalist country singer known for almost exclusively recording anti-black music. Much to his surprise (but not ours), his biggest fan is a black man named Uncle Ruckus. The two become close friends anyways. 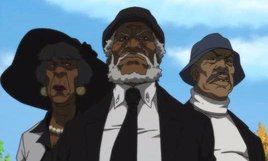 The leader of the gang, he's the bearded man wearing a black hat.

The sole woman of the group.

The other man of the trio, he's the one with the mustache and blue hat. 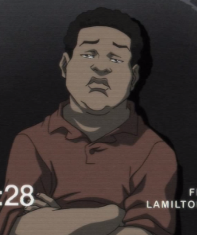 A preteen psychopath, whom Riley makes the mistake of hanging out with.

Lamilton's psychiatrist. After studying his anti-social behavior, Doomis became obsessed with stopping Lamilton before he ends up killing someone.

The boss of the UK-based World's Ultimate Chocolate company, which produces chocolate bars for school fundraisers — and also happens to be a front for organized crime. He doesn't react well to Riley and his friends starting their own chocolate business. 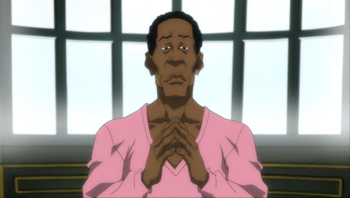 A gay black playwright/screenwriter. In "Pause", he recruits Granddad to act in one of his productions, but he is oblivious to Winston's plan to have sex with him. 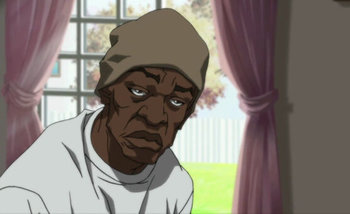 A gardener and landscaper who claims to be the illegitimate son of Robert Freeman and one of his ex-girlfriends (Marietta). Lando and Robert set out to find the truth (and bond together if necessary).

Robert's Girl of the Week in "The Lovely Ebony Brown". Unlike Robert's previous girlfriends, Ebony is a very pleasant woman and not bat-shit crazy at all. In the end though, Robert's paranoid insecurities lead them to splitting up anyways.

The mother of Mister Ruckus, and the paternal grandmother of Uncle Ruckus. She's just as ancient as she is hateful.

The father of Uncle Ruckus. Uncle hates his dad with a passion (and with good reason).

The mother of Uncle Ruckus. She loves her children, but also loves white people more than her own race.

Uncle's younger twin brothers. Despite growing up in such an unhappy family, they became functioning members of society.

A federal government agent who is assigned to stop a mysterious terrorist plot in Woodcrest.

A private security guard who worked at the Wuncler Tower. Ed I, Ed III, and Rummy conspired to murder Dan with a bomb, so they can paint him as a martyr and profit from it.

Voiced by: Michael B. Jordan

An R&B singer who, much like Usher, seemed to be a threat to Tom's and Sarah's marriage. At the same time though, he gives Tom his own advice about women.

A businesswoman and mobster who runs a hair salon for black women. She sells an explosive compound created by the Freemans as hair gel.

An elderly woman from a nursing home who gives Robert a job of being a male "escort" (prostitute) to lonely younger women.

A 39-year-old woman whom Robert meets while working as an escort for Geraldine.

A civil rights leader who organized one of the Freedom Rides in 1961. He met Robert when he accidentally boarded their bus, forcing him to stay along for the dangerous road trip. Appears in "Freedom Ride or Die".

A woman claiming to be a long-lost half-sister of the Kardashians, who is trying to get her own reality TV series. Robert dates her in hopes of paying off his debt to Wuncler.

An application that came with Robert's iPhone. This Siri is far smarter than it should be, and menaces Robert.

The clone of Colonel H. Stinkmeaner, created in an illegal underground laboratory. The original Stinkmeaner posthumously gives him instructions to start a new Nigga Moment with Robert Freeman.

A gay rights activist who was a former associate (and protege) of Rollo Goodlove. After Riley is accused of being homophobic towards a fellow student, Sweetlove tries to force him to apologize.

A mental disability activist who, after learning that Riley is a "special needs" kid, note This was actually a lie made up by Robert and Rollo to excuse him from Sweetlove's gay protesters. asks Riley to join a footrace with other "special" children.