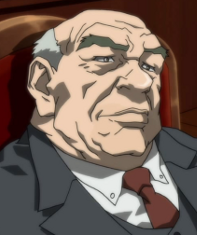 Ed Wuncler I is the wealthiest businessman in Woodcrest. Not surprisingly, his greed and amorality are insatiable. 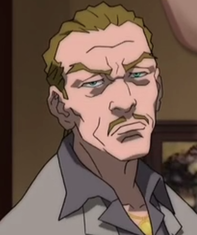 Ed Wuncler II is the son of Ed I, and father of Ed III. The main antagonist of the Season 4 story arc, he's a Loan Shark who only worsens Robert's bankruptcy and makes him fall in debt to him. 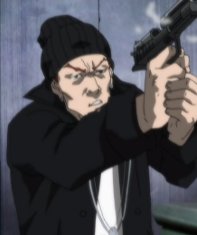 Ed Wuncler III is the youngest (and dumbest) member of the Wuncler family. After returning from the Iraq War, he and his best friend Gin Rummy commit a series of petty crimes. 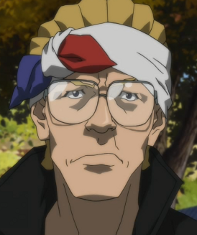 Ed III's best friend, a fellow Army veteran, and his partner in crime.

(A Pimp Named) Slickback note According to himself, one must always call him by his full title. 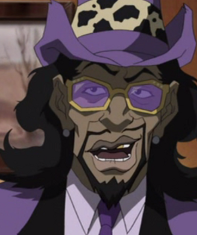 A pimp who first appears as the boss of a prostitute named Cristal, and later offers Tom his own twisted advice about marriage problems. He is very sensitive about people getting his name wrong. It's not "Slickback", it's "A Pimp Named Slickback", and one must say the whole thing. Yes, every time.

Colonel H. "Muthafuckin'" Stinkmeaner note As far as we know, he's not a military officer. 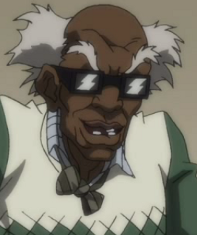 An old and blind black man with a sadistic sense of humor. He starts a legendary "Nigga Moment" (blood feud) with Robert Freeman, which results in his accidental killing of Stinkmeaner during a street fight. Afterwards though, Stinkmeaner escapes from Hell and haunts Robert as a ghost. Later on, Stinkmeaner's acquaintances (and even his clone) also come for revenge. 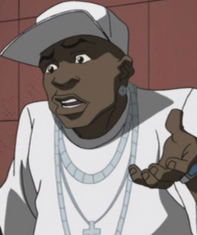 Riley's second favorite rapper, who turns out to be a closet gay man. 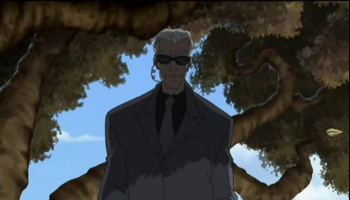 Huey's nickname for a federal agent who seems to be stalking him. Is he real, or imaginary? He seems to know everything about Huey. He appears in "The Real" and "It's Going Down". 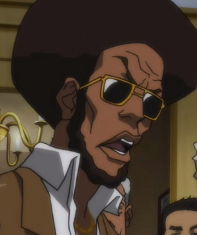 A legendary martial artist and professional bodyguard. He was hired by Oprah Winfrey, and later by Robert Freeman.

Mrs. Betty von Heusen note No husband is ever seen or mentioned. 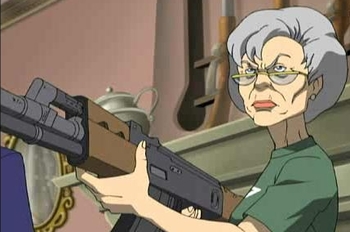 An elderly white woman who's in charge of the local neighborhood watch, along with a pro-gun interest group. 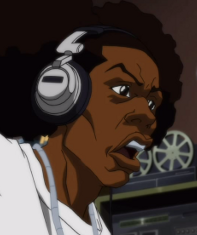 Riley's new favorite rapper, who moves into a huge mansion just across the street. In Season 3, he becomes broke while his music career ends, so he has to take a job as a UPS driver. 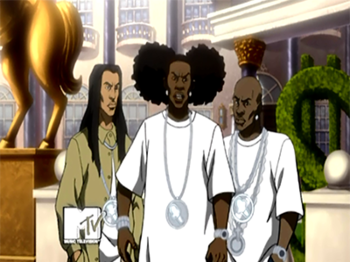 Thugnificent with Macktastic (left) and Flonominal (right).
A group of Thugnificent's friends, including two fellow rappers. They live with Thugnificent at his mansion in Woodcrest, until the events of "Bitches to Rags" cause them to move out and split up.

A friend of Thugnificent, and a fellow rapper of the Lethal Interjection Crew.

Another friend of Thugnificent, also a fellow rapper of the Lethal Interjection Crew. 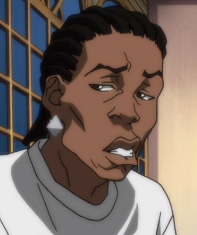 Yet another friend of Thugnificent, and also counted as part of the Lethal Interjection Crew, although he's not a rapper. 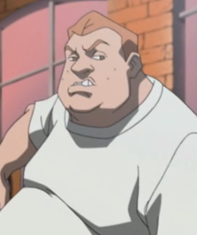 A bully who antagonizes Riley in "Shinin'", by stealing a chain necklace from him. Also cameos in "The Red Ball" (as part of the Woodcrest kickball team), and "A Date With the Booty Warrior" (as part of a group of other suspended students touring the prison). 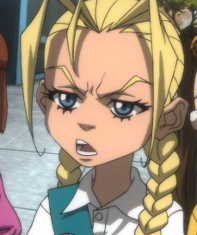 A little white girl obsessed with stereotypical black culture. In the comics, she tries to be friendly to Huey, but comes off as ignorant and annoying. In the show she becomes an exaggeration of herself, is more of a jerk, and befriends the like-minded Riley. 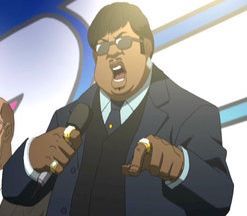 A black liberal activist who seems to be more interested in money and publicity, instead of actually advancing any causes. Appears in "The S-Word", "The Hunger Strike", and "The New Black".

A hapless teacher at Huey and Riley's school, who is woefully unequipped to interface with his new rush of black students. Huey and Jazmine's teacher in the comics, but Riley's teacher (for one episode) in the show: in both cases, he blunders through dealing with his students in ways that increasingly annoy them.