The main heroes of the game. Some of these characters are Doomed by Canon, while others are the much younger counterparts of characters in The Legend of Zelda: Breath of the Wild, whether they survived 100 years by natural or magical means. 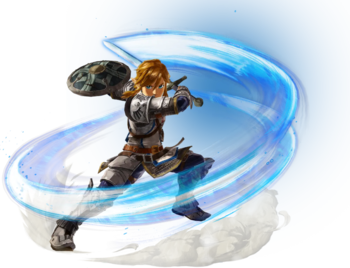 The Hylian Champion. A skilled swordsman famous for his fighting skills and courage, and he is the latest scion of a line of royal guardsmen that had served the royal family of Hyrule for generations. After driving back a massive horde of monsters, he becomes Zelda's personal knight on King Rhoam’s orders. With the Spirit of the Hero in him, he wields the Master Sword, to seal away the darkness of the Calamity. 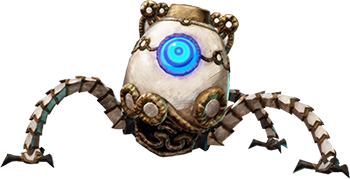 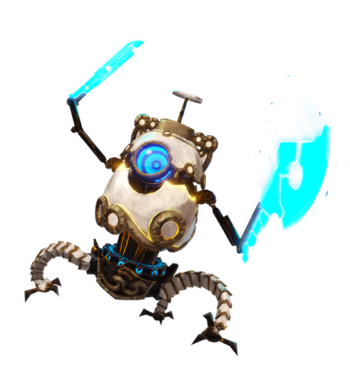 A small egg-shaped Guardian with the power to travel through time. Hailing from a future where Hyrule had fallen to Calamity Ganon, Terrako travels to the past to prevent the Great Calamity from happening.

Terrako's Unique Action is to fire lasers from its eye. It can fire a constant stream of laser shots or charge them to fire stronger lasers. Its Unique Action is strengthened by its Strong Attack, which allows it to summon two orbs on either side that will also fire lasers whenever it uses its Unique Action. Both of these can be used during its combo strings, giving Terrako some extra firepower to its attacks. 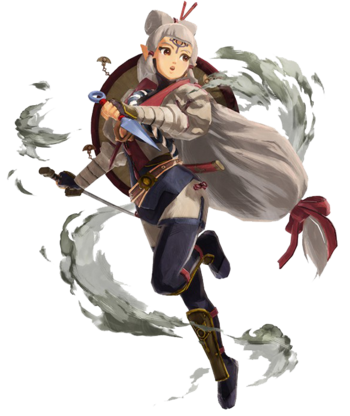 The royal advisor of Hyrule, a Sheikah warrior, and Zelda's friend. She fights alongside Link, Zelda, and the Champions against the Calamity.

Impa's unique action is to tag an enemy with a Sheikah symbol. By absorbing that symbol with a strong attack or otherwise killing the enemy, she is able to summon shadow clones that drastically increase her attack power and range.

She appears as an old woman in The Legend of Zelda: Breath of the Wild. For tropes on her original portrayal see here. 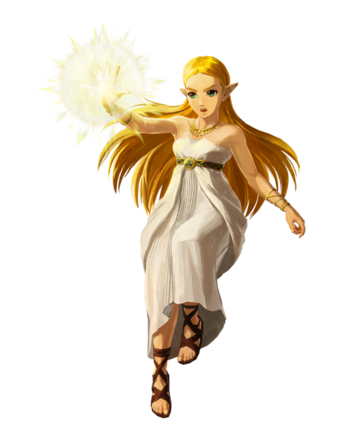 The Princess of Hyrule, who bears the Triforce and has the Blood and Soul of the Goddess Hylia. She's interested in intellectual pursuits and harnessing the power of ancient Sheikah, though her father is forcing her to unlock her latent magical powers instead.

For tropes on her portrayal in Breath of the Wild, see here. 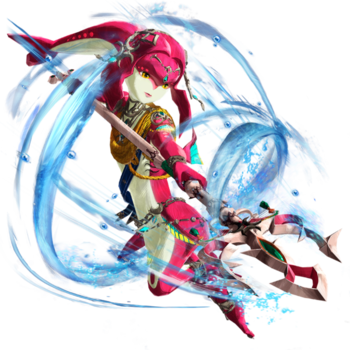 The Zora Champion and the princess of the Zora. She's known Link since he was a child.

Mipha's unique action is to teleport through the water fountains she places on the battlefield. She is also capable of healing herself and her allies through certain actions.

For tropes on her appearance in Breath of the Wild see here. 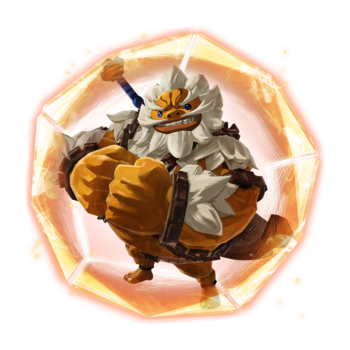 The Goron Champion, hailed as the Great Daruk. He's big and boisterous, but a great hero all the same.

Daruk's unique action is to destroy the magma ramps and pillars he places on the battlefield, which he can also roll and dash off of. 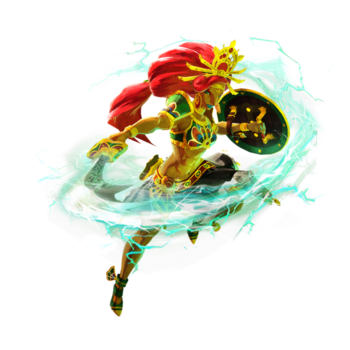 The Gerudo Champion and chieftain of the Gerudo. She's a close friend of Zelda's late mother.

Urbosa's unique action is to fill her lightning gauge, which allows her to extend her combos with powerful lighting strikes.

For tropes on her appearance in Breath of the Wild, see here. 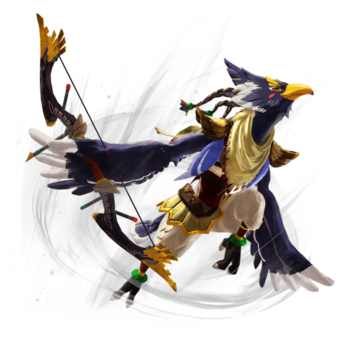 The Rito Champion, a prideful Rito warrior. Arrogant and haughty, but not without the skills to back it up.

Revali's unique action allows him to take flight using Revali's Gale. While airborne, he can use a variety of powerful attacks. 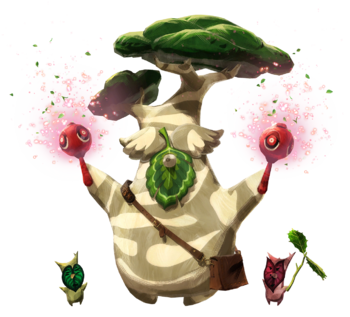 A colossal maraca-wielding Korok, whose music and dancing are rumored to have magical abilities.

Hestu's unique action summons Koroks to assist him on the battlefield.

For tropes on his original portrayal 100 years later, see here 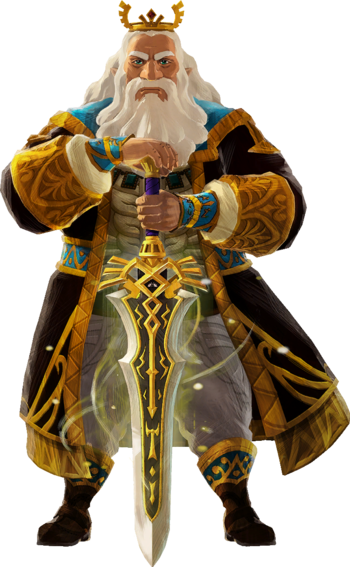 Zelda's father and the king of Hyrule.

King Rhoam's unique action is to switch between his strong but slow kingly form and his faster but weaker hermit disguise. Doing this during a strong attack will perform a follow-up strike in the process.

For tropes on his original portrayal 100 years later see here. 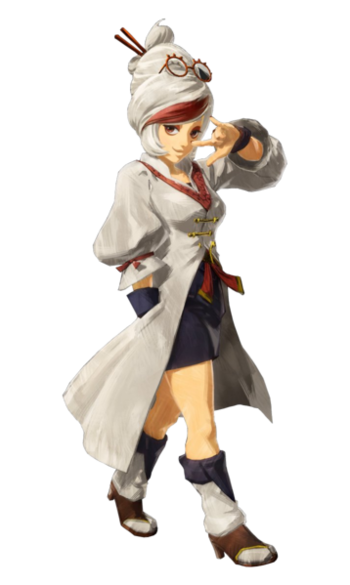 Impa's elder sister, a magitek researcher dedicated to reawakening the ancient technology of the Sheikah.

For tropes on her original portrayal 100 years later see here. 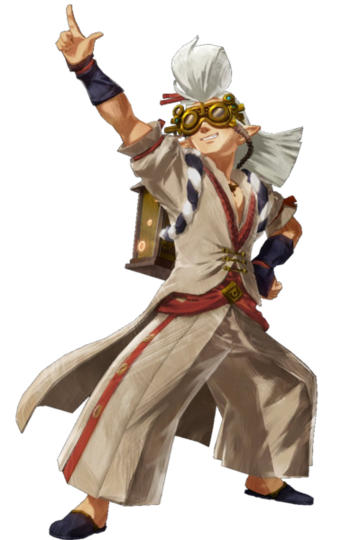 A Sheikah scientist and one of Purah's colleagues, who's set up home at the Akkala Ancient Tech Lab.

For tropes on his original portrayal 100 years later see here.

A group of four animal-themed giant robots built by the ancient Sheikah ages ago to battle Calamity Ganon, with one controlled by a representative champion from each of the four major non-Hylian races of Hyrule. Whilst they have unique differences and traits, all share the same basic three attacks; an elemental projectile attack, a ranged elemental attack, and a devastating energy beam blast that serves as their special attack. Most also have a melee attack.

Vah Ruta
An elephant-shaped Divine Beast with the power of water, associated with the Zora and piloted by Mipha. It launches alternating blasts of ice/freezing water as its primary attack and can lock onto multiple targets before releasing a barrage of homing ice darts as its area attack. Its melee attack is a ground-to-air vertical swing of its trunk.
Vah Rudania
A lizard-shaped Divine Beast with the power of fire and magma, associated with the Gorons and piloted by Daruk. It fires slow but explosive magma boulders for its primary attack, can create a shower of magma bombs with a swing of its tail for a secondary attack, and crush enemies underfoot with an enormous double-foot stomp.
Vah Naboris
A camel-shaped Divine Beast with the power of lightning, associated with the Gerudo and piloted by Urbosa. It can summon individual lightning blasts on opponents as a ranged attack, blast everything around it with lightning for its area attack, and make a devastating charge attack that tramples foes underfoot. Uniquely amongst the Divine Beasts, its basic ranged attack is a slow-moving ground-based targeting reticle, and it has an energy meter that provides power for both its ranged and area attacks; blasting away too casually will deplete gauge and leave it with no attacking ability other than its charge attack until it replenishes.
Vah Medoh
A bird-shaped Divine Beast associated with the Rito and piloted by Revali. It's armed with batteries of laser cannons along its upper and lower sides, allowing it to switch between air-to-air and air-to-ground modes in combat for better targeting.