Characters / The Legend of Zelda: Breath of the Wild: Champions

A page for the four Champions of Hyrule, their Divine Beasts, and their present-day "successors" in The Legend of Zelda: Breath of the Wild. For more combat tropes and their depiction in the prequel game, please see the Age of Calamity character page instead. 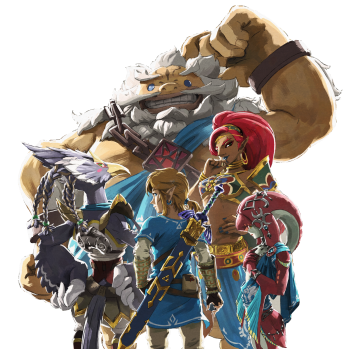 "With the princess as their commander, we dubbed these pilots Champions—a name that would solidify their unique bond."
"It was clear that we must follow our ancestors' path. We selected four skilled individuals from across Hyrule and tasked them with the duty of piloting the Divine Beasts."
— King Rhoam Bosphoramus Hyrule

A band of four mighty warriors who tried to oppose Calamity Ganon when he first awoke, using the power of four magitek Humongous Mecha known as the Divine Beasts. All of them perished in the attempt.

Tropes applying to the Champions as a whole: 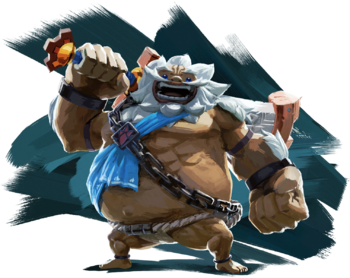 The Goron Champion, who piloted Vah Rudania, a massive, salamander-like Divine Beast and fought with a massive, blunt-edged weapon called the Boulder Breaker. 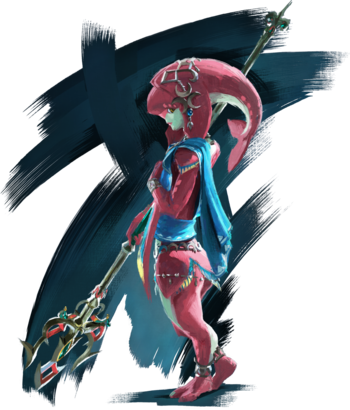 "If anyone ever tries to do you harm... then I will heal you."
Voiced by: Mayu Isshiki (Japanese), Amelia Gotham (English), Alondra Hidalgo (Mexican Spanish), Laura Monedero (European Spanish), Nora Jokhosha (German), Sabrina Bonfitto (Italian)

The Zora Champion, who piloted Vah Ruta, a gargantuan water-spraying elephant-shaped Divine Beast. Mipha was a talented user of healing magic, and in battle wielded her ornate Lightscale Trident. She was the daughter of King Dorephan, the sister of Prince Sidon, and a Childhood Friend of Link. 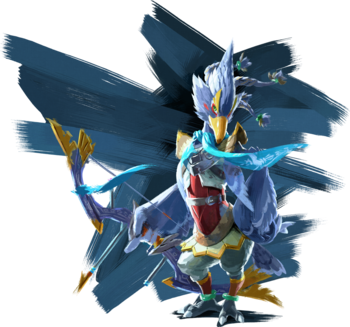 The Rito Champion, Revalia piloted Vah Medoh, an immense bird-like Divine Beast. Peerless in his use of his Great Eagle Bow, he was the greatest archer among the Rito. 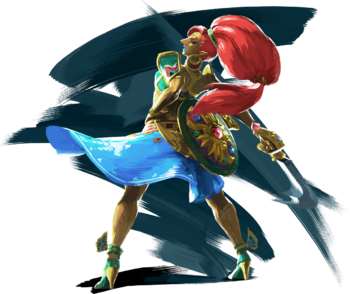 "The bitter essence of defeat from a century ago still sits upon my tongue... But that is now in the past..."
Voiced by: Rei Shimoda (Japanese), Elizabeth Maxwell (English), Kerygma Flores (Mexican Spanish), Marta Barbará (European Spanish), Cornelia Waibel (German), Patrizia Scianca (Italian)

The Gerudo Champion, who piloted Vah Naboris, a monstrous camel-shaped Divine Beast. Urbosa was a powerful lightning mage, and wielded the legendary Scimitar of the Seven alongside an ornate shield called Daybreaker. 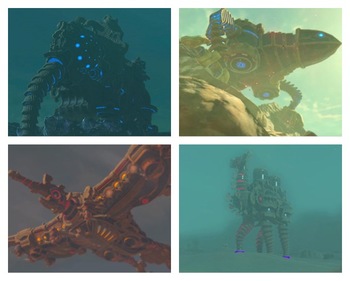 A quartet of tremendous animalistic robots that were unearthed alongside the Guardians over a century ago. The people of Hyrule hoped to use these mighty constructs to defend their realm against the prophesied return of Calamity Ganon, but, alas, it did not work out as planned. The four pilots of the Divine Beasts were known as the Champions. There’s also a fifth Divine Beast known as the Master Cycle Zero. It’s a smaller, motorcycle-esque machine designed as transportation for the appointed knight. 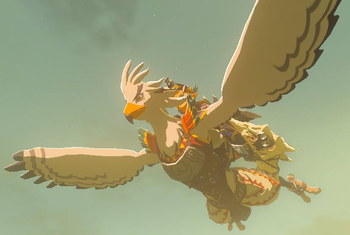 "As long as you're helping me bring down Medoh, your motivation is fine by me."
Voiced by: Sean Chiplock (English), Edson Matus (Mexican Spanish), Manuel Gimeno (European Spanish), Christian Zeiger (German)

A powerful warrior of the Rito tribe who wants to help stop the Divine Beast so his people can fly freely again after his previous attempt to do so with some other warriors failed. 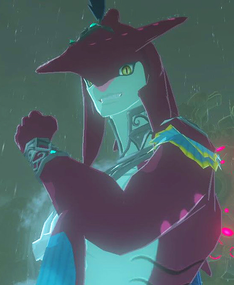 "Don't give up! I believe in you!"
Click here to see Sidon as a young child. 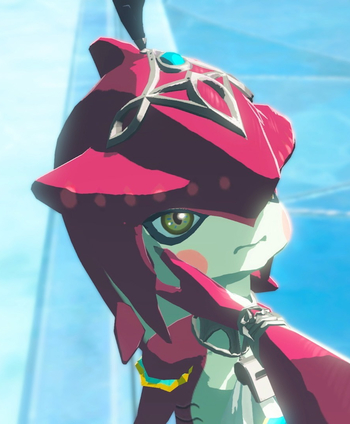 Voiced by: Kousuke Onishi (Japanese), Jamie Mortellaro (English), José Antonio Macías (Mexican Spanish), Sergio Mesa (European Spanish)
"I am a Zora Prince, after all. I have an eye for talent that is unparalleled!"

Princess Mipha's younger brother and the son of King Dorephan of the Zora. 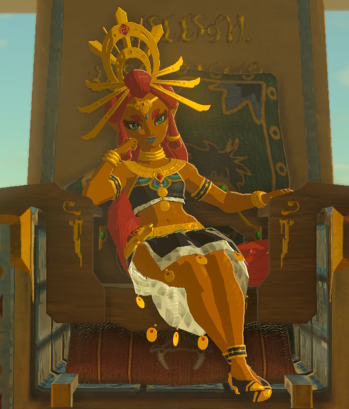 "I've tried so hard to be worthy of their love, to be a worthy chief... and to prove to myself that I was worthy, too."
Voiced by: Elizabeth Maxwell (English), Monserrat Mendoza González (Mexican Spanish), Joel Mulachs (European Spanish), Magdalena Turba (German)

The Gerudo Chief and descendant of the royal line. Although very young, Riju is a well-loved and capable ruler of her tribe. 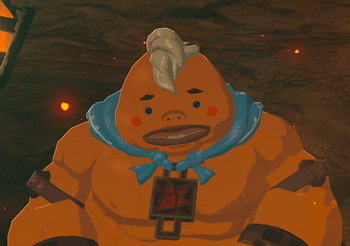 A young Goron who is descended from the Champion Daruk, and thus possesses his ancestor's protection power.