Characters / The Legend of Zelda: Breath of the Wild: Hylians and Sheikah

A page for the Hylians and the Sheikah, the two main humanoid races of The Legend of Zelda: Breath of the Wild.

The dominant race of humans that dwell in all parts of Hyrule running Stables in all provinces, but who live primarily in Hateno Village in West Necluda and Lurelin Village in Faron. 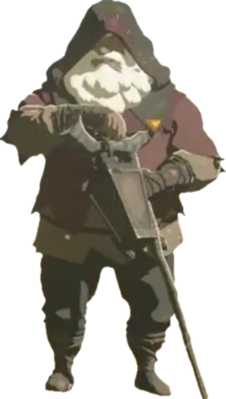 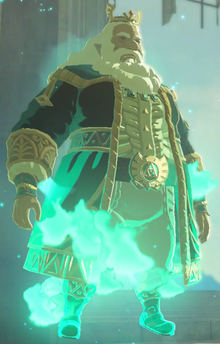 A mysterious elder who lives on the Great Plateau. He gives Link as much information as he can when the young hero first awakens, and seems to know a little more than what he lets on...

When Princess Zelda was a little girl, her mother filled the role of her teacher and encourager. The death of the queen would have a major impact on both her daughter and her husband.

Across the plains of Hyrule are 15 stables, massive tents set up with roofs designed to look like the head of a horse. At these locations, the workers will let Link register wild horses, take out registered horses, sleep in the beds, and provide provisions and quests. 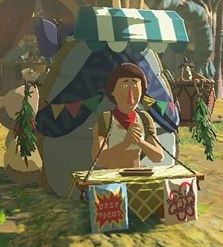 "The name's Beedle, but you can call me— Actually, let's just stick with Beedle."

A traveling merchant who can be found moving between stables peddling his wares. 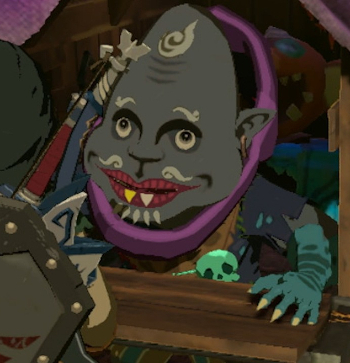 -Fang and Bone-
Come see ol' Kilton for the most monstrous deals in all of Hyrule!
"I just love the field of monster research so much that I decided to open a shop all about monsters!"

The eccentric and monster-obsessed owner of a travelling monster-themed shop called Fang and Bone. Initially found setting up his establishment in the middle of Skull Lake, he can subsequently be found near each of the villages at night.

A journalist for the "Rumor Mill" publication. Despite its somewhat tabloid-y nature, it actually contains plenty of useful hints about the surrounding area. While her writings can be found at most stables, the woman herself can be encountered in person in Gerudo Town.

A brother-and-sister duo that roams Hyrule in search of treasure.

A woman who has grown a flower garden around Hila Rao Shrine on the Floret Sandbar. She will get rather upset if you walk over or otherwise damage the flowers while trying to reach the Shrine. 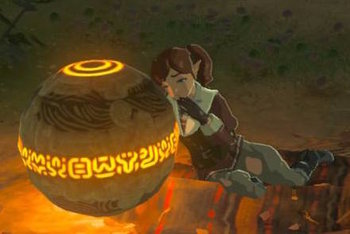 "You're so ancient and special, Roscoe! YES, YOU ARE!!"

A woman found on Puffer Beach with her "sweet Roscoe," actually a ball-shaped key to a shrine.

So yeah, hey, the name's Bozai. I'm 35, single, and I LOVE jogging. Especially on sand.

A young man who camps outside Gerudo Town, desperate for a girlfriend. He's the one who grants Link the snow boots and sand boots.

Wait a minute! Please, think about what you're doing! 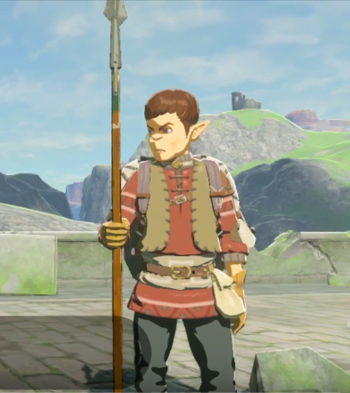 "I'll stay here and chat with you for a while, if you'd like."

A man with a spear that patrols the bridge near the Great Plateau alone, in order to keep it clear of monsters. 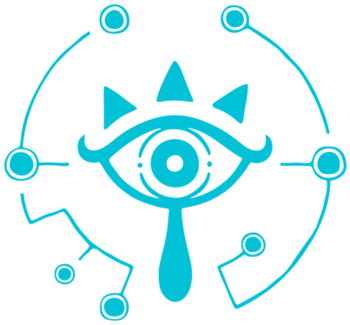 "We of the Sheikah tribe have long been heralded as a people of great wisdom. Our technology became the key to sealing Ganon away during the Great Calamity, some ten thousand years ago. At one point, our technology was praised as the power of the gods...but eventually the people turned on it. Turned on us. Our creations came to be viewed as a threat to the kingdom."
— Cado

A race of mystical pseudo-humans, of indeterminate connection to the Hylians, who have been friends to the Hylian people for generations. They hold one of the first major spots of civilization that Link encounters in the wasteland of Hyrule, in their mountainous village of Kakariko. 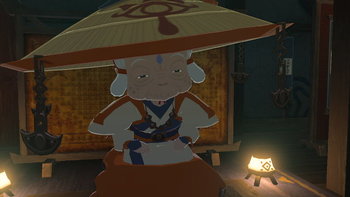 The elder of the Sheikah tribe, in her youth one hundred years ago, Impa was an adviser to the royal court of Hyrule. When Link was at death's door, it is Impa and her sister who sealed him within the Shrine of Resurrection under Zelda's orders. 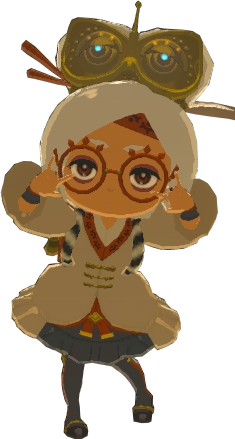 "SNAP!"
"You may already know this, but although Impa looks a looooot older than me, she's actually my little sister."
Voiced by: Kate Higgins (English), Lupita Leal (Mexican Spanish)

Impa's elder sister, a magitek researcher dedicated to reawakening the ancient technology of the Sheikah. Despite being chronologically older than Impa, a reverse-aging experiment has left her with the body of a little girl.

Purah's assistant who helps you with the camera based features of your Sheikah Slate. 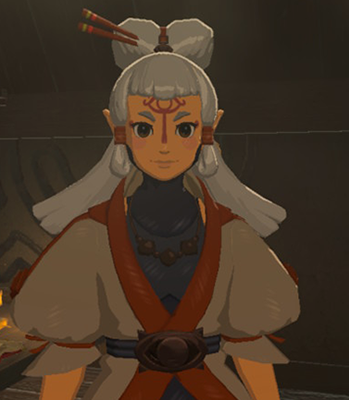 "Well... My name is Paya. Th-the reason I was named Paya is because I have a birthmark shaped like a papaya seed..."

Impa's granddaughter, she takes care of Impa's duties in her old age. 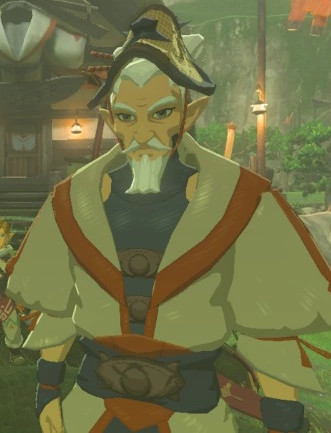 "Well, my wife left me today. The last thing she said to me was, 'What's more important, the Cuccos or me?!' I chose the Cuccos."

A Sheikah bodyguard of Impa's household. On his time off, he also tends to a flock of Cuccos and has become so obsessed with that it led to an estrangement with his wife and owner of the Curious Quiver, Rola. 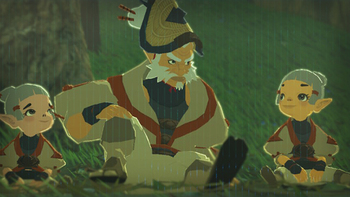 Dorian and his two daughters, Cottla and Koko

A Sheikah bodyguard of Impa's house. On his time off he also takes care of his two daughters by himself.

The two daughters of Dorian and his deceased wife. Cottla prefers to play games with Link and while Koko is learning how to cook for her family. 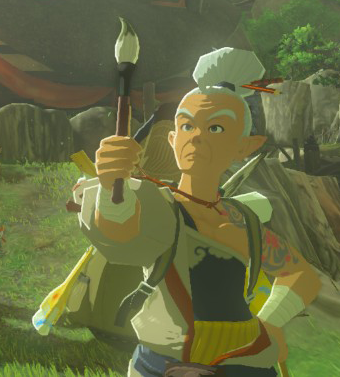 "I hear it's breathtakingly beautiful."
"As for me, I just looove art. In fact, I'm traveling in the world in search of beautiful landscapes."

A painter who's very well traveled; if you find the first Great Fairy Spring for him, he will help you find memory locations. 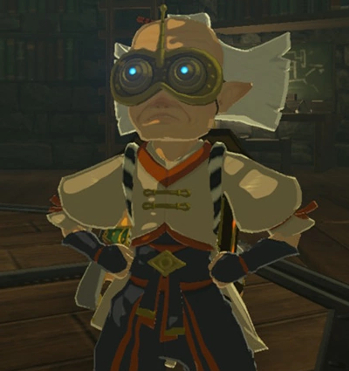 "I am the lead Guardian researcher and director of the Akkala Ancient Tech Lab. Doctooooor... Robbie!"

A Sheikah scientist, and one of Purah's colleagues, who's set up home at the Akkala Ancient Tech Lab. 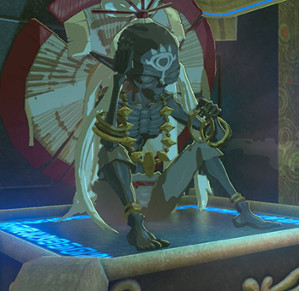 "May the Goddess smile upon you."

Sheikah monks serving the Goddess Hylia, entombed within the various shrines across Hyrule. 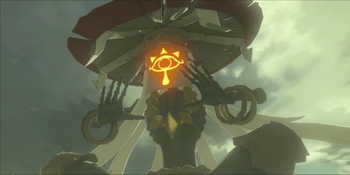 A powerful Sheikah monk who was entombed within the Final Trial. After giving Link a series of trials across Hyrule, he personally tests Link's mettle in a final duel to test if he is worthy of the Master Cycle Zero.

Kass's Teacher (Spoilers)
An unnamed Sheikah man who was a courtier around Zelda's age when the Great Calamity struck. He was in love with the Princess, but she only had eyes for Link, making the young Sheikah very jealous of the Hylian Champion. But Link's Heroic Sacrifice in defense of Zelda led to a change in attitude, and the Sheikah man spent the post-Calamity period collecting various songs about the previous hero from ten thousand years ago to help Link once the latter emerged from the Shrine of Resurrection. He managed to teach these songs to Kass before passing away.