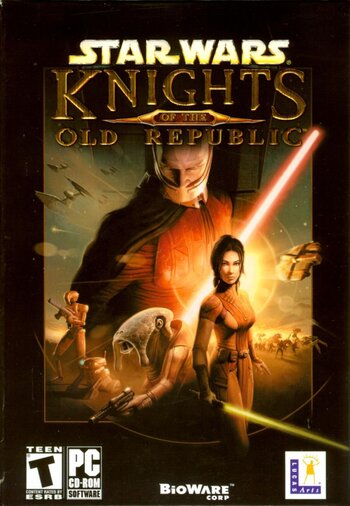 "What greater weapon is there than to turn an enemy to your cause? To use their own knowledge against them?"— Bastila Shan
Four thousand years before
the rise of the Galactic
Empire, the Republic verges
on collapse. DARTH MALAK,
last surviving apprentice of
the Dark Lord Revan, has
unleashed an invincible
Sith armada upon an
unsuspecting galaxy.

Crushing all resistance,
Malak's war of conquest
has left the Jedi Order
scattered and vulnerable
as countless Knights fall in
battle, and many more
swear allegiance to the new
Sith Master.

In the skies above the Outer
Rim world of Taris, a Jedi
battle fleet engages the
forces of Darth Malak in a
desperate effort to halt the
Sith's galactic domination....
Advertisement:

Star Wars: Knights of the Old Republic, is a 2003 RPG developed by BioWare, set in a familiar universe, four millennia (or, to be precise, 3,956 years) prior to the events of the film that started that all, Episode IV: A New Hope. Along with The Thrawn Trilogy, Star Wars: Clone Wars, and The Force Unleashed, it is one of the most famous installments of the Star Wars Legends continuity, as well as one of the biggest (at the time) exclusives for the original Xbox, along with the Halo series, Splinter Cell games, and Ninja Gaiden.

Taking heavy influence from the Tales of the Jedi comic series, it follows the story of an unremarkable, customizable Republic soldier who ends up on a doomed starship in the middle of a war between the noble Galactic Republic and the villainous Sith Empire, ruled by Dark Lord of the Sith Darth Malak. The events that follow, starting with a quest to rescue a Jedi with the powers of Battle Meditation, become the focus of both sides of the conflict and could tip the balance either way in the war. It eventually escalates to a confrontation between the protagonist and Darth Malak himself... and, after The Reveal, it gets personal.

Knights of the Old Republic included numerous tongue-in-cheek movie references and, like many Star Wars games, proudly averted The Problem with Licensed Games. Knights of the Old Republic would end up regarded by the gaming world as one of the best role-playing games of all time, and it's hard to find many Top Ten lists that don't give KotOR at least an honorary mention. It's certainly regarded as one of the very best Star Wars games, if not the best.

The plot was essentially Neverwinter Nights meets Baldur's Gate, but not enough to be classified as Recycled IN SPACE!. Bioware used the gameplay format used in KotOR for two of their following franchises, which gained equal fame: Dragon Age and Mass Effect. Mechanically the game uses a derivative of NWN's Aurora Engine, the Odyssey Engine, with NWN's Dungeons & Dragons-based gameplay adapted to the Star Wars d20 ruleset.

The game was also instrumental to solidifying the Xbox as a versatile console (though, like most "exclusives" for the original Xbox, it was also on the PC); before KotOR, the system had a distinct lack of role-playing games and was derisively called an "FPS Box" due to the inordinate number of shooters on it. Furthermore, KotOR (alongside Morrowind) heralded the new Multi-Platform era of the Western RPG genre, which had, until then, been mainly found on the PC. In 2013, it was even ported to the iPad and later to Android.

After years of rumors and speculation, at the PlayStation Showcase on September 9, 2021, it was finally confirmed that the game would be given an official remake — simply titled Star Wars: Knights of the Old Republic Remake — as a timed PS5 exclusive. It is thus far unknown if the remake will be integrated into the canon timeline or remain a part of the Legends continuity. As part of the announcement, it was confirmed that Jennifer Hale will reprise her role as Bastila Shan. Unfortunately in early August of 2022, the remake lost two of its creative directors in a company dispute and the remake is now on hold.

For those who are curious, the game's player character is canonically light-side male, although the player is free to choose the protagonist's gender and alignment for themselves in the game proper.

Also, if you see mentions of the planet Lehon on pages about this game, that's the Rakatan homeworld, only known as the Unknown World in-game. It was introduced in the game, but only named in a later novel (specifically, Darth Bane: Path of Destruction).

This one is strong in the tropes:

open/close all folders
Tropes A-H
Tropes I-P
Tropes Q-Z
Savior, conqueror, hero, villain. You are all things, Revan... and yet you are nothing. In the end, you belong to neither the light nor the darkness. You will forever stand alone.
Feedback