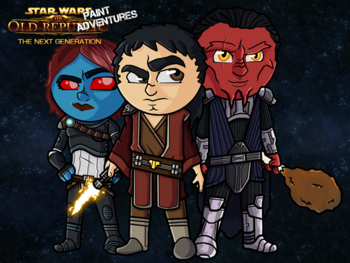 A lowbrow webcomic? In Star Wars? Who came up with this crap?
From left to right: Missy, Doop Skychafer, Darth Saber.
"For Fux's Sake!"
Advertisement:

An Interactive Comic adventure created by Lankist and later continued by Alamact on the Cantina forums. The original series lasted from 28th August 2010 to 5th December 2011. The next generation reboot started its run on 21st February 2016 and is currently on-going. It can be read here

It follows the humorous adventures of an Ensemble Cast featuring: Doop Skychafer, your standard brooding Anti-Hero with a troubled past (also the greediest Jedi Knight in existence); Darth Saber, the kindliest Sith Lord alive and, on occasion, an unintentional baddass; Missth'raw'nurudo (Missy), a buxom Chiss scientist with a superiority complex; Jun Bland, the yellow Mellow Fellow who wants to become Space James Bond yet fails spectacularly hard at it; and Standard Fett, the Mandalorian Jedi Master who lost his Padawan during the Battle of Coruscant and spends his days as a food aficionado frequenting restaurants in the Lower Levels. He is also most definitely not a pathological liar.

The original adventure, in contrast, followed a different Ensemble Cast whose final moments were covered in the Sequel via blatant and shameless flashbacks that sometimes may become Clip Shows because the original adventure was lost to the fickle tides of the Internet.

Oh, and there used to be a brief spin-off starring The Fluke, a rough-and-tumble Super Gullible Bounty Hunter from 25th February to 10th March 2012. Let's just say the hero of the spin-off had more screen time in the sequel than in his own adventure. According to the author, and what was previously hinted in Chapter 10, The Fluke is slated to make a notable reappearance in Act Two.

As of now, two Acts have been released for the webcomic: each intended to hold a complete set of twelve chapters, a prologue and an epilogue. The first Act, The Fallen Knights, ran from 21st February 2016 to 24th October 2016. The second Act, Legacy of the Force, was released after a brief hiatus on November 6th 2016. It broke tradition by having Darth Saber, instead of Doop Skychafer, be the protagonist to open the Act in the Prologue.

Yen-Zur, supposedly the last Chancellor of the Old Republic

The comic follows the new Star Wars canon, but utilizes and draws from elements of the Legends Era to construct its setting: the twilight years of the Old Republic.

After a lifetime of war unending, the Sith Empire and the Republic gather on the peaceful world of Alderaan to discuss the signing of a peace treaty and ceasefire. However, the greed of the Dark Council transcends common sense and the Sith launch an attack on Coruscant, the Republic's new capital and seat of the Jedi Temple, with the intent to reclaim their lost planet and shatter the leadership and morale of the Republic.

The defenders rally and hold out against the Sith forces long enough for the rest of the Republic's armada to return. With the Jedi Temple in ruins and a renewed conflict sparked in earnest, we follow our protagonists venture throughout a war-weary galaxy as the war begins to take a heavy toll on the collective health of the galaxy.