Characters / The King Of Fighters The Rugal Saga 04 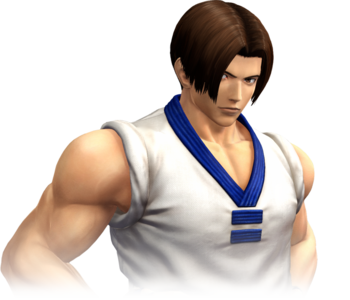 Profile
"Hey guys, how about it? Let's do the Tae Kwan Do thang!"
Voiced by: Satoshi Hashimoto ('94-XI), Kazuhiko Nagata (XII onward), Brett Beyer (Maximum Impact series, English), Hiroshi Isobe ('94 Dengeki Bunko drama CD), Kunihiro Kawamoto (The King of Fighters: Destiny)
Korean Taekwando master and arbiter of justice. He first showed up in Fatal Fury 2, and upon hearing that Terry Bogard was also invited to Krauser's tournament, declared Terry to be his rival and set out to beat him. Terry won, but the two have remained good friends since then. Kim is also a proud family man and has trained his sons Jae Hoon and Dong Hwan to be fine martial artists in their own right. Oh, and he Can't Hold His Liquor. At all. In XI, Choi and Chang convince Kim to enjoy himself, prompting him to take up Terry on his offer for joining that year's Fatal Fury Team. Impressed with his disciples' maturity, Kim believes that his first "rehabilitation" efforts have paid off and set his sights on two other villains from the past, Raiden and Hwa Jai.
In XIV, Kim rewarded Chang and Choi with a week break, but they did not return. Instead, he received a visit from his master Gang-Il and the latter's newest lover Luong, the two brought news that both Chang and Choi are seen hanging around with the legendary criminal Xanadu. Kim resolved to enter the tournament with Gang-Il and Luong in order to find out what happened to Chang and Choi. 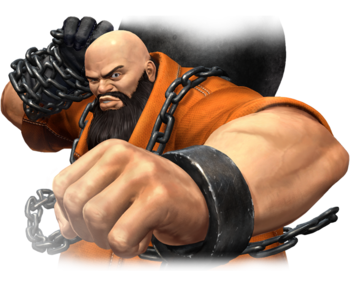 Profile
"A crushing victory! Eh, heh, heh, heh!"
Voiced by: Yoshinori Shima ('94-'95), Hiroyuki Arita ('96 onward, The King of Fighters: Destiny)
A Korean criminal who was busted by Kim following a bank robbery and strong-armed into Kim's reformatory program. He found a friend in Choi, and the two have vowed to go on a big crime spree once they can get away from Kim.
His big break came in XIV, when Kim gave him and Choi a week break, but they ended up causing chaos outside his surveilance and they were sent to prison, where they met Xanadu, whom they saw as a way to return to the roots of criminal and wash off Kim's training.
Choi Bounge - South Korea 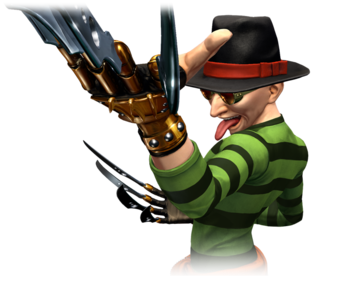 Profile
"A quick win. A quick victory. This time, I'm really free!"
Voiced by: Atsushi "Monster" Maezuka (games, The King of Fighters: Destiny)
A former serial killer who picked a fight with Kim Kaphwan, and subsequently got his ass handed to him. Instead of handing him over to the police, Kim decided to use him in an experimental "reformatory" program of his own, along with Chang Koehan. The two crooks became the best of friends, and they both anticipate the day they can escape Kim's watchful eye.
Like Chang, Choi got sent into prison in XIV during his one week break by Kim. Within the prison, they met 'the most evil criminal', Xanadu. He quickly roped them to join his entourage, with Choi hoping that he will be able to get back to his criminal roots and wash away any justice teachings he got from Kim. 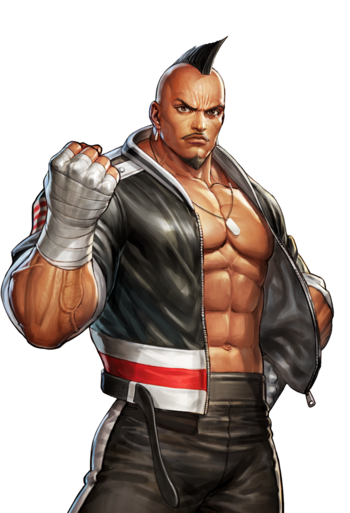 Profile
"Slow. Your attack's too slow. I read you like a storybook."
Voiced by: Toshikazu Nishimura (games), Takayuki Nakatsukasa (The King of Fighters: Destiny)
A bare-knuckle boxer who formed the USA Sports Team.
Lucky Glauber - USA 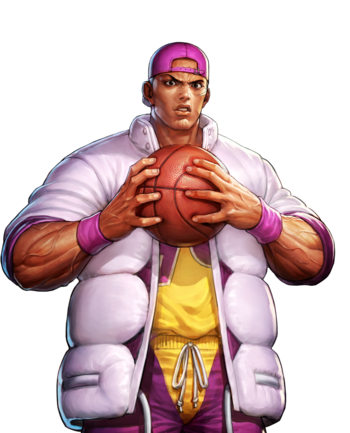 Profile
"Wake up! It's too early for bedtime!"
Voiced by: Kazuhiro "Kay" Inage (games), Haruo Yamagishi (The King of Fighters: Destiny)
Best friend of Heavy D! who uses basketballs in his own style of kung fu. Appears to be a L.A. Lakers fan, based on his colors (except if you pick him in another color scheme...). 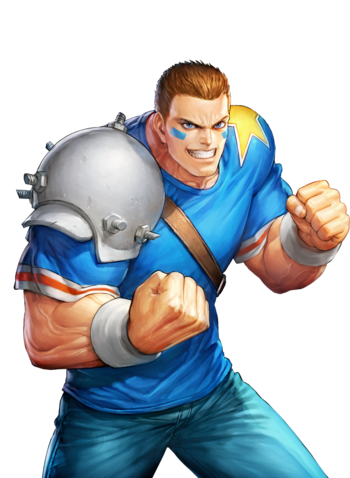 Profile
"Your defense means nothing. Nothing to my tackling, that is!"
Voiced by: Eiji Yano (games), Taro Kiuchi (The King of Fighters: Destiny)
An MVP-rated football player who was invited by Heavy D! to join the USA Sports Team in '94. After their loss, he left to return to his football career. Despite being invited back to various tournaments, he and his teammates always get beaten up and their invitations stolen by others, such as the New Faces Team in '97. 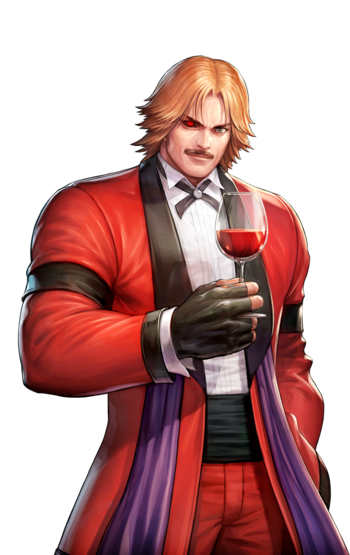 Profile
"Repeat this after me, I'll never take on a god again."
Voiced by: Toshimitsu Arai, Norio Wakamoto (2002), Banjo Ginga ('94 Dengeki Bunko drama CD), Tsuguo Mogami (The King of Fighters: Destiny)
Portrayed by: Ray Park (live-action movie)
The series' most infamous Big Bad. Rugal was one of the most feared people in the criminal underworld, not only with his silver tongue but with his fighting abilities as well. Not one single person had been able to defeat him, and those he deemed as Worthy Opponents were bathed in liquid metal and showcased as his "trophies". He decided to create the KOF tournament, so he can find some worthy opponents to battle. Before the tournament began, he faced Saisyu Kusanagi, the father of Kyo, and brutally maimed him, leaving him for dead. When he fought Team Japan in the finals, Rugal was defeated after taking down Daimon and Benimaru first. Unwilling to accept defeat, he blows up his aircraft carrier. He was believed dead but resurfaced in '95 under the pseudonym of "R." During this time, he brainwashes Saisyu (with Saisyu earning some... displeasure from Vice), and in the finals forces him to fight Kyo. After Saisyu is defeated and brought back to his senses, Rugal reveals a secret to the finalists: he has awakened his Orochi power, and promptly transforms into Omega Rugal, turning his hair silvery-white and his skin deathly grey, allowing him to nearly defeat Team Japan. Eventually however, he tries to use the full extent of his power, but cannot control it because he is not of Orochi blood. The power consumes him, and he dies. Chizuru reveals in '96 that Rugal received his Orochi power from Goenitz, who gouged his right eye out. Outside of the official storyline, he appears in every Dream Match game. In canon, he is succeeded by his son Adel and his daughter Rose.