Characters / The King Of Fighters The Rugal Saga 03 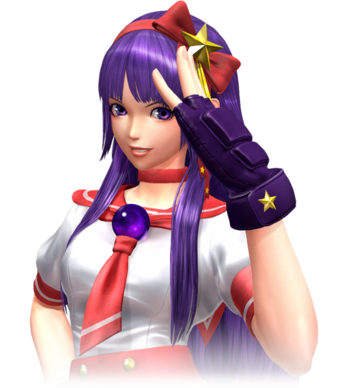 Profile
"Sorry about that! Are you hurt? I guess I got a bit carried away!"
Voiced by: Reiko Fukai ('94), Moe Nagasaki ('95), Tamao Satou ('96), Yukina Kurisu ('97, The King of Fighters: KYO), Haruna Ikezawa ('98 onward, The King of Fighters: Destiny), Robyn Gryphe (Maximum Impact, English), Lily Kong (Maximum Impact 2, English), Miwa Gardner (XII, English)
The star of Psycho Soldier and one of SNK’s mascots (a spot shared with Goddess Athena); Athena Asamiya is a bright and cheerful young girl who was born with Psychic Powers, dubbed in-verse as Psycho Powers, for she is a descendant of Goddess Athena and possibly her Reincarnation due no other member of the Asamiya Family ever possessing special powers before Athena.
For being a special girl Athena was taken in by Chin Gentsai as one of his disciples, initiating a team of fighters who are gifted with psychic powers, molding them to be prepared for any threat the world may face, to be defenders of justice; Athena has a strong sense of righteousness so she fits right in.
Athena’s trademark characteristic, that is being a Japanese Idol Singer, has its origin in ’97; Athena and Kensou’s charisma and notable prowess in martial arts has been earning them fans since ’94, but this rise in popularity made Chin become worried about his disciples losing their humble spirit and lose focus on being heroes, with that he tried to talk them off participating in the ’97 tournament, meanwhile Athena has received a letter from a fan, an ill-girl who wrote a heartwarming letter to the Psycho Soliders, saying they are her source of inspiration to overcome her illness, she hoped to see them again in action for the ’97 tournament.
Athena felt she had to answer such a devoted fan, she shows the letter to Chin, convincing him to follow his disciples and see how they take being popular and also being defenders of justice; Athena, Kensou and Chin didn’t win that tournament but still did great nevertheless, at the end the team is surprised by the visit of a wheelchair bound girl, she is Kaoru Watanabe the ill-girl who sent that letter prior the tournament, Kaoru introduces herself and congratulates Athena in doing well again at KOF, she says the team gave her strength to also fight hard, Kaoru gets up from the wheelchair trying to show her progress by walking, she stumbles but before falling Athena hurries to her side and supports Kaoru, with that Kaoru asks Athena if she could be their friend, Athena and the team gladly become friends with Kaoru.
Showing that at the end of ’97 made Chin reevaluate his students, thinking he was wrong about them, now feeling Athena and Kensou have their hearts in the right place; Athena tells her master that being popular and a good source of inspiration also is one way of helping others, with this Chin loses all his worries about his disciples losing their way. This eventually develops into Athena becoming an Idol, extremely popular and inspiring all, but still being a hero of course.
The other part of Athena’s character is being on the receiving end of Kensou’s long lasting romantic feelings, he tried to confess to Athena multiple times, sometimes succeeding in expressing himself (many) other times not, Athena’s reaction is mostly always the same, that is getting embarrassed and dodging an answer; while what she really feels about Kensou may not be love, she does think well of him as a great friend, always sticking with him.
In XIII during a conversation with the Women Fighters Team, upon seeing that Mai, Yuri and King all have a special someone in waiting, Athena hopes one day she will find her other half as well, Kensou immediately tries to say she already has him, Athena gets embarrassed and scolds Kensou, telling him not to say it in front of so many people.
In the CD Dramas from ’96 to ’99 it is shown that Athena has one-sided feelings for Kyo goes to great lengths to move to a place near the Kusanagi household. In other SNK media, Athena’s feelings for Kyo have never been shown, not even hinted in the games proper, raising a case towards its actual place in canon. 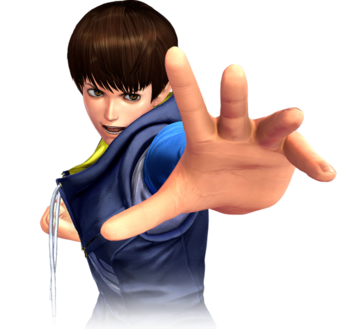 Profile
"New threads. New attitude. The new Kensou's coming at you!"
Voiced by: Eiji Yano (94' to XIII), Yuki Ishii (Athena: Awakening from the Ordinary Life), Yuto Kaname (XIV, The King of Fighters: Destiny), Josh Keller (XII, English)
The other half of the Psycho Soldiers main face, Sie Kensou is a lively young man born with Psychic Powers, referred to as Psycho Powers in-universe, for this reason he caught Chin Gentsai’s attention who then took him in to be his disciple; Chin believes his students must be honed to face any future threat the world may face, he uses the King of Fighters Tournaments as a mean to improve Kensou and the others.
Kensou is mainly the source of comic relief and relaxing moments for the Psycho Soldiers, however he has his own serious sub-plot that has been developing since 99; he is also in love with Athena, going to great lengths to confess his love and declare that he is her knight, however Athena seemly only sees Kensou as a friend, getting extremely embarrassed each time Kensou confesses.
In 99 Kensou mysteriously lost his powers, seemly destroying Chin’s hopes for his future, but Kensou still participated in that editon of KOF; at the end of it the powerless Kensou awakens an immense new power in desperation for Athena’s life was at risk, that power would be called the "Dragon Spirit" which Kensou somehow shares with Bao, meaning when Bao has powers Kensou doesn’t and vice-versa.
After some ins and outs with his powers Kensou decides to pass up the 2003 tournament in order to master the Dragon Spirit, eventually coming back in XI seemly having mastered his powers. In XII Kensou is graced with a complete overhaul in his fighting style, sporting a more serious kung-fu and donning his Classic Attire from his original Psycho Soldiers appearance, in XIII he is eager to show everyone how much capable he has become and try to confess to Athena once more of course.
The Dragon Spirit apparently is one of the greatest powers in the King of Fighters universe, Ron of Hizoku clan expressed great interest in taking it for himself, claiming that all of NESTS is nothing compared to said power, later he would even warn Saiki that the Dragon Spirit is something that could be a threat to Those From the Past.
Chin Gentsai - China 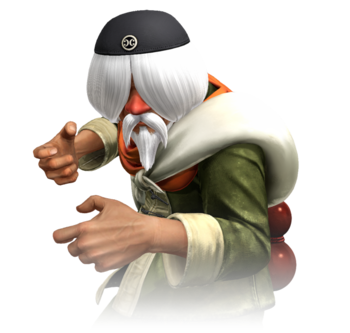 Profile
"O-Ouch! Whew! I can beat you. But age is something different!"
Voiced by: Toshikazu Nishimura ('94-2002), Matsuo Matsuo (XII - XIII), Shintaro Tanaka (XIV, The King of Fighters: Destiny), Josh Keller (XII, English)
Chinese Drunken Boxing master and founder of the Psycho Soldiers team. He enters the tournaments primarily to investigate the circumstances around them and prevent any evil plots from going too far. 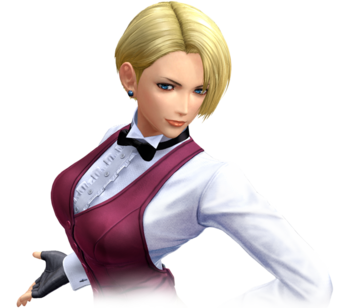 Profile
"In battle, one's sex means nothing. Who's left standing is what matters."
Voiced by: Harumi Ikoma (games, The King of Fighters: Destiny), Yumi Touma ('94 Dengeki Bunko drama CD)
A bartender who used to work for Mr. Big, but opened up her own place after his downfall. Skilled in Muay Thai, she disguised herself as a man to enter tournaments, as back then women were not allowed. She fights in the KOF tournaments to support her little brother Jean and to cover his medical expenses. Quite possibly the strongest Muay Thai practioner in the SNK 'verse next to Joe, he would later consider King a great rival to him.
Mai Shiranui - Japan 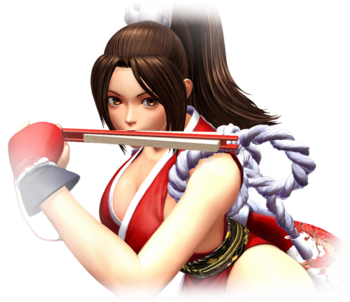 Profile
"With a body and strength like this, you thought you had a chance?"
Voiced by: Akoya Sogi ('94-XI), Ami Koshimizu (Sky Stage, XII onward, The King of Fighters: Destiny), Sheryl Stanley (Maximum Impact series, English), Megumi Hayashibara ('94 Dengeki Bunko drama CD)
Portrayed by: Maggie Q (live-action movie)
Mai is a very happy girl with the dream of several other girls: get married with her prince charming. She found that same Prince Charming in Andy, her childhood friend as well as her grandfather's disciple, and self-proclaimed herself his fiancé. Although her preppy fighting persona suggests otherwise, Mai is a traditional Japanese beauty and very proud of it. However, her pride as a Shiranui ninja and infatuation with Andy usually keep her from fitting the mold 100% of the time.
In XIV, Mai is pissed that Terry and Andy are teaming up with Joe, and is getting short of candidates for the Women Fighters team aside of King because she turned down other invitations (like Kasumi and Hinako) thinking that she'd be able to team up with Andy (she was too late), while the other candidates (Yuri, Mary and Vanessa) are busy with their own activities and jobs. Luckily for her, she quickly came across Alice Garnet Nakata, who proved her skills (even if it's a modified attacks of the Bogard brothers) and the Women Fighters Team rises again. 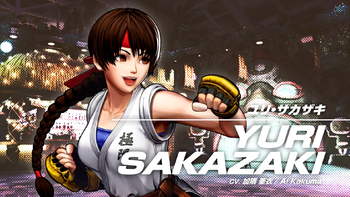 Profile
"I'm Kyokugen! Face it, Ryo! You're not fit to sweep for me!"
Voiced by: Kaori Horie ('95-XIII), Ai Kakuma (XIV onward, The King of Fighters: Destiny), Amy Walls (Maximum Impact series, English), Sakura Tange ('94 Dengeki Bunko drama CD)
Takuma's daughter and Ryo's younger sister. She was kidnapped in order for Mr. Big to use Takuma against Ryo and Robert, but after she was rescued by Ryo and Robert she trained with Takuma and started entering The King of Fighters tournaments, generally with King and Mai. However, in some installments she would switch teams, sometimes running with Robert and her family note ('96-'99, '01, '03, XI, XIV) and other times with Mai and Kingnote ('94-'95, '00, '02, XIII).