A neutral power based in the middle of Fódlan and the country's religious authority. They maintain peace around the continent by keeping the other three nations in check. They operate out of Garreg Mach Monastery where the Officers Academy is located and send out the Knights of Seiros to suppress bandit attacks & uprisings. 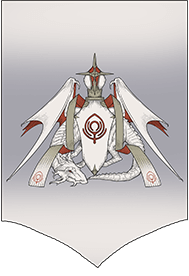 Class: Archbishop → Saint → The Immaculate One 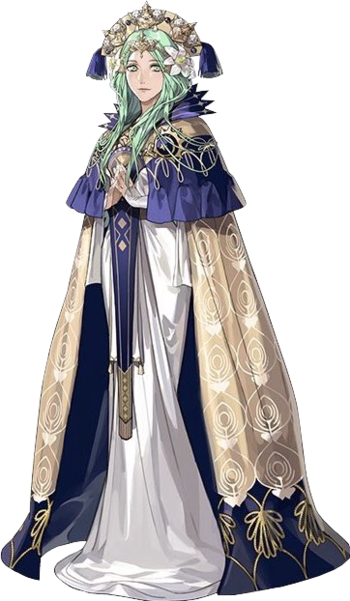 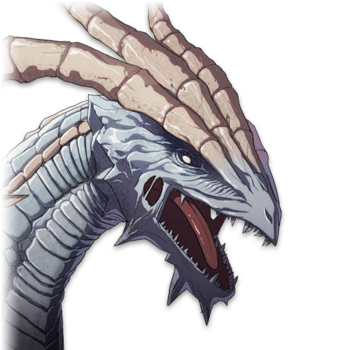 The current archbishop of the Church of Seiros, who has been serving since Jeralt's days in the knighthood. She connects with people like a calm, affectionate mother, but dispenses strict judgement upon enemies of the Church. 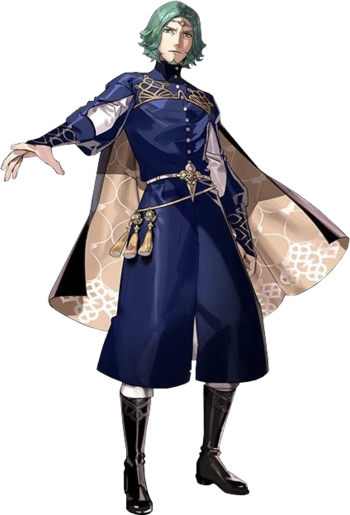 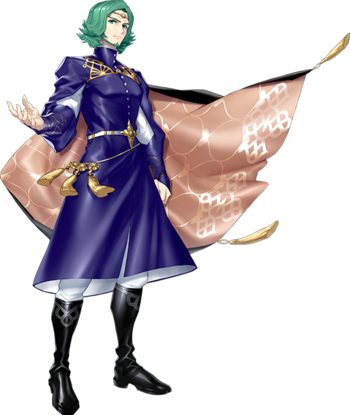 Ally of the Archbishop/Seiros Adherent
"Now that you are a member of the church, be sure to familiarize yourself with our teachings and traditions."

The aide to the archbishop of the Church of Seiros. He values order and discipline. He respects archbishop Rhea's judgment of the protagonist, who was invited to the Officers Academy as an exception, though he doesn't let his guard down around them either. He dotes on his little sister Flayn, thinking about her often, but can be a bit overprotective.

His personal ability, Guardian, boosts the damage of adjacent female allies during combat. He bears the Major Crest of Cichol, which has a chance to prevent enemy counterattacks while performing Combat Arts. 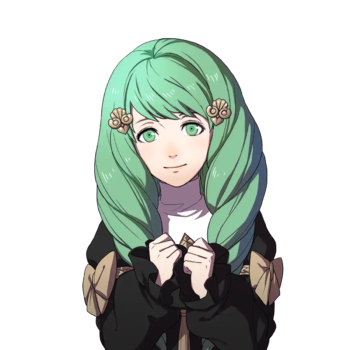 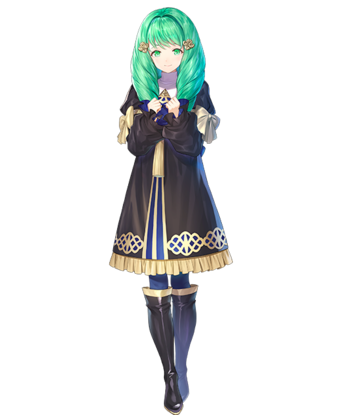 Slumbering Princess/Playing Innocent
"You recall how you helped me and allowed me to join your class, yes? I have learned a great many things since then. Indeed, I have truly grown so much! This personal growth is due, in large part, to you. And I wish to express my gratitute, sincerely."

The younger sister of Seteth. She resides at the Garreg Mach Monastery, but doesn't attend the Officers Academy. Flayn is usually a pretty calm person, but her inquisitive nature sometimes gets the better of her.

Her personal ability, Lily's Poise, reduces the damage taken by adjacent allies during combat. She bears the Major Crest of Cethleann, which has a chance to raise her Might while casting recovery magic. 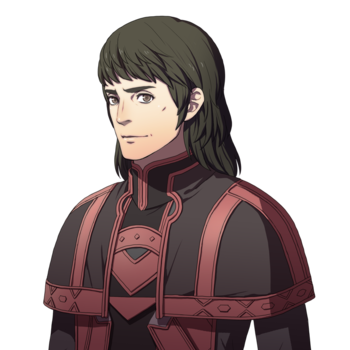 A man who oversees the Abyss under orders from the Church of Seiros. Saddened by the ruined state of the Abyss, full of hunger and crime, he managed to guide the people to some semblance of order that can be seen now. He is calm and forgiving, and despite their distaste for the Church, the people of Abyss tend to trust him. The creation of the Ashen Wolves was also his suggestion. 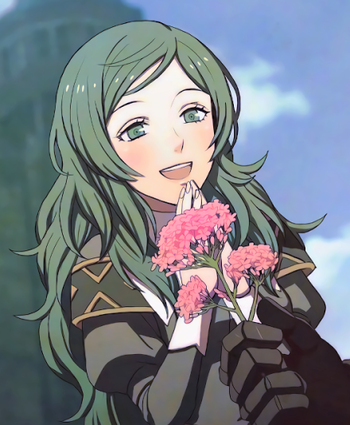 A former resident of Garreg Mach Monastery, Sitri is the mother of Byleth and wife of Jeralt who died 21 years before the start of Three Houses. 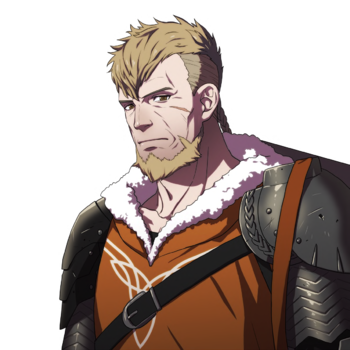 "I don't mind you settling into your life here, but don't let your guard down, ever."

A legendary figure who was considered the strongest knight in all of history. He was invited to the monastery alongside his child Byleth and was asked to rejoin the Knights of Seiros. He is Byleth's father and is the captain of a mercenary company. 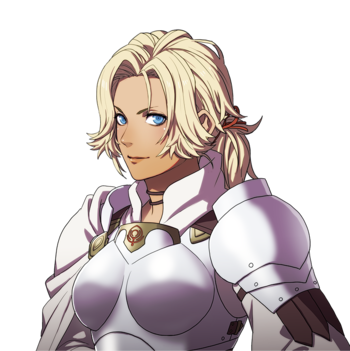 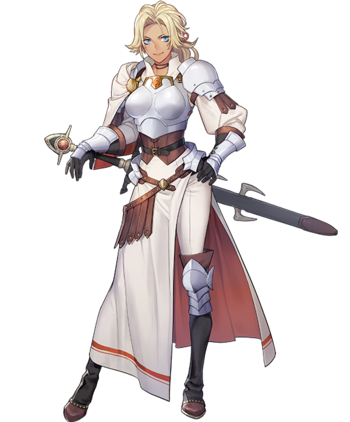 Guardian of Zanado/Free Knight/Thunder Knight
"Don't be a fool. You decide for yourself what's right and what's wrong. I believe Lady Rhea is right. So I won't allow anyone to bring her harm."

An alumnus of the Garreg Mach Officers Academy, and a member of the Knights of Seiros. She is a fearsome swordswoman armed with the Thunderbrand, one of the Hero's Relics, and is loyal to archbishop Rhea.

Her personal ability, Fighting Spirit, reduces damage she takes if she doesn't have an equipped battalion. She bears the Major Crest of Charon, which has a chance to increase her Might when using Combat Arts. 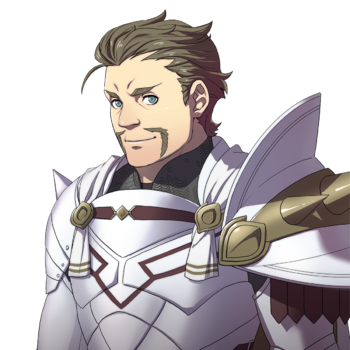 Sun of the Knights/Family Man
"Hello, Professor! You're really on the move today. A lot to get done, I take it? I'm happy to help. Tell me, is there anything I can do to lighten your load a bit?"

A member of the Knights of Seiros. He was once a subordinate of Jeralt when he was the leader of the knights, and thus respects him greatly. He recommended the protagonist as a teacher after they saved students from bandits, something he rarely does. He is a cheerful and amiable person. He likes telling jokes, but they're not that funny.

His personal ability, Compassion, allows him to Rally an ally's Luck. 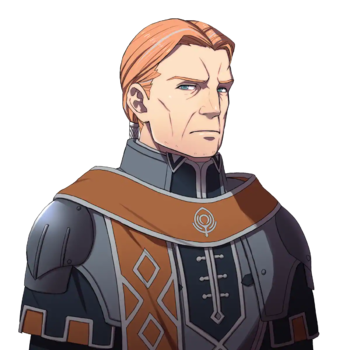 Veteran Patriot
"I do not deserve your praise. I merely performed my duties to the best of my skill."

A member of the Knights of Seiros hailing from the Holy Kingdom. He is deeply faithful, serious and polite. His expression doesn't change much, nor does he talk much about himself. Because of that, it's hard to get to know him, though he does seem to love fishing and cooking.

His personal ability, Veteran Knight, reduces damage he takes if he has a battalion deployed. 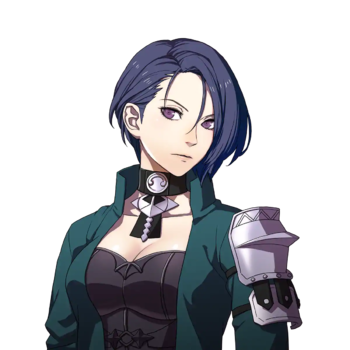 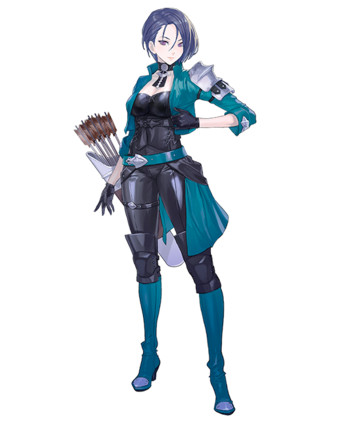 Distant Archer/Archer Apart
"I was living in my homeland of Dagda, up until the Imperial army destroyed it 10 years ago. But, being a mercenary, I have no real allegiance. That's why I'm working here now. Don't worry though. I don't plan to turn on you."

A master of the bow serving as a Knight of Seiros. She was once a mercenary from the land of Dagda, but joined the Knights to repay Rhea for past debts. She is not a believer of the Church of Seiros despite being a knight, which is a rarity, and she only pledges her loyalty to Rhea for now.

Her personal ability, Survival Instinct, grants her a temporary boost to Strength, Magic, Dexterity and Speed after attacking and killing an enemy.