The Kingdom of Verdane 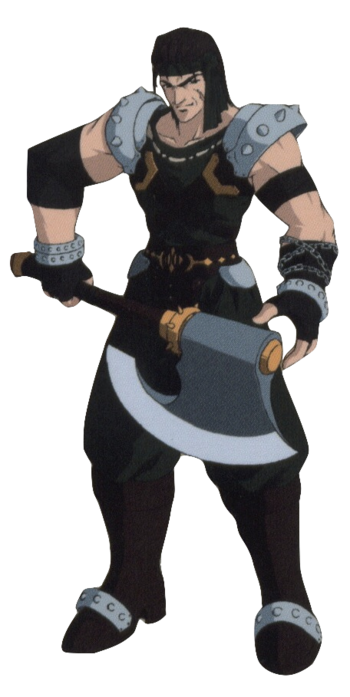 The eldest of King Batu's sons and the spearhead leader of the Verdane's invasion against Grannvale. He kidnapped Edain of Yngvi and retreated back to his castle in Marpha, intending to marry her.

One of King Batu's three sons and the ruler of Castle Genoa. He held Shannan hostage, forcing Ayra to fight for him until Shannan is saved by Sigurd.

The king of Verdane, who was deceived by the wicked Loptous cultist Sandima into declaring war on Grannvale.

One of Munnir's goons in the invasion of Grannvale. He guards Yngvi when Munnir ran off with Edain.

Another of Munnir's goons in the invasion of Grannvale. He guards Evans.

A mysterious woman who appears by the lake. She gives Lex the Brave Axe if he stands by the cliff with an Iron Axe. 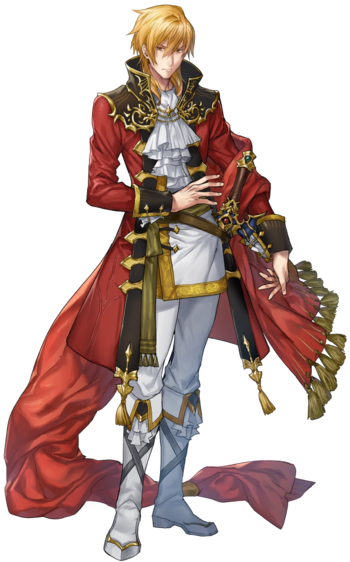 Lord of House Nordion and one of Sigurd's best friends. When Agustria went into civil war, he was imprisoned by the newly crowned king Chagall. He is the inheritor of the Demon Blade Mystletainn, and the father of Ares. 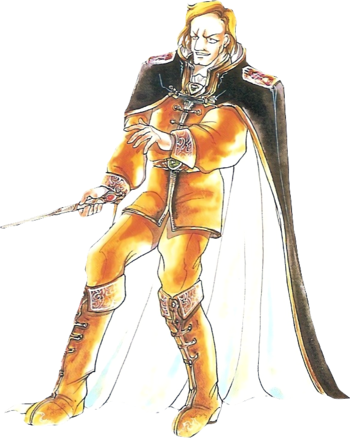 The new king of Agustria, who was manipulated by Manfroy to murder his father and take his throne.

Three members of the Cross Knights who are the escorts to Princess Lachesis while Eldigan was away to meet with Chagall. Eve is the father of Tristan and Janne.

Son of Boldor. He tried to take Evans Castle in Chapter 1, only to be stopped by Eldigan and the Cross Knights. He returns in Chapter 2, where he attempts to take Nordion.

A general of Heirhein who leads a defensive line, preventing anyone from reaching Heirhein.

Lord of Heirhein and father of Elliot. He orders Elliot to take Nordion to take revenge for being humiliated by Eldigan.

A greedy lord of Anphony. He sent bandits to pillage the villages nearby and hired Beowulf and Voltz to fight against Sigurd's army.

A mercenary captain leading a squad of Free Knights hired by Macbeth, and a close friend of Beowulf's.

Lord of Mackily. Clever and cautious, he was neutral toward Sigurd's army until Anphony was taken.

A commander of the cavalry in Agusty.

A mercenary hired by Chagall, who was ordered to watch over Madino.

The king of Agustria before the events of Chapter 2. He was murdered by his own son, Chagall.

The wife of Eldigan and the mother of Ares. Hailing from Leonster, she and Ares leave under Eldigan's orders when Agustria went into civil war. She was later killed by the invading Grannvale forces.

Member of the Orgahill Pirates. Annoyed by Brigid's stance against pillaging, he led a bunch of pirates to raid behind her back and later declared mutiny on her.

Member of the Orgahill Pirates. He supports Dobarl's mutiny and leads a group of pirates to pillage Agustria. 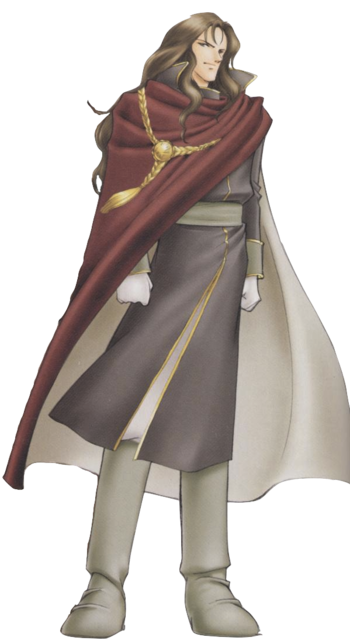 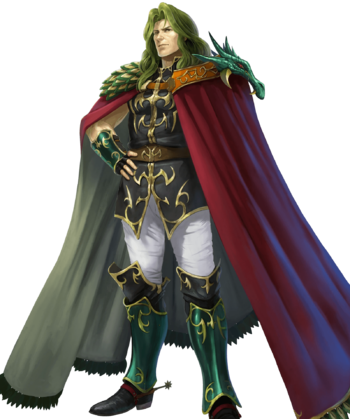 The king of Thracia who desired a strong future of Thracia. He is willing to commit any crimes to do so, including the infamous Yied Massacre and the invasion of Leonster.

The son of King Travant and the inheritor of the Gungnir.

A leader of the group of Thracian knights in Agustria.

One of the Thracian knights who accompanied Travant in the Yied Massacre. He leads the remaining forces to attack Sigurd's group when Travant left with Altena and the Gaé Bolg.

A Thracian knight who was ordered by Travant to retake Manster.

A general in charge of defending Mease from Seliph's army.

A general in charge of defending Kapathogia while Hannibal led the attack.

The general in charge of Luthecia. He is entrusted by Travant to watch over Coirpre/Charlot to prevent Hannibal from rebelling.

The queen of Silesse and the mother of Lewyn. 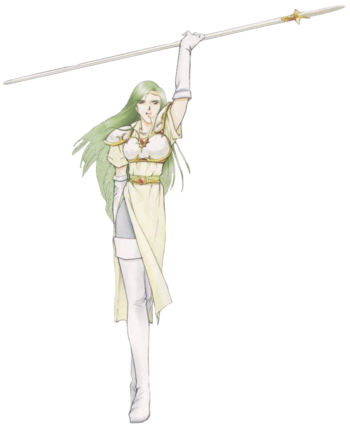 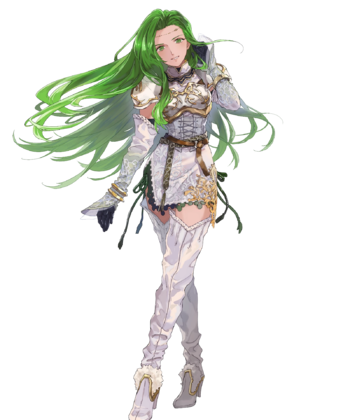 Leader of the Four Heavenly Knights of Silesse and the older sister of Erinys. 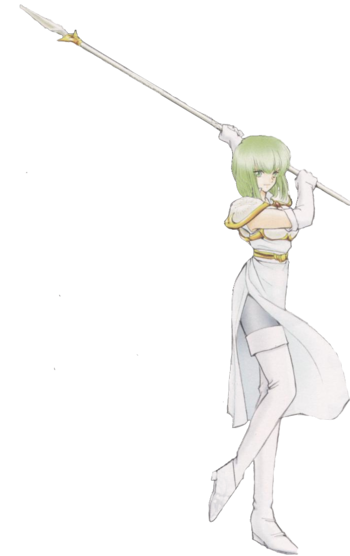 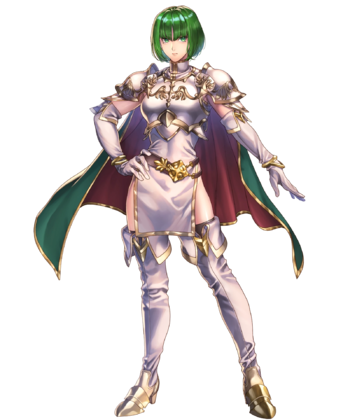 One of the Four Heavenly Knights of Silesse who supports Myos in his rebellion. She is the mother of Misha in Thracia 776.

A bishop under Myos's command who leads a squad of wind mages.

Lewyn's uncle and the leader of Zaxon. He led the rebellion to claim the throne of Silesse.

One of the Four Heavenly Knights of Silesse under Daccar's command. She led a charge to Sailane and later to reclaim Tófa.

A general under Daccar, who was sent to occupy Sailane.

A mercenary hired by Daccar. She leads a group of strong female warriors. 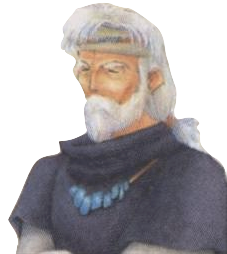 Holy blood:note not a playable character, but it'll be mentioned for story reasons Od [Major]

The king of Isaach and the father of Marricle and Ayra.

Holy blood:note not a playable character, but it'll be mentioned for story reasons Od [Major]

The son of King Mannanan and the father of Shannan.

Holy blood:note not a playable character, but it'll be mentioned for story reasons Naga [Major]

The old king of Grannvale and the inheritor of the Naga blood. He is the father of Kurth, who appointed him in charge of the country due to his old age.

Holy blood:note not a playable character, but it'll be mentioned for story reasons Naga [Major]

The Prince of Grannvale given authority by his father. He led the Grannvale army against the Kingdom of Isaach.

A messenger under King Azmur.

The duke of Chalphy and the father of Sigurd and Ethlyn. A renowned war hero and trusted adviser to the young Prince Kurth, he accompanied him in the war against Isaach.

A former attendee to Sigurd. He was ordered by Arvis to take the children and the Tyrfing from the cultists. He gives the Tyrfing to Seliph.

Holy blood:note not a playable character, but it'll be mentioned for story reasons Ulir [Major]

Duke of Yngvi and the father of Brigid, Edain, and Andrei. He was one of Kurth's trusted advisers. He was killed by his own son, Andrei.

The only son of Duke Ring of Yngvi and younger brother of Brigid and Edain. He killed him in order to take control over Yngvi.

The son of Lord Andrei. He sought to avenge his father's death by attacking Seliph's army. He holds hatred towards his cousins, who he sees as traitors to House Yngvi. 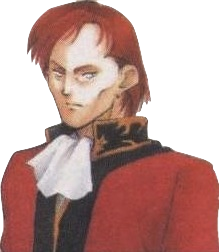 Holy blood:note not a playable character, but it'll be mentioned for story reasons Fjalar [Major]

The former duke of Velthomer and the father of Arvis and Azelle. Known for having many affairs, despite having a wife: Cigyun. He committed suicide after finding out that she had an affair with Prince Kurth. 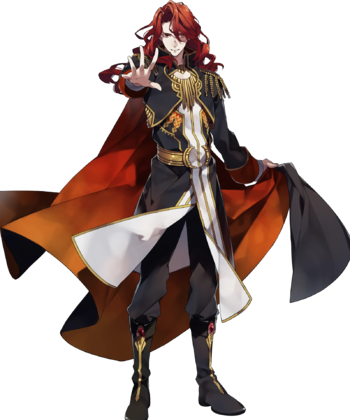 The duke of Velthomer and the captain of the Royal Guard. Given the title of duke after his father's death, he is a cunning and calculative man. He desires a world free of corruption and prejudice, though his encounter with the dark cult changed the continent forever... 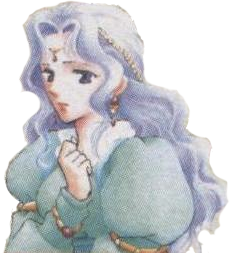 Holy blood:note not a playable character, but it'll be mentioned for story reasons Loptous [Minor]

A young woman from the Spirit Forest. She had broken the village's law and left to see the world.

One of Arvis's soldiers in charge of watching Phinora against Sigurd's march through the desert.

One of Arvis's closest confidants and one of the leaders of the Roten Ritter, Veltomer's elite troops.

A former attendee to Arvis. He was trusted to protect the children from the child hunts with aid of Ishtar. He is also informed that a special key is needed to open the treasure room holding the Book of Naga. 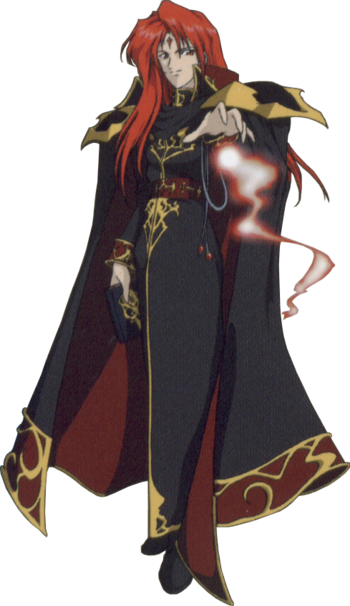 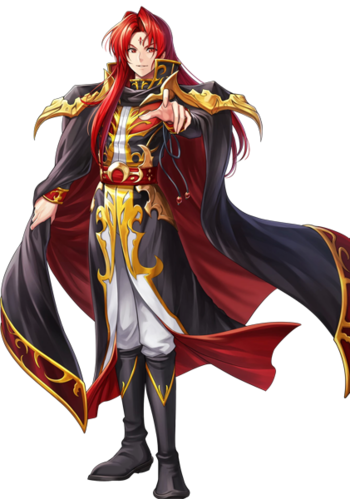 The son of Emperor Arvis and the vessel to the dark dragon Loptous. 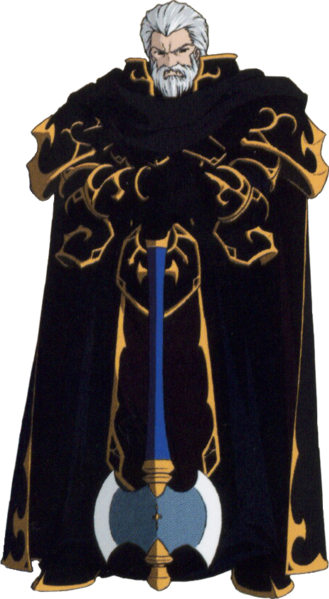 A greedy lord of Dozel and the father of Danann and Lex. He joined Reptor's coalition opposing the Prince's authority. He killed Prince Kurth and framed Sigurd and Byron for his death. 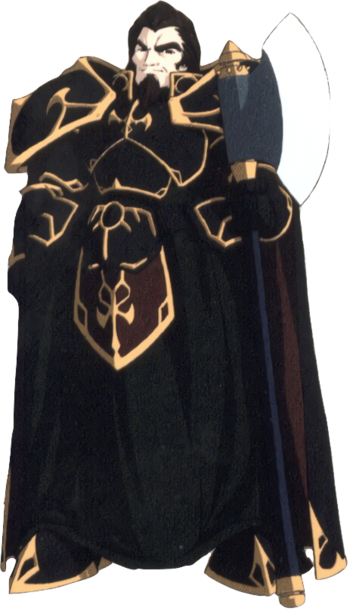 The son of Duke Lombard and the father of Brian, Iuchar, and Iucharba. He was appointed King of Isaach when the Grannvale Empire placed an occupation force in the kingdom.

The son of Duke Danann and the inheritor of the Helswath. He rules over Castle Dozel while the rest of his family are stationed in the occupation of Isaach.

A general of Dozel under Lord Lombard's command. He was sent to finish off Byron.

One of Danann's generals, who leads an army of Axe Knights after Iuchar or Iucharba defected or were defeated. 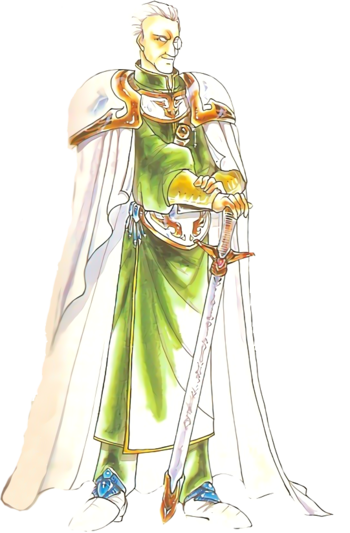 The duke of Friege, Prime Minister of Grannvale, and the father of Bloom, Tailtiu, and Ethnia. He leads a coalition opposing the Prince's authority and later conspired with Lombard in obtaining power over Grannvale. 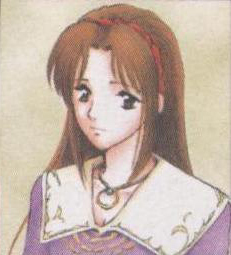 Holy blood:note not a playable character, but it'll be mentioned for story reasons Thrud [Minor]

The youngest daughter of Reptor and the sister of Tailtiu. She is the mother of Amid and Linda. She joined Sigurd's army if her sister died and took the abuse from Hilda.

Son of Duke Reptor and the brother of Tailtiu. He was appointed in the occupation of the Manster District. He is married to Hilda and the father of Ishtore and Ishtar.

Class: Queen
Holy blood:note not a playable character, but it'll be mentioned for story reasons Fjalar [Minor] (It's listed as Dáinn [Major] in the last chapter, but this is due to a glitch)

The wife of Duke Bloom and the mother of Ishtore and Ishtar and sister-in-law to Tailtiu and Ethnia. She was in charge of the occupation force in the Miletos District. 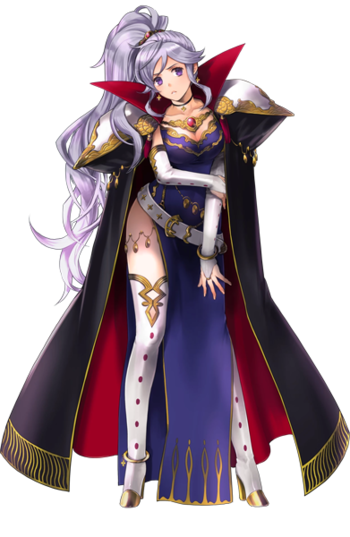 Daughter of Bloom and the "Goddess of Thunder." Inheritor of the Mjolnir, she is in love with the Prince of Grannvale, Julius.

The son of Bloom who was in charge of defending Melgen along with his lover Liza.

The trio of mages in the Manster occupation force.

A cruel general who leads the charge to retake Alster.

A general who leads the charge to retake Leonster.

An officer in the Miletos District. He was sent forth to execute the children that escaped the child hunts.

The trio of Falcon Knights in Grannvale. They accompanied Ishtar in the charge against Seliph's army.

A mercenary hired by Rodan to retake Chalphy from Seliph.

A warrior in charge of defending Edda.

A bishop who was ordered to retake Chalphy from Seliph.

A former merchant who became a leader of Darna under Bloom's rule.

A leader of the mercenary group hired by Bramsel. He found and raised Ares when he was young.

A Mage Knight who was ordered to reinforce Thracia to fight against Seliph's army.