A house composed of students from the Leicester Alliance led by Claude. 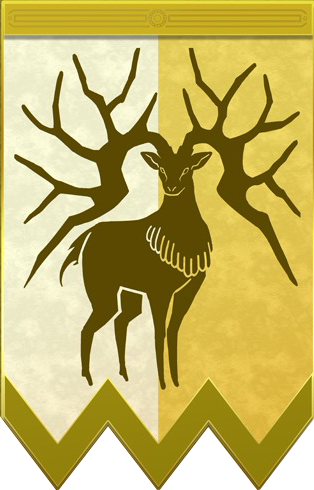 Golden Deer's Banner
"You, me, Golden Deer? We could be great together."
— Claude introducing the Golden Deer

Tropes Associated with the Golden Deer 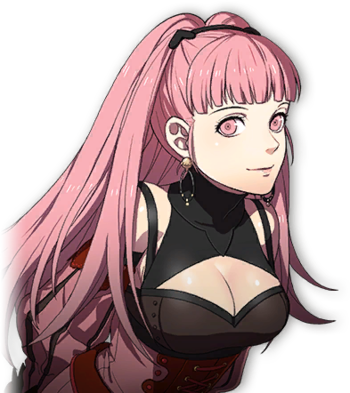 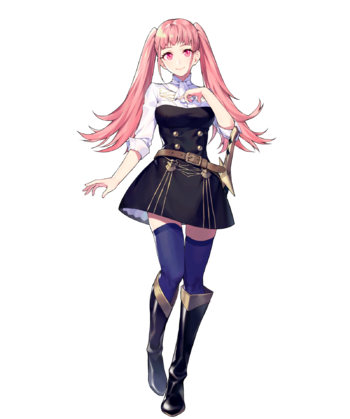 Free Spirit / Idle Maiden
"Keep me off the battlefield, and maybe I won't tell everyone you were daydreaming."

The spoiled yet sweet daughter of the Duke of Goneril. She has a habit of slacking off and is good at charming people. She has a fondness for beautiful and fashionable things.

Her personal ability, Advocate, increases the damage of any adjacent male ally in combat. She bears the Minor Crest of Goneril, which gives her a chance to prevent enemy counterattacks while using Combat Arts. 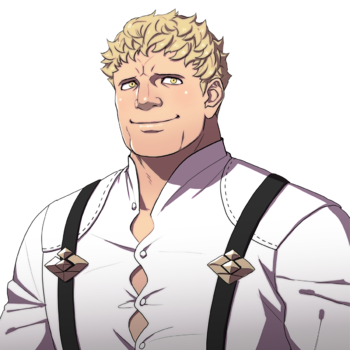 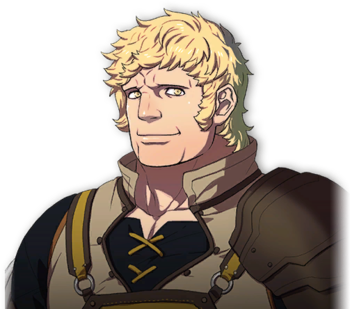 Beast of Leicester
"Are you really as strong as they say? Let's see your biceps! I bet I packed more muscle than you!"

The son of a Leicester merchant family. His parents passed away in an unfortunate accident, but he remains optimistic and is devoted to the cafeteria menu and training to become a knight. He dislikes lectures, instead preferring to build up his muscles.

His personal ability, Goody Basket, has a chance of healing some of his health at the start of the turn. 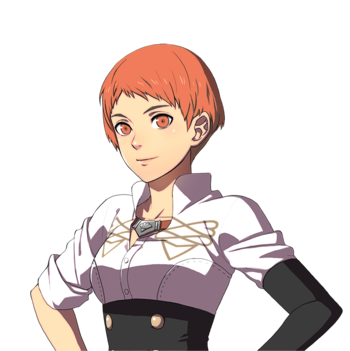 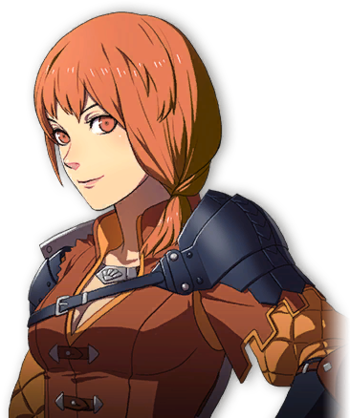 The Blade Breaker II
"I'm Captain Jeralt's first and best apprentice. I can beat anyone, Professor. Even you, if I have to. It may only have been for a short time, but I learned from the absolute best."

The daughter of a hunter, hailing from a village called Sauin within the Alliance. To become a mercenary and make money, she borrowed money from her village to enroll in the Officers Academy. To repay her gratitude and debt to her fellow villagers, she trains hard every day and lives modestly. She calls Jeralt her master, as he inspired her to be a mercenary, and calls herself his top disciple.

Her personal ability, Rivalry, increases her damage and reduces her damage taken when adjacent to a male ally. 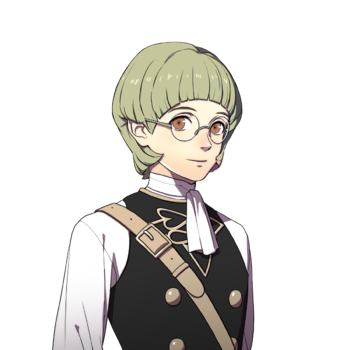 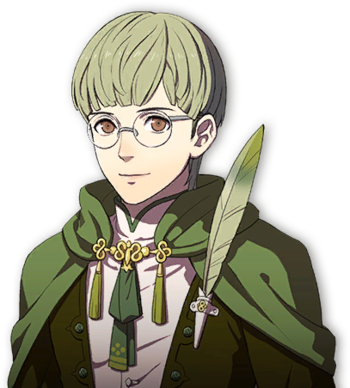 Worldly Artist
"Well, I've thought for a while that it might be nice to paint the scenery here. The contours of that tree, set against the stark shapes of the faraway peaks... Of course, I only paint after I've finished my chores. I'd never put my art before my responsibilities!"

The second son of a merchant family in the Leicester Alliance. Since his brother is inheriting the family business, he entered the Officers Academy aiming to be a knight with the support of his parents, but it seems there might be something else he'd rather do deep down inside. He is a kind boy, who loves the beauty of nature and art. 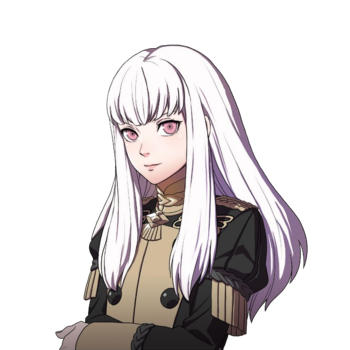 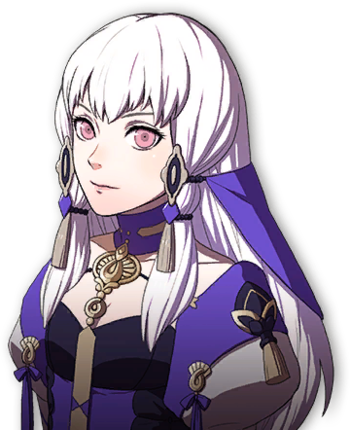 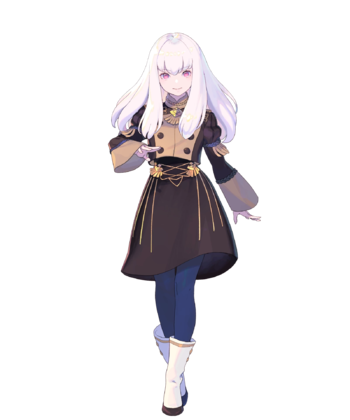 Scholar of Misfortune / Child Prodigy
"It is because I am the only child of House Ordelia. I must do all I can for the family name. I'm determined to someday be of real value to them, and that day must come soon. I can't waste any time. I don't have much of it left..."

The only child of Duke Ordelia. She’s the academy’s youngest student and something of a magical prodigy. Despite developing her talents at a young age, she's a hard worker and isn't conceited about her abilities. However, she hates being treated as a child and doesn't like ghosts. 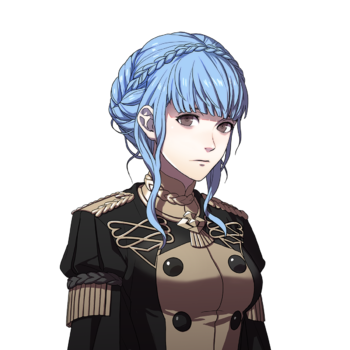 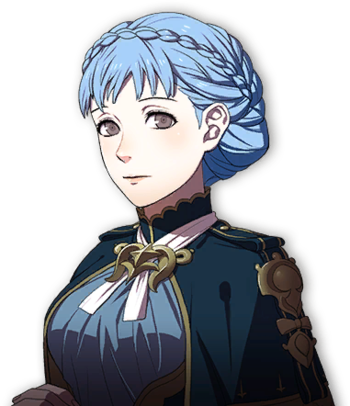 Survivor of the Curse
"Goddess, I ask of you... please protect us..."

The foster daughter of the house of Margrave Edmund in a remote territory. Since she doesn't interact with others much, there are many who haven't even heard her voice before. At the same time, she loves birds and animals, opening her heart to them and talking to them. She is deeply religious, and prays to the Goddess every day.

Her personal ability, Animal Friend, restores her health if she starts the turn next to a mounted or flying ally. She has a Minor Crest of unknown origin called "The Beast," which is said to promise contempt for those who bear it. It has a chance to raise her Might when using weapons. 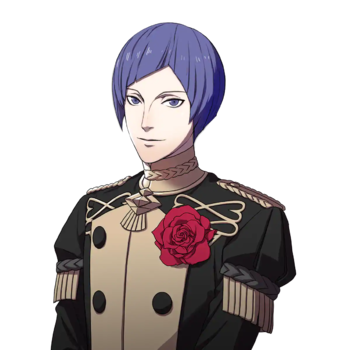 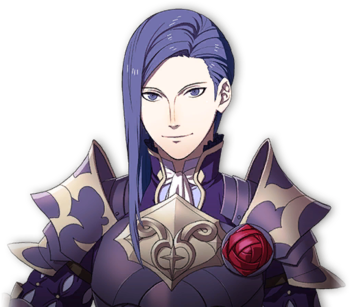 Noble of the Red Rose
"We've much to discuss. But first, let us dispense with the riffraff. It is a noble's duty after all."

The eldest son of the house of Count Gloucester. Despite his snobby demeanor, he is quite serious, fully understanding of his responsibilities as as a noble. It seems he has been approaching girls at the monastery, to little success.

His personal ability, Distinguished House, increases his damage dealt if he has a battalion deployed. He bears the Minor Crest of Gloucester, which has a chance to raise his Might while using magic.