A house composed of students from the Holy Kingdom of Faerghus led by Dimitri. 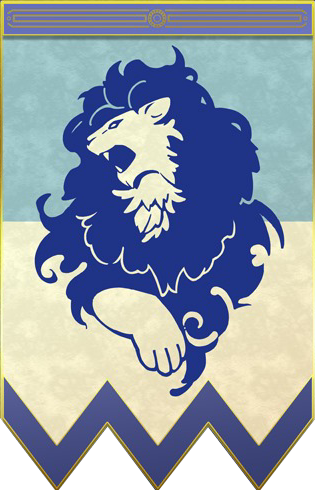 Tropes Associated with the Blue Lions 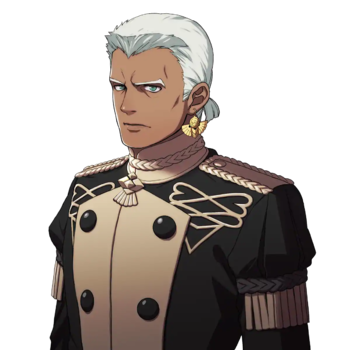 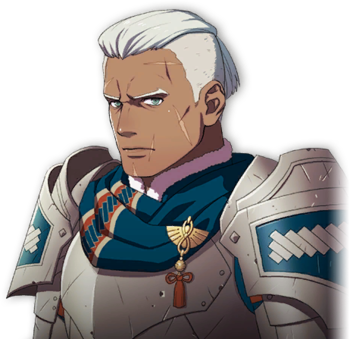 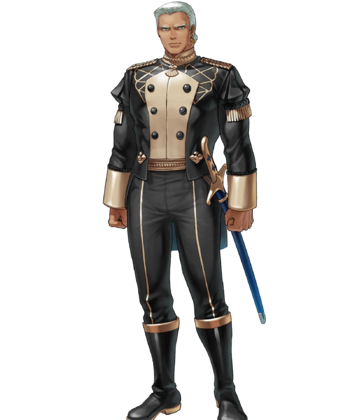 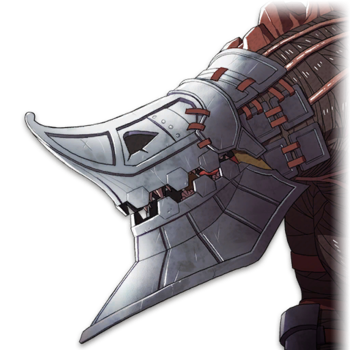 Taciturn Devotee / Dimitri's Vassal
"If you spent too much time around a man of Duscur, there will be rumors."

A commoner from Duscur, a region located in the north-western areas of Faerghus. He owes Dimitri a great debt, and because of it, will protect the prince as his vassal even at the cost of his own life. Despite his stern and stoic appearance, he is actually quite calm and gentle.

His personal ability, Staunch Shield, raises his Defense if he ends the turn by Waiting. 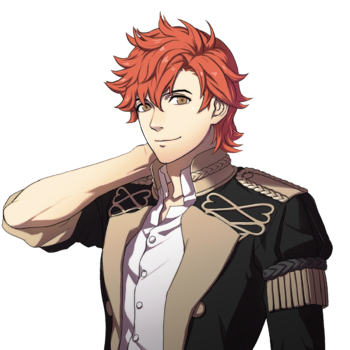 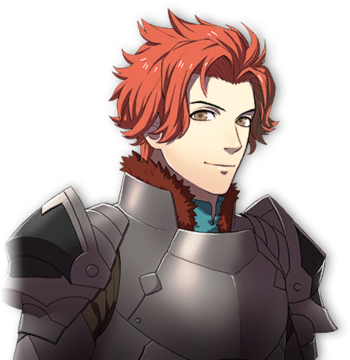 Sincerest of Knights
"Playing around with girls is the most fun a guy can have. Besides, I don't care what you think of me. I don't intend to change how I live my life."

The successor to the house of Margrave Gautier at the border. He cares for his friends, and is admired as an older brother figure in his class, but his fondness for sweet-talking girls is unmatched, such that he has endless troubles. He has an elder brother who was removed as the heir due to not possessing a Crest.

His personal ability, Philanderer, increases his damage and reduces the damage he takes if he is adjacent to a female ally. He also bears the Minor Crest of Gautier, which has a chance to raise his Might when he uses Combat Arts. 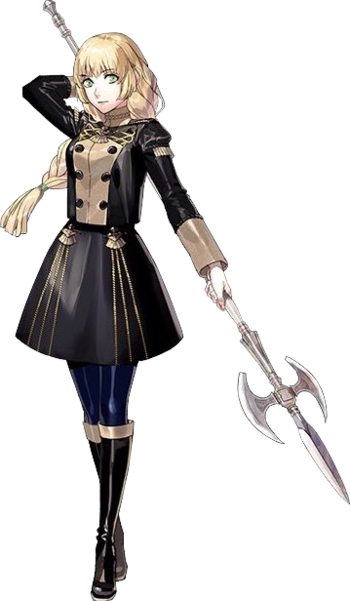 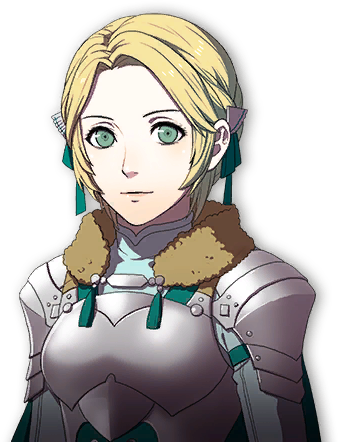 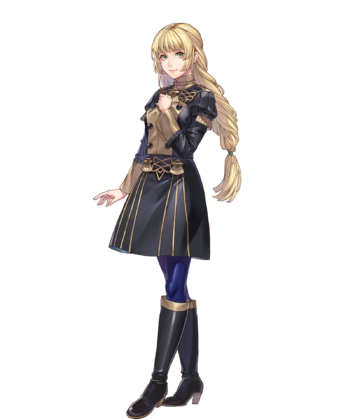 Stalwart Knight / Galatea's Heir
"I'm not a tool for furthering my family's fortunes. I'm a knight at heart. Regardless of what my father desires."

The daughter of Count Galatea and a childhood friend of Dimitri, Felix, and Sylvain. Because of her admiration of noble knights and her inherently serious nature, Dimitri says she's already got a very knightly air to her. However, she forgets herself in the presence of delicious food.

Her personal ability, Lady Knight, increases her Might and Hit Rate when using Gambits. Ingrid bears the Minor Crest of Daphnel, which has a chance to raise her Might while using Combat Arts. 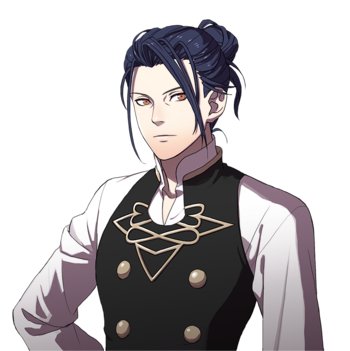 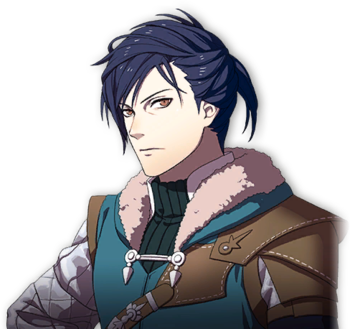 The Shield's Successor/Meandering Sword
"I'm not interested in glory or prizes. All I want is a formidable enemy to sink my teeth into."
The second son of the house of Duke Fraldarius, and a friend of Dimitri since childhood. He is hard to approach and is devoted to honing his swordsmanship to the point he will challenge any strong person he meets to a duel immediately.

His personal ability, Lone Wolf, increases his damage dealt if he does not have a battalion with him. He bears the Major Crest of Fraldarius, which has a chance to raise his Might whenever he uses a weapon.
Mercedes 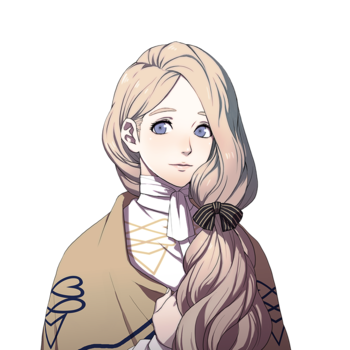 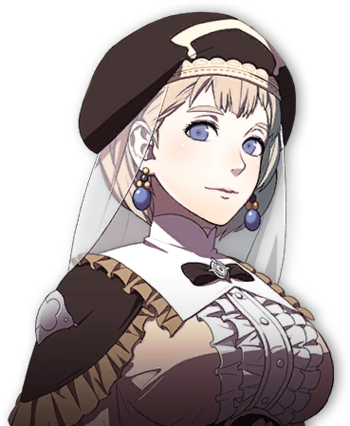 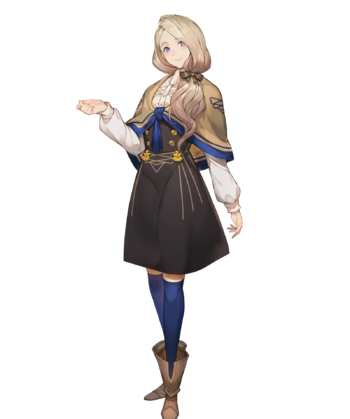 Benevolent Soul / Kindly Devotee
"If you get injured, please simply say the word and I'll patch you up, straight away."

A kind girl, who watches her surroundings closely and can't ignore people in need. She is a former noble of the Adrestian Empire, but chose to live in the Holy Kingdom of Faerghus as a commoner. In Faerghus she once attended the Royal School of Sorcery of the kingdom's capital. She says she is "a bit older" than the other students.

Her personal ability, Live to Serve, restores her health equivalent to the amount that heals an ally whenever she uses recovery magic. She bears the Minor Crest of Lamine, which gives her a chance to conserve a use of recovery magic. 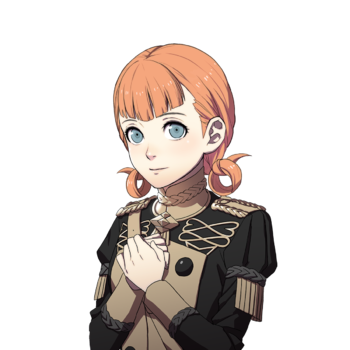 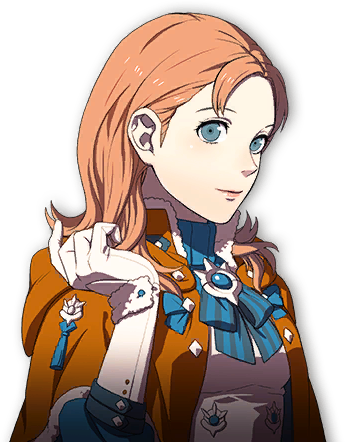 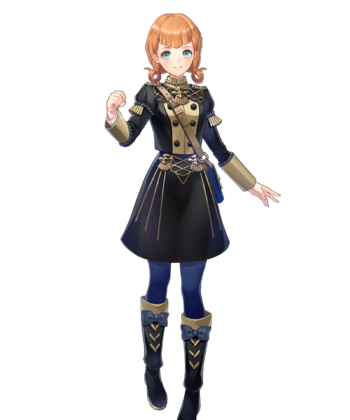 Bloomed Overachiever
"I've gonna find out everyone's likes and dislikes, so I know what to cook. Who knows when it will be my turn at kitchen duty."

The niece of Baron Dominic. She graduated from the Royal School of Sorcery in the kingdom. She's a cheerful and hardworking girl, but there are times when any plans she makes end up going nowhere and fails. She has been friends with Mercedes since their time at the School of Sorcery, and she calls Mercedes "Mercie" while Mercedes calls her "Annie."

Her personal ability, Preserverance, allows her to Rally an ally's Strength. She bears the Minor Crest of Dominic, which gives her a chance of conserving uses of attack magic. 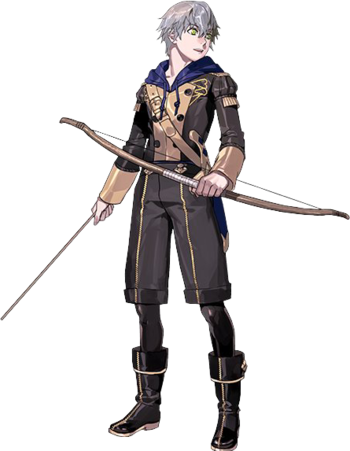 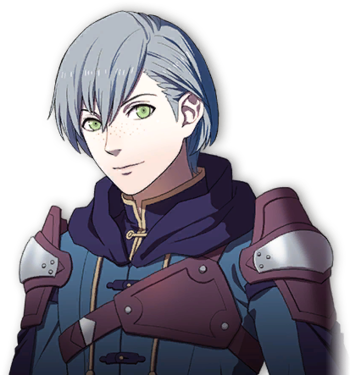 Arrow of Justice
"It's just my daily training. Maybe you could stand to be a little more eager yourself? If I want to be a great knight, I've got no choice but to put the effort in."

The adopted son of Lord Lonato of Gaspard. He deeply respects his adoptive father, given that Lonato took him in despite being a commoner and allowed Ashe to go to the Officers Academy. Ashe is a serious young man who trains and studies hard so he can become an admirable adult like his father.

His personal ability, Lockpick, allows him to open chests and doors without keys.