This page details the first generation characters of Fire Emblem: Genealogy of the Holy War. For other characters, head back to the index here. 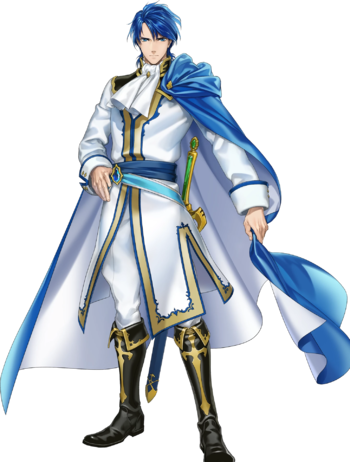 The son and heir of Duke Byron of Chalphy, left behind in Chalphy with a only small retinue of knights while the bulk of Grannvalian forces are off to war in Isaach. His departure to handle the Verdane attack on Yngvi sets off a chain of events which changes Jugdral forever...

A knight of Chalphy, one of the few remaining with everyone else off to war. Loose, relaxed, and something of a womanizer.

A knight of Chalphy, one of the few remaining with everyone else off to war. Devoted and fiery.

A knight of Chalphy, one of the few remaining with everyone else off to war.

The younger half-brother of Arvis of Velthomer. Despite Arvis's warnings to the contrary, he travels to the south to assist in the fight against Verdane and rescue Edain, taking Lex with him.

The son of Duke Lombard of Dozel, the half-brother of Danann, and a childhood friend of Azelle. He accompanies Azelle to assist Sigurd in the fight with Verdane, fully aware that his father would not be happy about assisting the house of Chalphy. 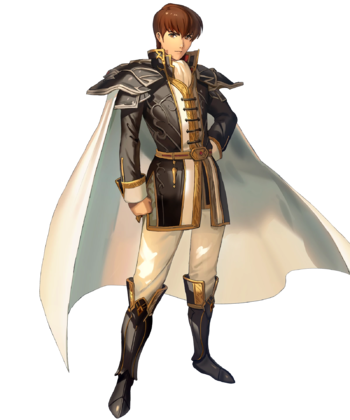 The prince of Leonster, a childhood friend of Sigurd and Eldigan, and married to Sigurd's sister Ethlyn. He accompanies Ethlyn to Chalphy to assist Sigurd. 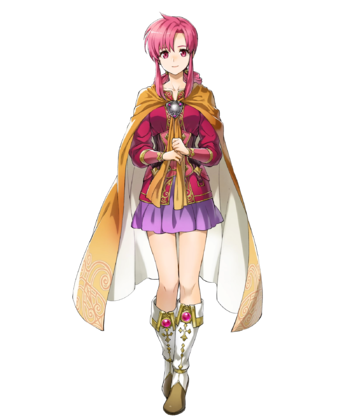 Quan's wife and Sigurd's sister. She sets out for Chalphy upon hearing word of their plight at Verdane's hands.

A fresh knight in the service of Leonster who accompanies Quan and Ethlyn to Chalphy. Seventeen years later, he serves their son Leif as they defend Leonster.

A knight of Yngvi who attempted to protect Edain from the Verdane forces, but was defeated by Prince Munnir. Upon reclaiming Yngvi Castle, he is found by Sigurd and accompanies him into Verdane to rescue Edain.

The daughter of Lord Ring of Yngvi, taken hostage by Prince Munnir; her kidnapping is what kicks off the whole plot, as Sigurd and his knights set off to rescue her and free Yngvi. She is soon freed by Prince Jamke, to find her way back to Sigurd's forces with the help of Dew.

A thief caught and imprisoned by Jamke in an attempt to steal from Verdane's Castle Marpha, he was released by Jamke along with Edain and protected her on the way back to Sigurd, staying with the crew from then on. 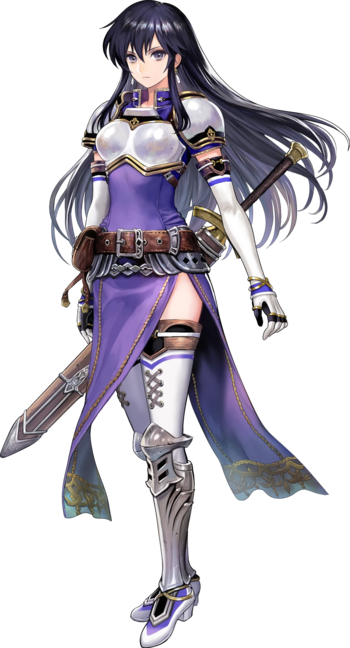 The princess of Isaach, taking refuge in Verdane from her country's war to protect her young half-nephew Prince Shannan upon the request of her brother, Crown Prince Mariccle. Verdane's Prince Cimbaeth forced her to fight for Verdane by holding Shannan hostage, but once Shannan was rescued by Sigurd, she joined the Chalphy army following the downfall of Castle Genoa. 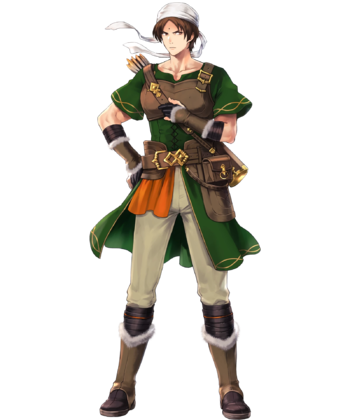 A Prince of Verdane, the younger brother of Cimbaeth and Munnir. Kinder than his brothers, he is the only member of the royal family not under the sway of Sandima. He frees Edain and Dew before departing to confront his father, and is later convinced by Edain to defect to Sigurd's army. 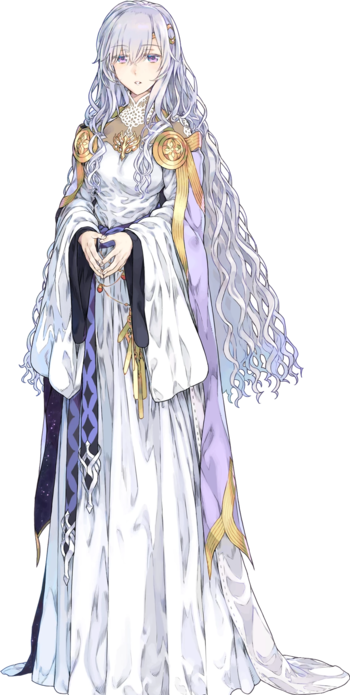 Lady of the Forest

A mysterious girl living in the Spirit Forest of Verdane. She and Sigurd instantly fall in love upon meeting, marrying shortly after the suppression of Verdane. She is later kidnapped by Manfroy of the Loptous Cult...

A gladiator found as the strongest opponent in Castle Evans' pit, and joins the group once he's defeated. He is a distant relative of the House of Isaach. 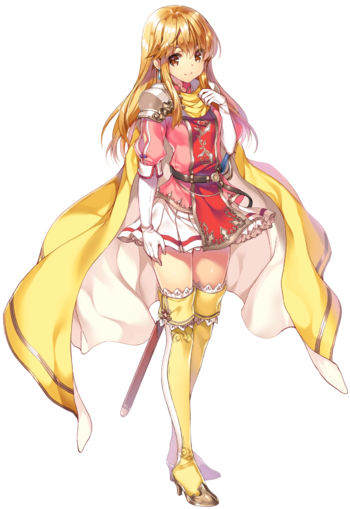 Lionheart's Sister
The willful and hotblooded princess of Nordion, who holds her brother Eldigan in the utmost regard. She joins after Sigurd helps her fend off an attempt by Elliot to conquer Nordion (with the additional goal of forcing her to marry him) while Eldigan is in Chagall's dungeon.
Class: Princess (FE4), Troubadour (Awakening SpotPass)
Holy blood: Hezul [Minor]
Voiced by: Saori Onishi (Japanese, Fire Emblem Heroes), Cristina Valenzuela (English, Fire Emblem Heroes)
Beowolf (Beowulf)

A Conote mercenary partnered with Voltz, hired by Macbeth of Agustria to hold off Sigurd. He is convinced to side with Sigurd... for a small fee. He claims to be an old friend of Eldigan, though how true his claim is is up in the air.
Class: Free Knight
Prince Lewyn of Silesse (Levin, Levn) 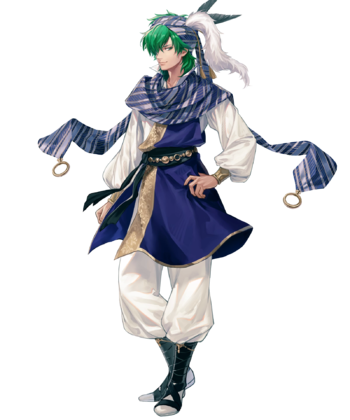 Silesse's errant prince, travelling the world. He is present in Agustria during Sigurd's conflict with it, travelling with Silvia, and sides with Sigurd. 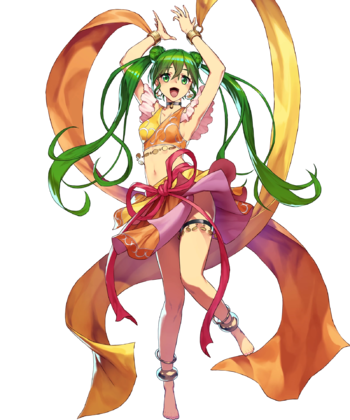 A beautiful and energetic dancer of very shady origins, who travels Jugdral to use her skills to help ease the suffering. During her travels, she met Lewyn, and is with him in Agustria during its fight with Sigurd.

A Silessen pegasus knight searching for Prince Lewyn, looking to bring him home. She is one of the Four Heavenly Knights of Silesse and the sister of Annand.

The leader of the Orgahill pirates, abducted and raised by them at a very young age. She is the missing daughter of Yngvi's Lord Ring, the twin sister of Edain, and the one holding the major Ulir blood in this generation. The pirates turn on her with dissatisfaction at her style of leadership, and after running away, she is reunited with Edain and receives the sacred Yewfelle bow.

Edda's ruler, who traveled to Bragi Tower to pray and learn of the truth of the circumstances of Prince Kurth's death. Accompanied by Tailtiu, the two are cornered by the pirates of Orgahill upon departure.