The games may mostly be non-linear sequels, but that doesn't stop a few characters from showing up in multiple canons. Due to the nature of this page, beware of unmarked spoilers. You Have Been Warned.

Anna as she appears in Radiant Dawn
The closest thing to a Series Mascot the franchise has, Anna is a recurring character who has appeared in every installment of Fire Emblem except Gaiden and its remake Shadows of Valentia. Normally appearing in menus and the like, she occasionally gets story roles like appearing in villages, running tutorials, or being the owner of Secret Shops. In Awakening, she finally graduated into being a full playable character, in addition to maintaining the game's SpotPass functionality as the keeper of the Outrealm Gate and appearing as random merchants on the overworld map. During Awakening, it is revealed that there is more than one Anna, and that the playable Anna is the sister to the Outrealm Gatekeeper and the travelling merchants.

Tropes about the Awakening, Fates, Heroes, Three Houses versions of Anna go on those characters pages, while tropes about Anna generally go here. Tropes about both playable Anna and NPC Anna can go on both.

Jake as he appears in Shadow Dragon and New Mystery of the Emblem.
Anna's love interest. Formerly a citizen of Grust in Archanea during the War of Shadows, he apparently accompanies Anna on her interuniversal travels, including doing a brief stint as one of Fargus's pirates in The Blazing Blade. Despite constantly ending up in combat situations, he regularly laments that he doesn't really have that much of a stomach for it all.
Class: Ballistician (Shadow Dragon and the Blade of Light, Shadow Dragon), Pirate (The Blazing Blade, as a NPC), Warrior (New Mystery of the Emblem)
Naga 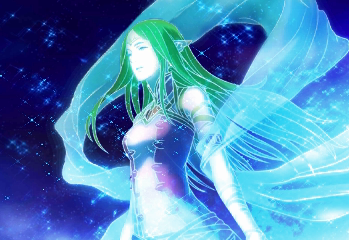 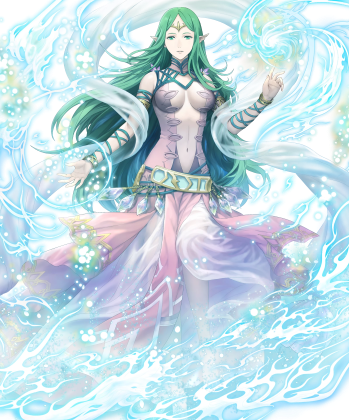 The Divine Dragon King and protector of humanity, although an aloof and distant one. Over the course of the histories of Archanea and Jugdral, she did battle with degenerated dragons, in particular the Earth Dragon tribe. Naga's appointed guardian of the Table, Medeus is an antagonist in the Archanea games, while Loptous, and the Fell Dragon Grima, are both said to be Naga's archrival.

While Naga eventually passed away, she left a lasting legacy on the world. Her bloodline lives on through her daughter Tiki, her reincarnation Nagi, and the royal family of Grannvale in Jugdral who received it through her pact with Saint Heim. The people of Archanea and Jugdral revere her as a legendary god, though both are largely unaware that she was in fact a female dragon. Many a hero has used holy weapons associated with her to vanquish evil — the Falchion and Binding Shield wielded by Marth and eventually the Ylissean royal family, and the Naga tome of Grannvale's royalty.

There may be more then one Naga as it is the title held by any ruler of the Divine Dragons. 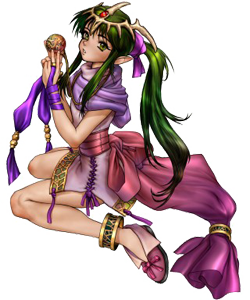 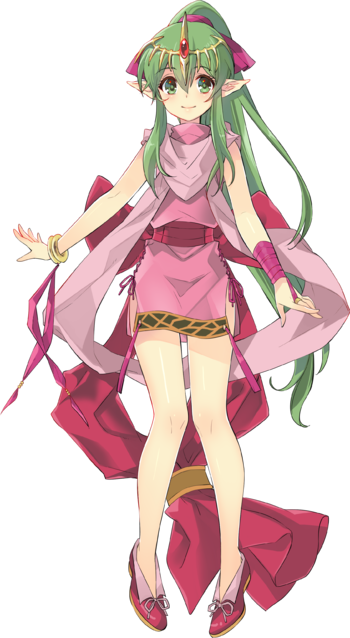 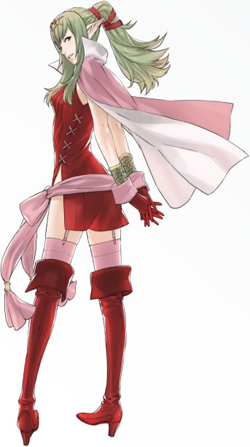 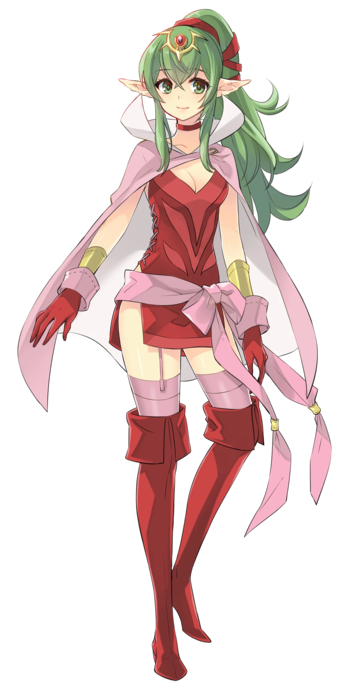 Naga's daughter, and the sole survivor of the Divine Dragon tribe who is still capable of taking dragon form. As one of her last acts, Naga placed her in an unending sleep to prevent her from degenerating into madness like all the other dragons, but she was eventually unsealed by Bantu. The two traveled the world for a time until she was captured and brainwashed by Gharnef. Upon being freed from the spell by Bantu, Tiki joined the Altean army and took a liking to Marth. After the war, she was put back to sleep by Gotoh, but he allowed her to reawaken for good upon confirming that Marth would be able to restore the Binding Shield, which would prevent her from degenerating.

Eons later, Tiki has grown up and is now revered as the Voice of the Divine Dragon in the Valmese Empire. When Chrom's band travels to Valm, she appears before them to task them with restoring the Binding Shield, and aids them in challenging the Grimleal. Has the scariest waking up face in the army. Her birthday is Feburary 28th.

The Deadlords are a collection of 12 warriors introduced in Genealogy of the Holy War, named Mus, Bovis, Tigris, Lepus, Draco, Anguilla, Equus, Ovis, Simia, Gallus, Canis, and Porcus. They once served the Loptous Empire, and later served the empire's remnants, the Loptous Sect. Very little info is given about them in Genealogy (they show up for the Final Boss fight with no explanation), though Thracia 776 explains that they're basically zombies created by the Lopto Sect killing people and corrupting/reanimating their corpses.

In Awakening, the Deadlords are reincarnated by Validar and Aversa of the Grimleal, and some of them are equipped with the Holy Weapons of the Twelve Crusaders. They are deployed under Aversa's command in Chapter 22 to help defeat Chrom, but again fail and are slain. They appear one last time in the "Infinite Regalia" DLC, now 36 in number, where they claim to have fallen in a battle with the fate of the world at stake. It is heavily implied that these Deadlords are in fact the parents from Awakening's Bad Future, with a Fire Emblem Cipher card stopping exactly short of confirming this.

An obscure character of folklore who is mentioned briefly in several games, primarily the ones taking place in Archanea and Tellius, and appears to be something of a patron saint of pirates. He also apparently likes to dance on barrels of rum, according to Robin in Fire Emblem Awakening.

The playable Fire Emblem fighters in Super Smash Bros. for 3DS/Wii U. Since the introduction of amiibo, these sevennote when counting both genders of Corrin characters can appear in compatible games in and outside of Fire Emblem canon together.